As Christmas approaches – and I am still somewhat in denial [mainly because people have been saying “It’s Christmas” for weeks and putting up decorations in November!] – various people ask me what kind of gift I might want. The answer is easy: I do not want anything. I am not sure that I am “the man who has everything”, but I really do have just about everything that I could need or want. All the things that I do want in the world are not available retail – I will not get on to politics, but I guess you can imagine the kind of things that I would really like to see.

Having said that I do not need “stuff”, in this, the latest in my “Six of the best series”, I want to ponder on a few material items that give me pleasure …

I was hard pressed to identify six artifacts that fitted the bill of being favorite things. Surprisingly, most of them are not high-tech gadgets … 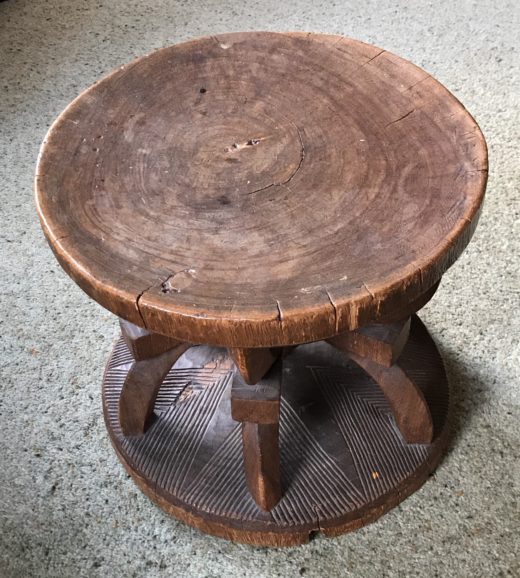 This is probably the oldest item in the house – older than the house itself. This stool, which is carved from a tree-trunk, was apparently the chief’s “throne” in some African tribe. It was reportedly brought back to the UK [i.e. stolen] by the first expedition led by Mungo Park in the 1790s. It was purchased about 80 years ago by my great aunt [I have the sales tag] and has been in my family ever since. It has been around all my life and has always been used on an everyday basis. I sometimes wonder if it has real value and we should be more careful with it.

When my late wife, Linda, and I married in 1980, we were given various items of second-hand furniture. The only new thing that we bought was a bed. Our finances were quite stretched with a new mortgage etc. A few years later – around 1984 I think – we were living in our second house and money was less tight. We were browsing in Habitat [actually in their remainders warehouse], which was fashionable at the time. We loved this big, solid leather-covered sofa – the product name was Hannibal. It was always very comfortable to sit or lie on and stayed with us over the years.

When I moved to my current house in 2010, Hannibal was looking rather sad. Much of the leather was badly worn, but the sofa seemed to be structurally sound. I had two choices: get a new sofa or have this one restored. I opted for the latter, even though it was the more costly option. I queried the high cost of re-upholstering in leather, which was much more than buying a new sofa would be. The guy told me that most leather furniture was covered in hide that had been prepared using some laser technique invented by the Chinese, which enabled three thinner sheets of leather to be made from one thick one. He only used full thickness leather and assured me that the new covering would not need refurbishing in my lifetime. When Hannibal came home, it was clear that the restoration exceeded my expectations – it looked exactly is it did when new, 30 years before.

I have always liked the idea of a large, traditional desk. With lots of drawers etc. Maybe a roll-top. Perhaps there might be secret compartments. In reality, I endeavor to operate a clear desk policy [although, at this moment, I see more clutter than I like] and something simpler is better. What I have is very simple: two trestles with a simple white top. It cost very little money from IKEA. On a good day, the white surface is quite clear and just contains: keyboard and trackpad [both wireless, of course], my tea cup, whichever pair of glasses I am not wearing and a tiny box that makes USB sockets accessible [the iMac is a very slick, tidy design, but the cost of that is all the connectors are at the back, which is annoying].

Although, but maybe because, I normally have just a single cup of coffee – mid-morning – each day I like it to be a good one. With that goal in mind, we have a very good coffee machine. It is a bean-to-cup machine – just press a button and it grinds the beans and makes an espresso. Like any easy-to-use machine, it is very complex inside, but I try not to look. ? It is also very demanding – it always needs more beans, more water or the dregs tray emptying. But it is worth it to have a cup of coffee that better than most coffee shops produce at about 10% of the price.

The coffee machine may be quite smart, but the really high-tech item on this list is my Sonos system. We have speakers in five rooms and they can [independently or in a synchronized fashion] deliver music from our library, or from streaming services [Spotify and Amazon], or radio stations and podcasts. It is controlled from iPhones, iPads or Macs. Theoretically, our newly acquired Echo Dot should make the Sonos voice controlled, but, so far, Alexa has been less than 100% cooperative; the integration is rather clunky, but I am sure that it will improve. 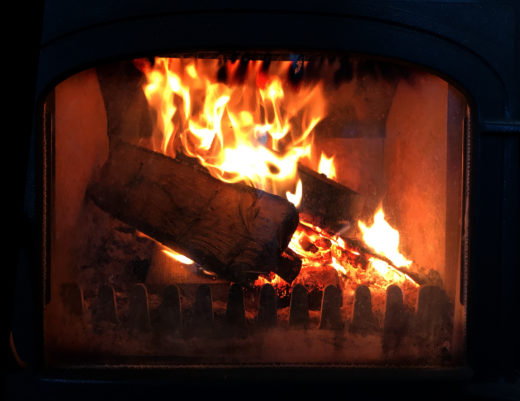 Our house is quite large and, of course, has a central heating system. We run that in the colder months, but not on a very high setting. On an everyday basis, we do not use that many rooms in the house: my office, our bedroom/bathroom and the kitchen/dining room. We spend a lot of time in the last of these rooms, so the heating is supplemented with a wood burning stove. The previous owners of the house had installed a stove, but we had it replaced with a better one. The quality of the stove and the chimney preparation are key to ease of use and efficiency. Lighting it is easy, after some practice, and it delivers about 8Kw of heat, which is quite sufficient. When we first got the stove, I would purchase ready to use logs, which were simple to use, but quite expensive. Over the years, we have cultivated a number of sources of “free” wood – from felled/pruned trees, along with construction timber, like fence posts. The wood is not totally fee, as it needs cutting and storing, but that is quite a satisfying activity. My late father-in-law [a retired farmer] would happily give a lecture on why fire-wood is never “free”!

Safety Certification of Software Modules – What and Why is… July 14, 2022 Standards apply to products, services, and everything in between. Products, processes, services and even people can be certified. According to…
OFF-TOPIC: 12 things done or not December 17, 2020 Each year I make a list of “things” that I plan to do. You might call them “goals”, but I…
Security of Medical Devices – A Changing Regulatory… March 2, 2022 Over the past two decades, medical devices have been increasingly likely to be connected to the outside world using Wi-Fi,…

This article first appeared on the Siemens Digital Industries Software blog at https://blogs.sw.siemens.com/embedded-software/2017/12/14/six-of-the-best-artifacts-in-my-house/