A few weeks ago, I wrote about a technology that was exciting me: what3words. Since then, I have been giving this matter a lot of thought. As I have gone about my usual business – traveling for work, leisure activities, photography-related engagements – I have constantly stumbled across situations where what3words could have made my life a bit easier. I would like to share some of these ideas …

I have been surprised to realize quite how many situations I have found myself in, where getting some accurate directions would make my life easier. 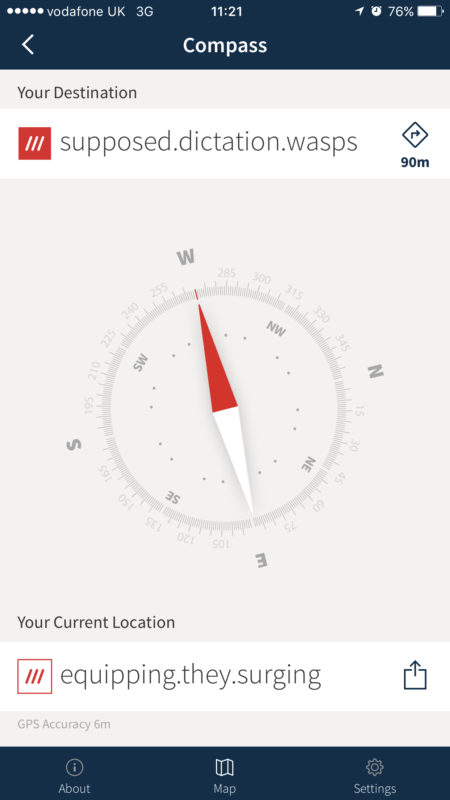 I was recently traveling to a nearby town to deliver a talk at a camera club. They had provided the necessary address information: it was an arts centre and I had the street name and postcode. The GPS took me to the street, but could do no better as a large building typically does not have a number. However, I was in luck – at least, I thought I was – as I immediately spotted a sign pointing at the gate of the arts centre. The gate was locked. As I was quite early, I was not concerned and just parked to wait. As it got nearer to the time of my presentation, I became worried. How could I get in? In due course, I consulted the website of the arts centre and discovered that there was another entrance, without a clear sign, in an adjacent street. This got me to where I needed to be. A what3words coordinate would have done the job a bit more quickly and caused me a lot less stress.

Lost at a festival

Many people love going to music festivals in the summer. There are a couple that we enjoy attending. Most festivals are on large outdoor sites – sometimes they are very large indeed. Often, there are multiple stages and various other facilities to be used and a map is provided to find your way around. A what3words coordinate for each thing would be very useful. At some point, it is likely that people get separated from their companion or their friends. Getting reunited can be challenging, particularly after dark. With a cell phone signal, describing one’s surroundings is OK, but rather hit and miss. Texting a what3words coordinate would be a whole lot simpler.

We recently enjoyed a visit to a large outdoor sculpture exhibition. It was located in the extensive gardens of a country house. A map and a guide to the exhibits were provided, with each item being allocated a number. Initially it was hard to get one’s bearings. Later, finding each item, some of which were a little tucked away, was often challenging. If each piece of work had a what3words coordinate, life would have been simple.

Photography - an update August 6, 2020 Anyone who knows me or that reads this blog will know that a big interest of mine, and my main…
OFF-TOPIC: Expectations vs reality January 14, 2021 I am of the opinion that disappointment is an underrated emotion. Many people do not see to take it seriously.…
OFF-TOPIC: Musing on handedness January 28, 2021 I have always be fascinated by the concept of being right- or left-handed. Almost all of us have this asymmetry…

This article first appeared on the Siemens Digital Industries Software blog at https://blogs.sw.siemens.com/embedded-software/2017/11/16/more-on-what3words/