As a recent convert to the world of Macs, as I have documented before, I am commonly heard to enthuse about my decision to make the move. Some people, who are not among The Converted, have asked me exactly why a Mac is better than a Windows PC. They are generally not satisfied with “They are just better. They work …” and want something more specific. So, I thought that I would endeavor to encapsulate some of the joy in this, the latest of my Six of the Best series …

Overall OS X [I am using its latest incarnation, El Capitan] seems to be a very solid, stable operating system. It is not perfect. I have found odd behavior a few times that has necessitated a re-boot. On one occasion, I needed to call Apple support – that was an amazingly positive experience. I fully accept that software this complex can never be perfect and it would be foolish to expect it, so I am very satisfied. So much for generalities, here are six features [there are more – this is just the first 6 that came to mind] that I particularly appreciate:

Having used an iPad since they were first made available – nearly 6 years now – I still delight at the instant access to information that it affords me. If I want to quickly check email or look up something on the Internet, I just grab the iPad and there is no fuss. Now, I can have the power of a “real” computer available almost as quickly. Compare that with my morning routine with my last Windows desktop PC:

Although I just said that the startup time of a Mac is fast, I do not experience it very often. If I leave my computer for any period of time, I just put it in standby. On the iMac there is just a 3-key shortcut; on the MacBook, I just shut the lid. When I restart, I am up and running in seconds and the only issue, that I have observed, is the need to re-establish a VPN connection, but this is just a sensible security matter. It might be argued that Windows has standby too. However, in my experience, it does not work on desktop PCs at all and, with a laptop, you can shut the lid, but what you find when you open it again can be a surprise. 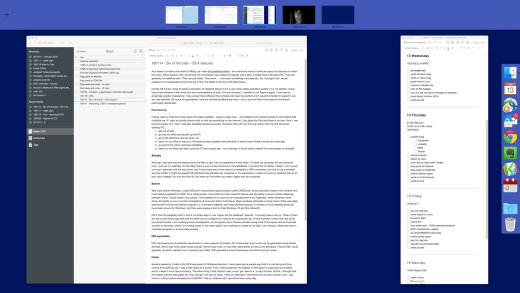 Way back before Windows, I used DOS and I discovered a great product called DESQview, which provided a basic multi-window and multi-tasking capability to DOS. On a small screen, I found that its most powerful feature was the ability to have multiple desktops, between which I could switch very quickly. This enabled me to have all my everyday stuff at my fingertips. When Windows came along, the ability to run a number of programs at once and either minimize or stack windows achieved a similar result. What was really required [for me] was the ability to group 2 or 3 windows together and swap between groups. A number of multi-desktop products have been around for Windows, but they were always a bolt-on [has Windows 10 got this natively?].

OS X has this capability built in and it is trivially easy to use. Apple call the desktops “spaces”. I normally have 5 set up. Three of them house the everyday stuff and the other two are configure as I need to for a particular job. At this moment, I have them set up for two personal jobs. I am reviewing some photographs, so one space has a Preview window using most of the space and an Evernote window to one side, where I am writing notes. In the other space I am working on a letter to my Dad. I am writing in Word and have a checklist alongside in an Evernote window.

PDF documents are an essential requirement in many aspects of modern life. Historically, they could only be generated using Adobe Acrobat, which was never quite cheap enough. Some lower cost, or even free, alternatives turned up for Windows. I found that I could generally do what I wanted, but it could be very fiddly. PDF generation is built seamlessly into OS X and just works. To be fair, I understand that PDF generation is built into Windows 10 and the latest versions of Office

Broadly speaking, Finder is the OS X equivalent of Windows Explorer. I have heard some people say that it is confusing and they cannot find anything. So, I was a little afraid of it at first. Then I discovered that the sidebar is very easy to customize and simplify, which makes it much less confusing. The other thing is that Column view, once I got used to it, is very intuitive. At first, I thought that the instant preview was great, but now, though I still see its value, I have an alternative. Someone told me about Quick Look – just click on a file [or select several] and hit SPACE. This is a feature that I use all the time, every day.

One of my favorite built-in apps is Preview. At first, it seems to be just an easy way to look at image files and PDF documents and it is that, but much more besides – its name really downplays its capabilities. With images, there are lots of facilities to edit and adjust them as well as view in very flexible ways. For PDFs, splitting, merging, rearranging and annotating is a breeze.

My Macs and I have lived together for about six months now. As my life – both work and personal – is very tied up with the use of computers, making such a major move was not something I did without careful consideration. I have really enjoyed finding my way around this new world, but I am sure that I still have much to learn. So, any tips you might have would be gratefully received via comment, email or social media. Thanks.

OFF-TOPIC: The joy of reading November 19, 2020 For as long as I can remember I have liked books and reading. As a child, I was a keen…
Security of Medical Devices – A Changing Regulatory… March 2, 2022 Over the past two decades, medical devices have been increasingly likely to be connected to the outside world using Wi-Fi,…
OFF-TOPIC: Musing on handedness January 28, 2021 I have always be fascinated by the concept of being right- or left-handed. Almost all of us have this asymmetry…

This article first appeared on the Siemens Digital Industries Software blog at https://blogs.sw.siemens.com/embedded-software/2016/01/14/six-of-the-best-os-x-features/