When I was a kid, I tasted some beer and found out that I did not like it. It was too bitter – I much preferred sweet things. In an ideal world perhaps, I would have left it like that – simply labelling beer in my brain as something I did not like. However, I wanted to like it as it seemed to me to be a very grown-up kind of drink for a man to imbibe. I persevered and eventually grew to enjoy almost any kind of brown liquid in a glass. I do not reject other possibilities. I am OK with cider; I very much enjoy wine; I do not really bother with strong liquor. Beer has always been there, in numerous forms and continues to interest as well as refresh me.

The whole culture of beer makes choosing the “best” six challenging, but I will give it my best shot …

If I have a true favorite type of beer, it would be a British ale. This should be a rich brown color. It should have a “head”, but not be too gassy. It should be served at cellar temperature – cool, but not too cold. And it is drunk from a straight side glass by the Imperial Pint [20oz]. However, one of the interesting things about beer is that it seems to be made in just about every country of the world. Different people have a different take on it and beers have evolved that are optimal for the local environment. This is why I like to “drink local” most of the time. So, in Germany I have a wide choice, but would go for the local brewery and, if they have a dark beer, all the better. In France, I might drink Pelforth or maybe something that has crossed the border from Belgium. In Spain, it is San Miguel – which, oddly, I favor at home when I am eating curry. Every country has its own interesting brews. If I listed just the ones that I know about personally, we could be here for a while. Even in the US, where some of the most awful, tasteless, ice-cold stuff is made, there are now many micro-breweries and craft beer makers that are really exciting.

The language of beer aficionados can be as arcane and pretentious as wine buffs’, but I have no interest in talking about the stuff! I do, however, try to find the word for beer in other languages. Some are easy: we have bière, Bier and birra in French, German and Italian. Nordic languages are not too bad: øl, öl and olut in Norwegian, Swedish and Finnish – this is like the English word “ale”. [Interestingly the Swedish “öl” means “oil” in German – that could lead to confusion!] But what about Spanish/Portuguese which is cerveza/cerveja? Where did that come from? I believed that the answer is from Arabic, but it looks more likely that it was a word created to honour the Roman goddess of the harvest Ceres. I found an interesting article on the etymology of the word here.

On to the beers that I enjoy. This is not necessarily my “top 6” and they are not really in a particular order – although the first one is my all time favorite and would be my desert island beer.

Wadworths 6X was a beer I first got to know when I left home to go to university. It was the first truly local beer that I experienced and, in those days, it could not be obtained outside of quite a small geography. Nowadays, the technology of storage enables it to have a wider reach. I smile to think that I have been imbibing it for about 40 years … 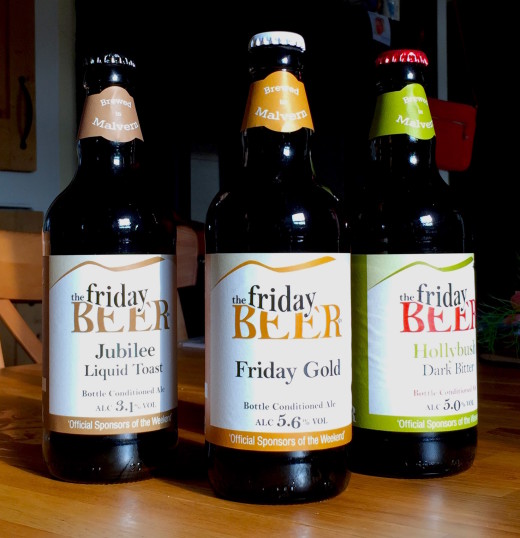 The Friday Beer Company are located less than a mile from my home and are quite new. The company was set up by some scientists, who had been laid off and were looking for something interesting to do. So they decided to brew beer using traditional techniques, but applying modern technology where it was appropriate for efficiency and quality. The do a range pf 6 or 7 different beers in both bottles and casks and seem to be quite successful. Their strap-line is “Official Sponsors of the Weekend.” I like that.

Dragon’s Blood is a beer sold in my favorite local pub – The Nag’s Head. This pub has a very good range of beers, an excellent atmosphere and efficient staff – you do not go thirsty for long in the Nags. This beer is what I commonly choose. It is made just a few miles away, so it is still local. The brewers describe it thus: “Chocolate and crystal malt combined to give a ruby red coloured beer with a hint of chocolate.” [When I first read this I thought it said “crystal meth”. :-)]

BrewDog is a brewer and a chain of bars, in which I recently made an investment. Their range is very eclectic and I hope that my enthusiasm will assure everyone that I am not stuck in my ways too much!

Gammal Brygd was a rich, dark bottled beer made in Stockholm, Sweden. The name means ”old brew”. I used the word “was” because it is sadly no longer produced. The best barman in the world always knew that it was my favorite and would have it ready as I approached the bar. One day he told me the sad news that the beer was no longer available. He gave me a glass as a souvenir and a Swedish friend found a bottle of Gammal Brygd in his cupboard, which he kindly gave to me to savor for one last time.

Guinness is a name that is familiar to everyone. For me, it is a great stand-by. I can go into just about any pub in the UK [and much of the world] and, if there is nothing else to my liking, have a pint of Guinness and be quite satisfied. It is very rare to get a bad pint of the Black Stuff. Of course, in Ireland – and particularly in Dublin – it is the clear #1 choice. I am told they brew it differently for the home market and I can say it definitely tastes best close to home.

OFF-TOPIC: Musing on handedness January 28, 2021 I have always be fascinated by the concept of being right- or left-handed. Almost all of us have this asymmetry…
OFF-TOPIC: 12 things done or not December 17, 2020 Each year I make a list of “things” that I plan to do. You might call them “goals”, but I…
Security of Medical Devices – A Changing Regulatory… March 2, 2022 Over the past two decades, medical devices have been increasingly likely to be connected to the outside world using Wi-Fi,…

This article first appeared on the Siemens Digital Industries Software blog at https://blogs.sw.siemens.com/embedded-software/2015/09/10/six-of-the-best-beers/