I like food. I am not a great enthusiast for restaurants, in general, but I do like to eat. I enjoy cooking and, at the time of writing, I am planning for a supper with friends on Friday evening – I think a French theme is in order. I watch very little TV and I am certainly not an avid viewer of cooking shows. However, a few times recently, I have been persuaded by other members of my family to watch The Great British Bake Off.

On one of these shows the other day, I learned something surprisingly interesting …

In this program they were talking about making different types of biscuits/cookies. Apart from the participants in the show having to bake various things, they also have short “packages” where they discuss some background. In this case, they showed how ice-cream cones are made and described their history.

We are all familiar with the standard conical wafer that we call an ice-cream cone. They vary in shape a little and can be quite soft or very brittle, but they are the ubiquitous edible food packaging. But it was not always like this. 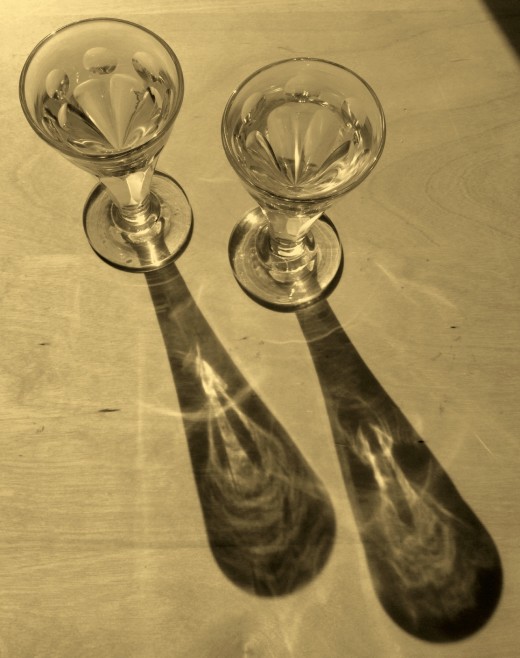 In the late 1800s, ice-cream was becoming popular in the UK. It was served in small, conical shaped glasses called “Penny licks”. I suppose this gives a clue to the product price point. These glasses had a solid base, to avoid being top heavy when filled with a scoop of ice-cream. The hole on top was a deep pointed [inverted] cone. People would buy a penny lick, consume the ice-cream and return the glass to the vendor for re-use. Cleaning was less fastidious than we might expect today and, also, the point of the cone would always be hard to reach. The result was frequent instances of disease passed on by these glasses. One day, someone [I cannot determine who] invented the wafer cone, very like what we use today.

Many years ago – I think it was after the death of my grandmother – various pieces of old glassware came into my possession, including two small glasses that had an odd shape. I now know that I am the proud owner of two penny lick glasses. If it were not for the very autumnal weather we have just now, I might even deploy them for their original purpose [using a modern dishwasher to ensure their cleanliness].

OFF-TOPIC: The focus on food December 10, 2020 In this extraordinary year, many people have been thinking about food. Some do not have enough - which, in rich…
OFF-TOPIC: How many words? March 11, 2021 I am fascinated by language and communication. Because I am British - or, rather, English, to be precise - I…
Medical Devices and the FDA, a History of Change August 26, 2022 As you probably know, devices of all types continue to get more complex, more interconnected, and in the world of…

This article first appeared on the Siemens Digital Industries Software blog at https://blogs.sw.siemens.com/embedded-software/2014/08/28/how-about-a-penny-lick-ice-cream-the-victorian-way/