When I first visited California, in March 1986, I was looking forward to the sunshine. I was there for 4 weeks and, for the first 7 days, that was what I got. For the remainder on my time, it either rained or drizzled. As a Brit, I am somewhat obsessed with weather, which I partially explained here some time ago.

Visiting California again last week, the talk was all about the recent drought …

In the UK, we have just had the wettest winter on record. There has been lots of flooding and the slightest shower now makes everything soggy, as the water has nowhere to go. So, California promised to be a contrast. I had read reports that the drought has lasted around 2 years so far and matters are becoming quite serious across the whole state. I have seen many news reports which include pictures of reservoirs that are way below their normal levels.

When we landed in San Jose about 10 days ago, it was pouring with rain. Our taxi driver cheerfully told us that it had been doing this for some days and the forecast was for more of the same. He was very pleased because he was sure that this would top up their supplies and they could get back to normal. I decided not to bother explaining that they needed a bit more than a couple of heavy showers to address the problem. As it turned out, the forecast was slightly out, as we mostly had OK weather.

I am constantly amazed that water is wasted in such huge volumes. Some example:

But all was not lost – I discovered that a local restaurant is doing its best to help: 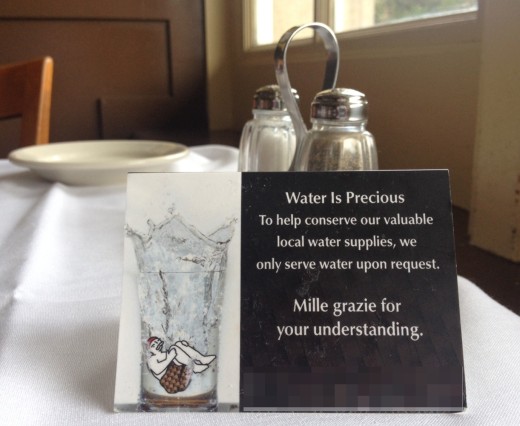 However, once you have a glass of water, it is constantly refilled from an bottomless pitcher …

OFF-TOPIC: The change of day length February 4, 2021 On the worst of Winter days - when it is gray and damp - I long for Summer. I fantasize…
OFF-TOPIC: Lost and found February 18, 2021 When I come into the house, I hang my keys on the hook. If I want my keys and they…
OFF-TOPIC: End of an era February 25, 2021 In 1986, when I started my job at Microtec Research, I visited the United States for the first time. Specifically,…

This article first appeared on the Siemens Digital Industries Software blog at https://blogs.sw.siemens.com/embedded-software/2014/04/10/california-drought-how-water-is-wasted-in-huge-volumes/