We live in a stressful world. Do you know anyone [who is in full possession of their mental faculties and not dependent on some substance or other] who is not under stress at least some of the time? No, me neither. It was many years ago that I figured out exactly what stress really is. But that did not enable me to eliminate it.

However, I could take a look at some causes and try to address them …

Having figured out that it is all about being in control [or, at least, having the perception that you are in control], I looked to identify areas of my life that were out of control and could be improved. My own management of time and work was the key thing that I concluded would be worth an overhaul. At that time, I read about and, in my own way, implemented the 4 Ds Principle. 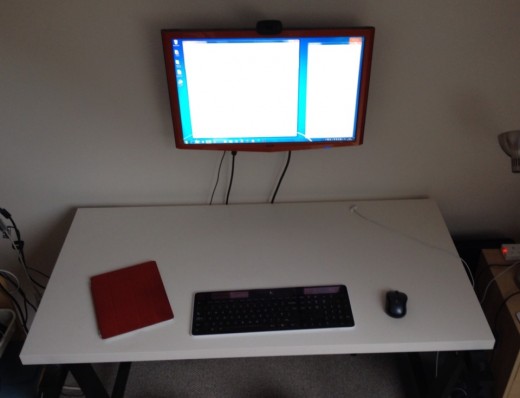 Using this technique has served me well. I mostly have a clear desk [as you can see] and my email inbox contains, at worst, a handful of messages. So far, so good. In order to manage my time, I have used two [obvious] tools – a calendar and a ToDo list – to which I refer constantly. Over the years, the specific technology that I have used has changed, but the principle of usage has not. Currently I use Google Calendar and Toodledo – these both have the advantages of being free, they are simple and work well and they are readily accessible from PC, iPad and phone.

This traditional approach has always had a small problem: both the calendar and the ToDo list go on for ever [or, at least, for an indefinite period into the future]. This is a problem because just looking at them can be daunting – just so much stuff! That feeling in itself is a distraction and leads potentially to a lack of focus, so, a while ago, I came up with the idea of a Week Plan.

The concept is trivially simple. Each week [currently I routinely do this on a Friday], I draw up a plan for what the next week will look like. There are simply 7 headings, Monday – Sunday [Why do US calendars so commonly start on Sunday, which, for most people, is the last day of the week?]. By reference to my calendar and ToDo list, I fill in what is planned for each day. Then I just refer to this plan as I work through the week. I have included an example here [which probably gives you a greater insight into the mundane aspects of my life than you need].

The Week Plan is a living document – things get changed and moved about or even deleted [although canceled things often get a strike-through, as this leaves a record of my plans]. That is just how life is. But, for me, this gives a feeling of containment [within a week] and some confidence that I will get the right things done at the right time.

Sometimes I prepare a plan ahead of time – either completely or just inserting a few new things that are not in the distant future. I do not have a religious attachment to dealing with it on a Friday – that just happens to frequently be convenient. If new things come up for attention in the future [beyond this week], they go into my calendar/ToDo and, hence, into my Week Plan in due course.

My current tool for preparing Week Plans is Evernote [I have used other things in the past]. This fits in well with the way that I work and it supports check boxes, hyperlinks and attached documents. I can also easily access it from anywhere. The plans are in their own notebook with titles derived from the date – this week’s is called 130930. A spin-off advantage of this approach is that I have a historical record of what I have done and when. With Evernote’s very powerful search capabilities, I have a good way of locating and tracking past activity.

OFF-TOPIC: 12 things done or not December 17, 2020 Each year I make a list of “things” that I plan to do. You might call them “goals”, but I…
Security of Medical Devices – A Changing Regulatory… March 2, 2022 Over the past two decades, medical devices have been increasingly likely to be connected to the outside world using Wi-Fi,…
OFF-TOPIC: Lost and found February 18, 2021 When I come into the house, I hang my keys on the hook. If I want my keys and they…

This article first appeared on the Siemens Digital Industries Software blog at https://blogs.sw.siemens.com/embedded-software/2013/10/03/the-week-plan/