Last Saturday, we had an interesting day out. It all started because Libby’s mother was going to the US and

we needed to get her to the airport at a ridiculously early hour. One morning a few weeks ago, I started thinking about how we might spend the rest of the day, taking advantage of the fact that we would be at the airport so early. I perused all the flight departures scheduled for a Saturday morning, looking for a destination that might make sense for a day trip [as we had commitments on Sunday]. We hit upon Dublin and, within about 30 minutes of having the idea, the tickets were purchased. It is the most spontaneous air travel I have ever experienced.

I have been to Dublin quite a few times on business, but never as a tourist. So, I thought I might share my experiences and impressions …

Our flight got into Dublin bang on time and it was a beautiful day. My first impression was very good, I found that I could get a bus ticket for €10 that would take both of us to the city and back on a frequent bus service. It was also possible to use the ticket to get around the city on local buses. This seemed excellent value. 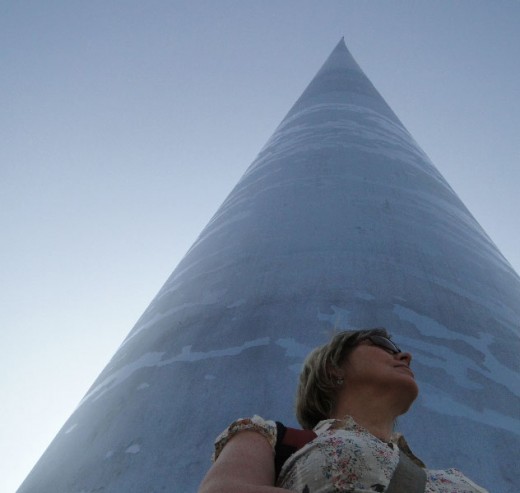 On arriving in the city, one of the first things we saw was the Dublin Spire in the middle of O’Connell Street. It is a needle-like structure nearly 400 feet tall. It was planned to be installed for the Millennium, but was actually finished a couple of years late. The official name is the “Monument of Light”. Apparently the local names are “The Rod to God” and “The Stiletto in the Ghetto”.

We took the tour bus to get a broad impression of the city. This bus had a commentary about all the sites, buildings and monuments on the route and the driver would provide interesting anecdotes and stories as we went along. The system is very flexible – you can get on and off of the buses all weekend. We did the entire circle and then stopped off to look around.

The most significant site we visited was the gaol [or jail, if you prefer]. This was an important location in Ireland’s history and we were provided with a guided tour. I was wary of this, as I have been on tours where I have felt trapped and the tour is boring and goes on far too long. This was not like that. The leader had the pace just right, she spoke clearly and was very knowledgeable. I was interested to learn some Irish history in context. My favourite random fact was the origin of the Irish “tricolour” flag: the green represents the republicans [who wanted to separate from the UK], the orange represents the unionists [who did not] and the white represents peace [between them].

Sadly, a strong overall impression we had of Dublin was that it was expensive. Partly, this was because it is just an expensive city, but also the Euro is rather strong against the pound, which makes it worse. I had to sample a couple of pints of Guinness [obviously!], but at something like €4.50 a pint, I was unlikely to get drunk.

I have always found Ireland an interesting place because it is very like home [they speak English and drive on the correct side of the road], but also “foreign” in small ways: the money, obviously; signs tend to be bilingual; also features like traffic management are different. I was taken by the pedestrian crossings, which made a pleasant noise when the green man was lit and had a clear countdown timer; unlike similar ones in the US, they do actually give you enough time to cross the street without having to sprint.

Our last port of call for the day, before heading back to the airport, was to the Winding Stair. I had heard about the place and wanted to visit. Years ago, it was a well known bookshop and cafe, which was frequented by writers. Its closure in 2005 was widely seen as bad news, but, soon after, it was acquired by a new owner and re-opened. It still has a charming, eclectic bookshop and the restaurant upstairs is excellent. We had our dinner there and enjoyed the food, ambiance and friendly service.

It was a long day – we were up at 3:00 and did not get to bed until midnight – but worthwhile. I was surprised to see several familiar faces on the return flight – we were not the only ones to think that Dublin was a good place for a day out.

OFF-TOPIC: Lost and found February 18, 2021 When I come into the house, I hang my keys on the hook. If I want my keys and they…
Real books vs e-books July 30, 2020 I recently saw a Facebook posting by a friend: “Share this if you love real books.” My initial [and enduring]…
Security of Medical Devices – A Changing Regulatory… March 2, 2022 Over the past two decades, medical devices have been increasingly likely to be connected to the outside world using Wi-Fi,…

0 thoughts about “A good day out”

This article first appeared on the Siemens Digital Industries Software blog at https://blogs.sw.siemens.com/embedded-software/2010/05/27/a-good-day-out/