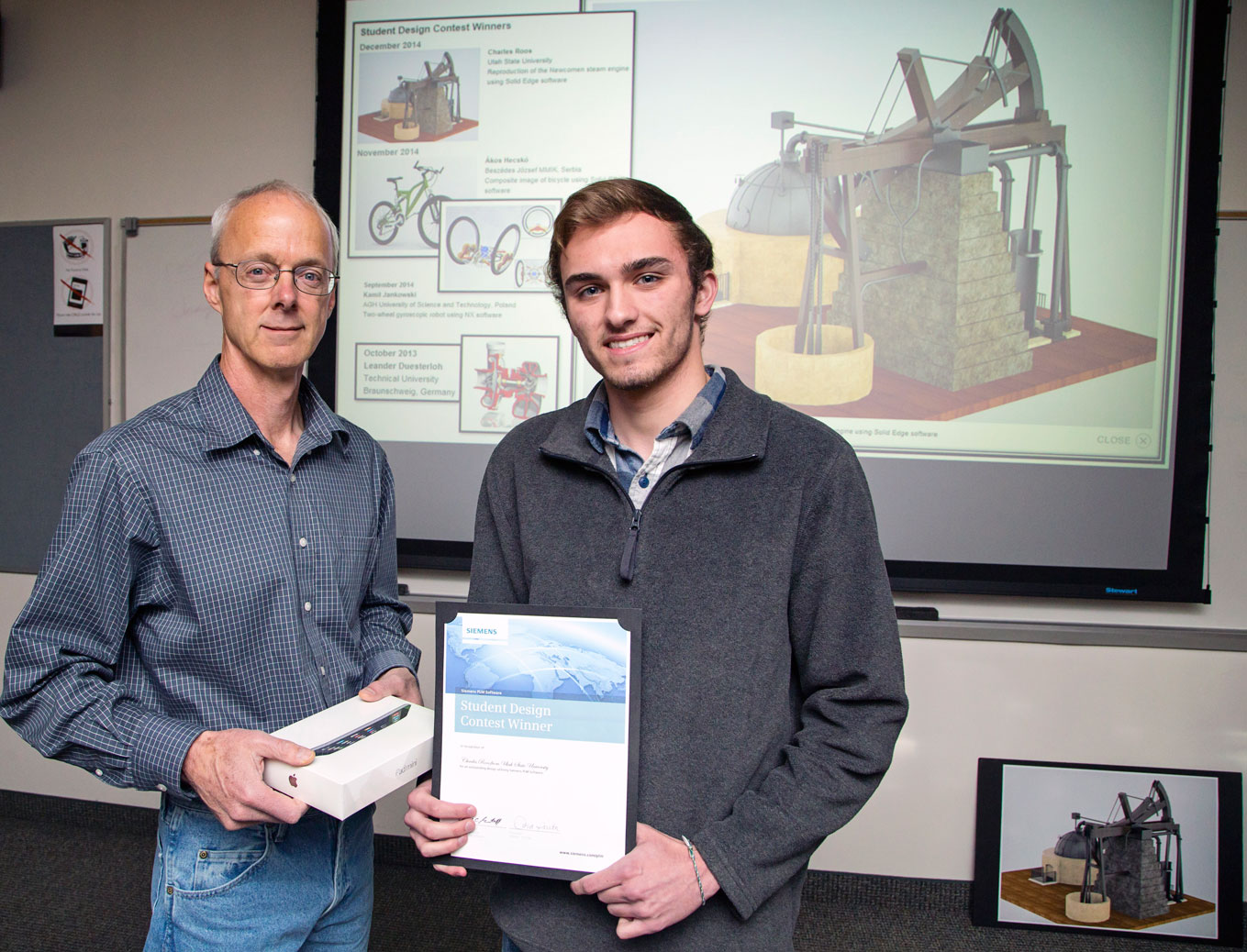 When Charles Roos turned in the assignment last December, his instructor, Jonn Devitry, not only gave him high marks, he recommended Roos submit the design for consideration in an international design competition hosted by Siemens PLM Software. The contest is held to honor emerging engineering and technology professionals who use Siemens’ Solid Edge computer-aided drafting software.

Roos’ project beat out the competition and won top honors in the Siemens PLM Student Design Contest. His rendering is slated to be part of a Siemens calendar that will be published for 2016. Being recognized by Siemens, said Roos, helped convince him that engineering is right for him.

With only photographs to use for reference, a Utah State University student created an award-winning draft of an 18th century steam engine that was once owned by Henry Ford.

Roos is a freshman in mechanical and aerospace engineering at USU. As part of a final project for his fall 2014 engineering graphics course, he was asked to create a 3-D rendering of the Newcomen steam engine – an English relic that experts say helped power the early stages of the Industrial Revolution. The engine was later donated to Henry Ford and is now on permanent display at the Henry Ford Museum in Dearborn, Mich.

“It was a really big confidence booster in my progress through college,” he said. “I sort of fell in love with designing this thing, and I became somewhat of a perfectionist in how I designed and assembled everything.”

Devitry praised Roos for his attention to detail – pointing to the smallest elements in his design.

“Charles just had an aptitude and motivation to want to succeed,” he said. “What I’ve found is that being a successful student is not about being the smartest kid in class. It’s about having the desire and passion to finish something. And we in the engineering industry want to work with people like that.”

Museum officials at The Henry Ford confirmed that there are no known detailed drawings of the Newcomen steam engine. Devitry is working closely with the organization to pursue future projects and get more young engineering students interested in seeing the engine and other innovative machinery up close.

“There are so many pieces to engineering,” he said. “But designing something is really the first part. It’s the core piece of the puzzle, and it requires collaboration and creativity.”

Roos received an iPad mini and plaque for his accomplishment. Siemens’ Solid Edge design software is an industry-leading tool used by professional engineers and designers.

This article first appeared on the Siemens Digital Industries Software blog at https://blogs.sw.siemens.com/academic/utah-state-university-engineering-student-wins-design-contest-for-modeling-antique-steam-engine/