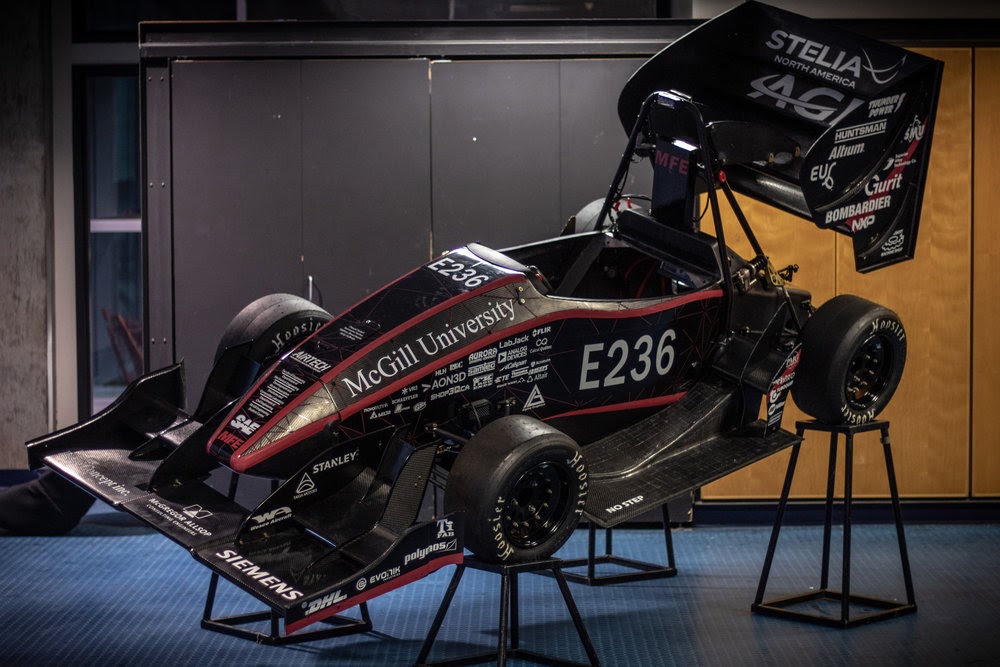 Who is McGill Formula Electric?

Their early electrical team success inspired McGill to merge their combustion and electric teams into one single design team named “McGill Formula Electric”. Due to advancements in material development and the market evolving towards renewable resources, both teams elected to combine knowledge and resources to produce a single formula-style, open wheel, electric prototype with a full carbon fiber monocoque. This generated a new series of vehicles called the MFE 19, MFE 20 and the upcoming MFE 21. The MFE 19 was more of a prototype to build off for the MFE 20 and therefore did not compete in any competitions. The MFE 20 focused on improving the  prototype by increasing reliability, and weight savings. In 2019, the MFE 20 placed 1st overall at FSAE Electric, as well as finishing 1st in design and setting a new North American acceleration record of 3.68 seconds at the same competition.

Even through team sports, individuals consistently stand out when they’re able to take on a leadership role and guide their team in the direction of success. Passionate students who take initiative have the opportunity to make their mark on the FSAE world. One of those students was Lucas Crea. In 2014, Lucas attended McGill University for mechanical engineering, with a huge passion for motorsports. Born and raised in Canada, Lucas was seeking a career in aerodynamic design and wanted to join McGill’s FSAE team to expand his knowledge in the field. There were two FSAE teams to choose from at the time, one combustion and one electric – he joined the electric team. Although McGill was on a trend of success, Lucas noticed there wasn’t an aerodynamic sub team. This was a problem for the team and for the hands-on experience he wanted. The problem-solving side of Lucas was activated immediately, and he took on the lead role for the creation of a new aerodynamics sub-team. Lucas had to begin learning and studying 3D CFD simulation. CD Adapco (later acquired by Siemens) at the time was sponsoring McGill and granted them licenses for STAR-CCM+ so that’s when Lucas began learning it intensively.

This simulation experience allowed him to apply for an internship at Siemens Energy in Canada. The Siemens office in Montreal designs gas turbines for industrial energy production. They were trying to transition their workflow to STAR-CCM+ for their aero and thermal simulations. Given Lucas’s experience, they brought him in to develop that workflow and even teach STAR-CCM+.

So there he was, just a second year undergraduate student teaching professional engineers how to use this highly advanced CFD package. The internship provided tremendous experience on thermal analysis and rotational fluid simulation which he brought back to the team. He was able to develop a vehicle cornering simulation which is vital in Formula SAE competitions because of all the sharp turns your vehicle goes through. Lucas commented, “This, to my knowledge, was actually the first turning-aerodynamic simulation among North American teams, which earned us major design points in competition.” In 2018, during his senior year at McGill, Lucas was able to apply all his new software knowledge to their latest vehicle. That model competed in the Formula SAE North/Canada event, and achieved an impressive 1st place in design judging and a 2nd place finish overall, making it one of the most memorable wins since his enrollment.

A career opportunity came up shortly after he graduated to continue his simulation focus – and that was to join Siemens DISW as a software developer in simulation tools. He is currently programming the back end of an electromagnetic simulator to do post processing for low frequency electromagnetics. Lucas stated: “I am very grateful for my experience with Siemens Software through Formula SAE which essentially prepared me for a great start to my engineering career.”

Although Lucas has moved on into the professional world, the team has remained competitive and has worked to improve their design every year. This year, the McGill Formula Electric team learned how to integrate VeSys and NX. The two packages integrate the connectivity from the wiring diagram in VeSys and import it into the NX 3D-CAD model of their composite chassis. This helped them a lot because they don’t have to spend hours updating each wire manually. They then developed a list of functional requirements that the schematics and wire harness must meet while powering and connecting all sensors and components on the car. Then a series of reviews ensured all signals were included, before it was integrated with the chassis using VeSys and NX integration.

Using the routing feature of NX they can clearly define the paths wires can take through the carbon fiber chassis. By default, the devices and connectors created on diagrams have pin name conventions that differ from the pin names used for their library of connectors. Using VeSys components application, they defined the library part numbers for the connectors with custom labels. Then they edited the object’s properties and selected a part number for it; VeSys automatically renames the pins according to how they were defined in the Components library. This sped up their workflow by automating the pin-naming process. When the wiring diagram was completed & verified, the wires were then added to the NX model of the chassis. They were then able to integrate the harness directly into NX, which greatly reduces the time to design the harness, while also eliminating errors from manual routing.

STAR-CCM+ has been essential for  redesigning the aerodynamics package for increased downforce and cornering performance. This was a key part of their ‘digital twin’ engineering methodology.  They run the CFD simulations on computer clusters available to universities in Canada. Siemens’ HEEDS application enabled automation of many simulation scenarios saving both student labor and finding more optimal downforce versus drag solutions. This translated directly to improved racecar performance.

NX performance and capacity was superb, enabling whole-car modeling, compared to other teams using Solidworks, who can’t even load their entire car design. They also appreciated the productivity of synchronous modeling vs. history-based modeling. Another useful capability of NX is the graphical rendering features to create clear and compelling images. This allowed them to highlight different aspects of the car and break down all the information for their team and SAE judges. They were pleased with how NX is so integrated with Simcenter simulations, because it reduces the amount of work and complexity versus dealing with different point tools. They could run FEAs for strength analysis so easily because of the integration.

They use Fibersim extensively for the carbon fiber chassis design as well as the wings in the downforce package. To design a new chassis geometry they used Fibersim hand-in-hand with their surfacing design in NX to ensure manufacturability of the chassis. This was a more seamless approach rather than doing regular surfacing in isolation and then seeing if it works with carbon fiber. Fibersim is also unique in that it actually simulates the composite fabrication process, spotting fabrication problems before actual fabrication.  The savings in both materials cost and student labor were very significant. Some FSAE teams have saved as much as 40% of their usual carbon material costs due to 1st-time fabrication success, a tangible benefit of digital twin style methods.

As we all know, COVID has made this year extremely challenging for everyone and FSAE teams have had to adapt to a completely new set of obstacles. One of the most common issues FSAE teams must overcome during covid is communicating and keeping the entire team engaged when constructing projects despite their isolation at home. McGill battled with team turnover because of the difficulty of getting things done virtually and it took a lot of the fun out of it for some of the team members. Adapting to working remotely was definitely a challenge to them, they really had to find creative ways online to collaborate accurately within the team to avoid any other team members leaving. One of the solutions they used for communication was Microsoft TEAMS, which is provided to them by the University. They hosted social gatherings weekly in order to keep the team up to date and engaged.

Their most recent competition was Formula SAE Virtual 2020 which presented unique constraints from Covid. The virtual judging time format was much tighter. They had about an hour and fifteen minutes for the virtual meeting, instead of the usual 2-3 hours for in-person judging. This tested the consistency and flow of their presentation. Review sessions were more difficult as well, for example being able to ask and answer simple questions took much more time virtually. They were also split into breakout rooms based on the scoring sheet categories, so team members had even less time to explain their specific focus. Team captain Aidan Gerkis explained, “This tight and fast presentation style was an aspect we could improve on for the future.”

A couple team members going over their NX design via Microsoft TEAMS.

This article first appeared on the Siemens Digital Industries Software blog at https://blogs.sw.siemens.com/academic/the-evolution-of-mcgill-universitys-formula-sae-student-team-to-the-top-tier-of-n-american-competitions/