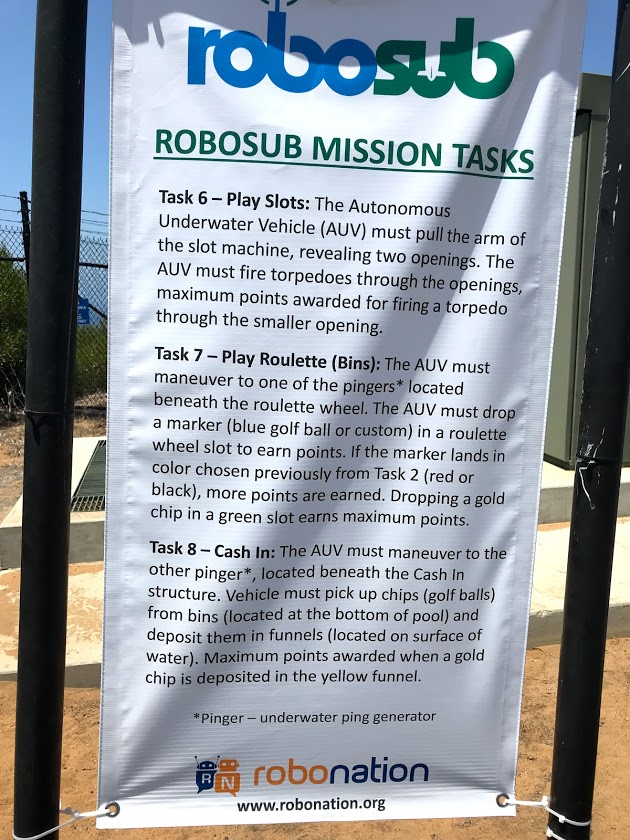 With 47 teams ranging from middle school through the world’s premier graduate engineering programs, the TRANSDEC testing facility at the Space and Naval Warfare Systems Center Pacific was buzzing with excitement from July 30 through August 5th of this year! While this was Siemens first year as a sponsor of this fantastic event, Robosub has been challenging students to build Autonomous Underwater Vehicles (AUV) for 21 years!


Student teams really hit the jackpot with their designs! The vehicles had to find their way to the entrance, Shoot Craps (touch buoys), Play the slots (manipulation/torpedoes), Play Roulette (drop markers), and Cash In (retrieve objects, surface, move/release objects). Along the way, there were two locations to purchase extra chips for teams who needed a little extra luck! Because these highly complex vehicles require so much work, the most successful teams have found it beneficial to divide their efforts into functional areas covering Mechanical, Electrical, Software and Project Management – exactly like their counterparts in industry might do. The teams compete for cash prizes as well as recognition in several areas. 2018’s winners are:

You can watch all four+ hours of the finals here!

Congratulations to all of the winning teams. Siemens is incredibly excited to work with such outstanding young engineers!

Were you at Robosub? Are there other marine competitions we should know about? Let us know in the comments below!

This article first appeared on the Siemens Digital Industries Software blog at https://blogs.sw.siemens.com/academic/student-engineers-make-a-big-splash-at-robosub-in-san-diego/