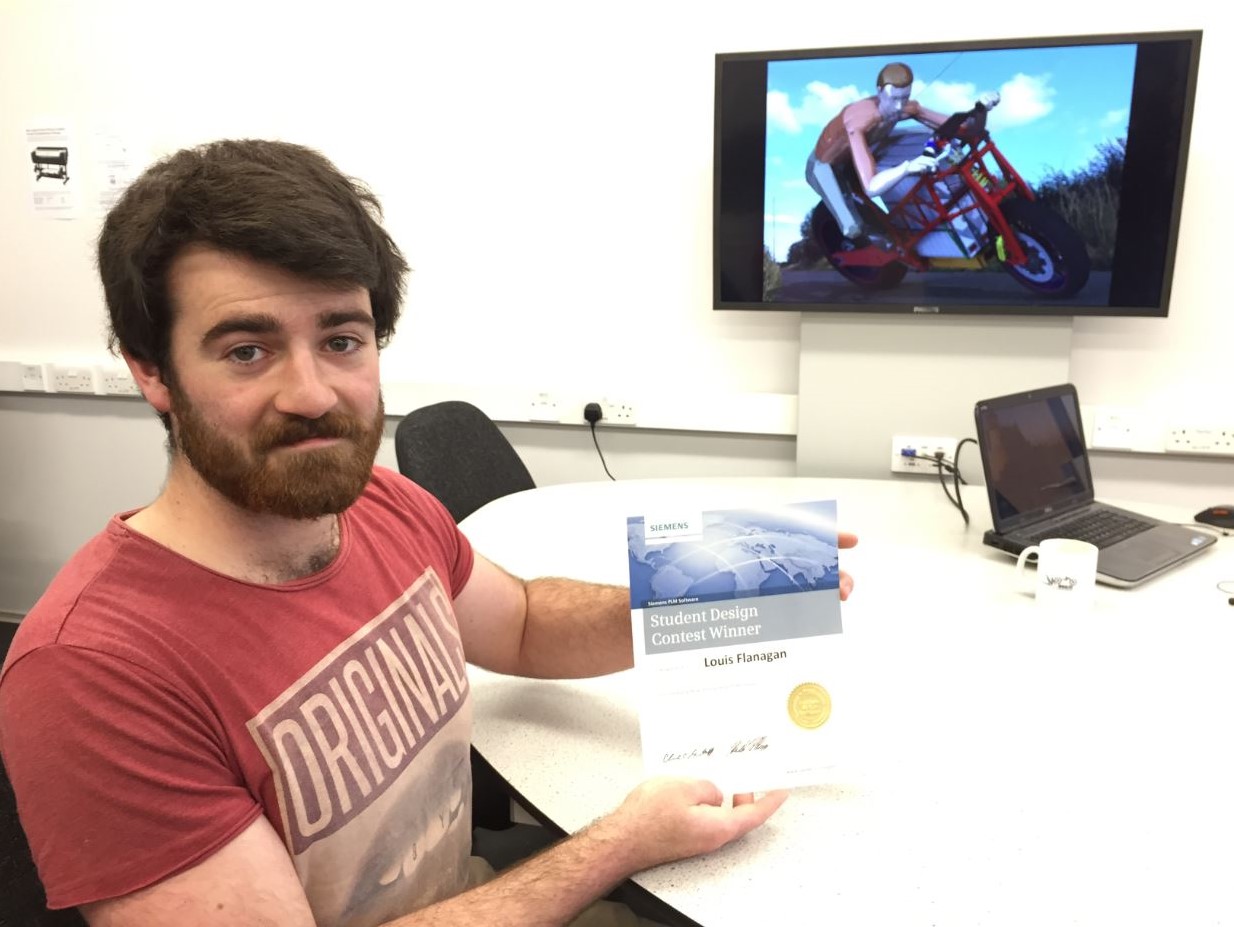 “This machine is designed from scratch by 5 Engineering students” says Louis Flanagan a student at the University of Bath. We will race the machine at next year’s TT Zero race (an electric only race at the Isle of Man TT). The bike features a custom chassis, 18Kwh Battery powering a 160Kw motor and our target is a 100mph average lap. This image depicts the initial design of the ‘core’ of the motorcycle and shows the stage that we are currently at. With under a year to go we are buying parts for prototyping. The team have used NX for the entire part and assembly modelling of the motorcycle and for the initial FEA simulations. NX was also used to generate the render that has been chosen as the winning image of the October Siemens PLM Software student design contest. Louis particularly like the integration of FEA with the CAD tools in NX “it is well integrated and operates in quite an intuitive manner, I especially liked the integration of the FEA into the main package as I have previously exported .stp files for separate meshing in a separate program and then separate solver.”

Louis tells us the idea behind this project…

“We are a team of 3 Mechanical engineers and 2 Integrated Mechanical and Electrical engineers, we are in our final (Masters) year of study. Over the summer we took a scouting exhibition to the Isle of Man during TT week to investigate the competition. We have recently had a number of other interested engineers from all years of study come and offer us assistance and become members of the team. We are also helping to set up a similar project for the next year down to continue for the following years.”

The team in the Isle of Man, checking out the TT Race

“The initial idea came from the pure excitement of the Isle of man TT, it is the oldest and most prestigious motorcycle race in the world and is a spectacle to watch let alone compete in! While on placement, I looked into racing at the TT and found the TT Zero class, a relatively new class purely for electric motorcycles. Looking into the class further I saw the opportunity for a small team of highly motivated engineers to flourish, in a way that is not possible in the more well established and manufacturer dominated classes, such as the internal combustion classes. The high paced development and constantly evolving technology also provides much scope for innovation and allows for some interesting concepts. Once the idea had taken hold I returned to the University of Bath and explained the project and its potential to a number of by course mates. They where understandably extremely enthusiastic about the idea and we started a racing team. Since then we have developed the first iteration of our motorcycle ‘core’ and are well on the way to completing the design of our race prototype for the 2016 TT.”

They have faced their fair share of trials and tribulations:

“There where many challenges in the design phase as with the extremely high power requirements, we are targeting a 100mph+ average lap (a first for a University team), there was extremely limited space with most of the motorcycle designed around the battery pack. In order to fit the battery pack and motor required into the motorcycle the adoption of a custom chassis and split swing arm was required. We are currently accruing parts for the initial prototype build (the motor and inverter are sitting proudly in our build room) and are in the process of negotiating some major component supply deals.”

We are looking forward to see how the team fares in the 2016 TT Zero Race, Good Luck Boys! Learn about our previous competition winners stories here, they all have an interesting and varied story to tell about their projects using either NX or Solid Edge:

This article first appeared on the Siemens Digital Industries Software blog at https://blogs.sw.siemens.com/academic/prestigious-motorcycle-race-sparks-design-ideas-for-university-of-bath-team/