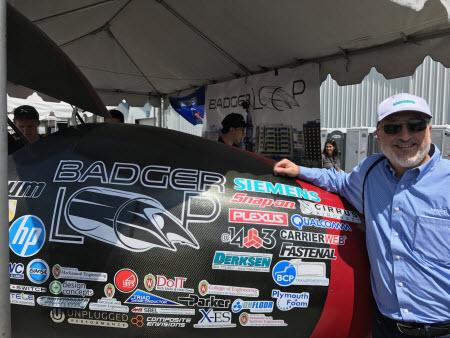 On a sunny Southern California morning, the air buzzed with excitement as dozens of teams from all over the world started erecting tents and unloading trunks of equipment. Final adjustments were made and the pods were ready for safety trials. The rumor was circulating that Elon Musk was going to be on campus all weekend and the competitors were all keeping an eye out for their hero! During the first phase of this competition, back in January of 2016, 115 teams presented concepts for their vision of a hyperloop pod and thirty advanced to the design/build phase. January 2017 saw the first actual “pods in tubes” competition at the SpaceX Hyperloop track where Delft University unsurprisingly won the highest overall score. Even then, though, there was a hint of the WARR team’s future success, as they won the Fastest Pod award back in January. The work these teams have done over the last three years has been incredibly advanced – serious space-age rocket science! Siemens is proud to have provided the software to do the technical heavy lifting for many of the teams throughout this competition – including the winning WARR team from TU Munich!

Saturday morning dawned hot hot! hot! hot! and the teams were all very nervous about the safety trials – with good reason. Of the two dozen teams on site, only three passed the safety trials and competed in the tube. Have no fear, though! Elon Musk announced on Sunday that SpaceX has decided to host the competition again next year!

When do you think we’ll get a chance to ride in a real city-to-city hyperloop? Are you excited for it?

This article first appeared on the Siemens Digital Industries Software blog at https://blogs.sw.siemens.com/academic/elon-musks-spacex-hyperloop-competition-speeds-up/