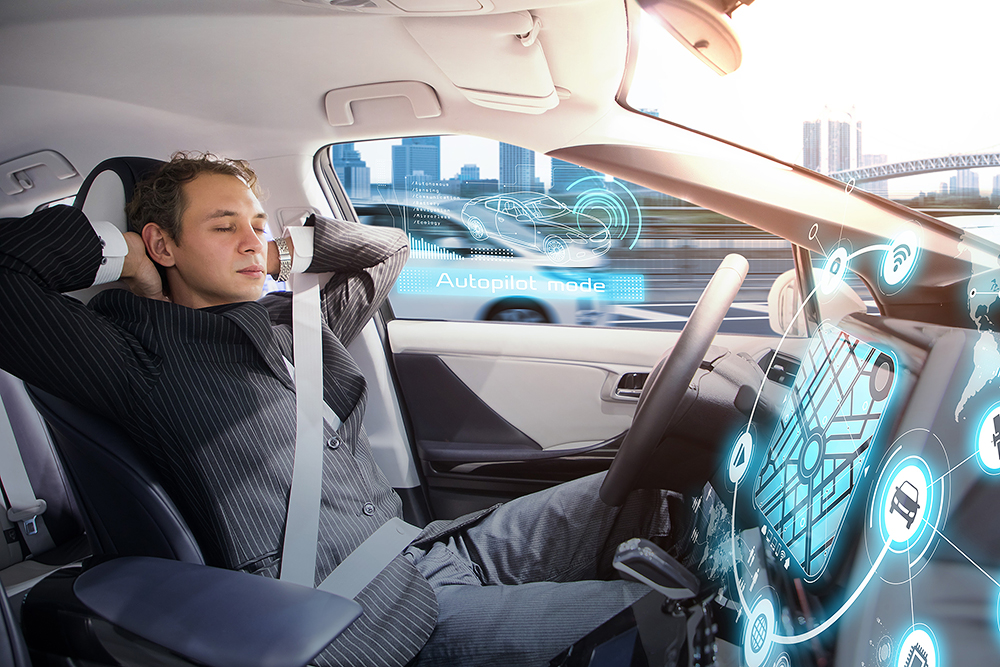 Humans and autonomous vehicles must be able to coexist and easily interact if future cars are going to be as safe, or ideally safer, than our streets today with human drivers. To accomplish this, the engineering of the human-machine interface is a key part of autonomous vehicle development.

A number of questions must be addressed. How do you keep passengers safe if they are conducting activities better suited for a living room or kitchen rather than a car? Will seat belts be enough? Will passengers even want to wear them? Will we need airbags throughout the interior that, during an accident, convert the inside of a vehicle into what may look like an inflatable house?

Also, how will we communicate with autonomous vehicles when commands get more complex as activities within vehicles become more varied and complicated? Will we be able to eventually simulate humans’ cognitive behavior to fully test the human-machine interface, or will the ability to test and develop interfaces with humans in the loop be enough to validate an interface design?

One company working to answer these questions is TASS International, which uses its expertise to develop safer and more intelligent vehicles. I recently spoke with three experts from TASS – Gwen Van Vugt, Frank Litjens and Paul Van Straten – about autonomous vehicle safety. In this part of the discussion, we move into development and testing of the interface needed to coexist with autonomous vehicles.

Edward Bernardon: The idea of human safety is important, but that depends on the human-machine interface. What are some of the challenges for getting autonomous cars to work more smoothly with humans so we can eventually trust them?

Gwen Van Vugt: There are so many questions and so many unknowns that are still being developed for system interfaces in autonomous vehicles.

For instance, how does one inform a driver of the status a vehicle is in? Or, how are you sure that when you hand back control to the driver, that they are aware of the traffic situation and capable of controlling the vehicle?

You either have a driver assistance system, where the driver is in control, and you assist the driver in making decisions; or, you go to the other side of the spectrum where you say the driver is entirely out of the loop and the vehicle is doing it.

When the vehicle gets into the situation where it’s not in control anymore – for example, it is snowing too hard – then the car pulls aside and puts itself in a safe state, and then tells the driver that it’s stopping here, but not by handing back control. The car is saying, “I’m stopping this vehicle, and from here, you may restart the vehicle, but you, the human driver are in control.”

Edward Bernardon: How do you think that autonomous vehicle simulation may help develop a solution? TASS simulates not only the car, tires and sensors but also human motion. It seems like TASS tools would be perfect for this.

Gwen Van Vugt: The only thing missing is that our software tools are not modeling the cognitive behaviors of the person. What we model is the physical behavior of the human body. We don’t have mental models where we model how people react to certain situations. I don’t know the status of mental modeling and how accurate it is, but, in principle, it would be possible if you have good mental models that you could add into in this equation. Ed Bernardon: TASS does vehicle-in-the-loop or driver-in-the-loop testing. Could that help engineers develop the interfaces of the future?

Gwen Van Vugt: TASS has a driver-in-the-loop system, where a real person drives in a virtual world, and those systems are often used to test the interaction between the human and the system. In this way, you can see the capability of an ADAS [Advanced Driver Assistance System] and how it has to change depending on the behavior or the state of the human in the car.

So, what you’re seeing more of is a driver-monitoring system with either a camera or other sensors that loop into the driver, so the car understands where the driver is looking and if he’s actively driving or half asleep, relaxed, tense, sweating or has a temperature.

This concludes part three of my interview with the experts from TASS International about autonomous cars. Part four delves into the challenges of autonomous vehicle testing.

This article first appeared on the Siemens Digital Industries Software blog at https://blogs.sw.siemens.com/thought-leadership/2018/09/24/simulating-your-way-to-a-friendlier-autonomous-car/