In a new technical paper, Ron Press, the director of technology enablement for the Tessent Test Solutions, describes the new TCA capability in Tessent TestKompress.

The world of ATPG just changed with the introduction of a new way to create and choose the most effective test patterns. Choosing the types of patterns to apply and setting coverage targets has always been a challenge, and it becoming more daunting with the addition of new types of patterns. The Tessent team, in close partnerships with industry leaders, developed an automated solution to measuring pattern value that provides a consistent, “apples to apples” assessment of patterns detecting defects based on the likelihood the physical defects occurring.

The approach uses the total critical area (TCA) associated with faults detected by a pattern. In other words, we first determine the likelihood of defects occurring based on their critical area, then we can sort the various pattern sets considering the defects they detect to choose the most effective patterns to apply.

TCA provides a common metric to assess a pattern’s impact on DPM, which can be used to sort or order patterns to achieve the lowest DPM. As a result, you can mix in patterns targeting new fault models for a more effective pattern set, even with the same number of patterns as your original pattern set. You can select or sort the most effective patterns from your entire pattern set based on their ability to detect physical defects.

Why is TCA a game-changer for test? Because test coverage targets for static and dynamic patterns targeting stuck-at and transition fault models, respectively, are usually based on the percent of faults detected. These targets vary by company and it often takes years of production fail data to decide on appropriate goals. When a company needs to add a new fault model, the target could be completely different than test coverage based on the full fault list. For example, consider targeting a test coverage for all potential bridge faults—this could be a huge list. You might achieve 99% detection of all bridge faults but miss hundreds of the most likely bridges. To reduce DPM, it is more effective to choose the subset of bridges that is most likely to occur.

The challenge of selecting patterns for production test is complicated by the inconsistent targets for various fault models. Patterns targeting stuck-at and transition faults traditionally target the number of faults detected. Bridge faults could be weighted based on parasitic capacitance, to create a smaller list than simply all potential bridges, but it would not be consistent with targets for other fault models. TCA provides a common metric for grading a pattern’s ability to detect defects.

What is critical area (CA)? CA refers to the area in a design layout that determines the likelihood that a specific physical defect can cause a failure in the design. TCA is the sum of all individual critical areas of a short between two connectors, or an open in a connection, weighted by the probability of occurrence of that spot size. Instead of just counting faults, TCA coverage takes the likelihood of defects into account and provides a consistent metric for all fault models. 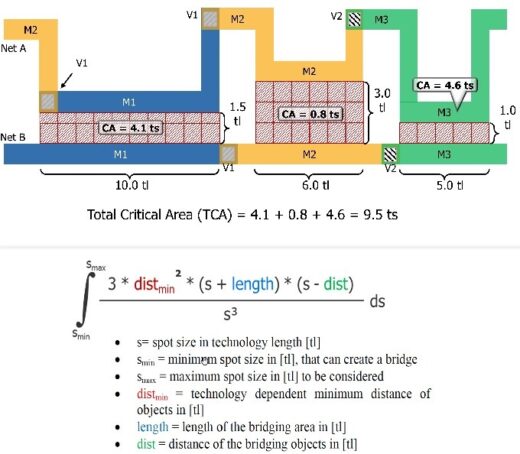 Features of using TCA include:

DFT and the competitive edge September 1, 2021 Smart DFT for quality and TTM Don’t let your plans for successful new SoCs be derailed by a lack of…
Efficient and effective DFT for 3D stacked die August 22, 2022 Yes, there is a path to a scalable, affordable, and comprehensive DFT solution for 3D ICs.
Improve defect detection for competitive, high-quality SoCs April 6, 2021 To deliver the highest quality SoCs, these manufacturing test strategies ensure defects are detected before it’s too late. It is…

This article first appeared on the Siemens Digital Industries Software blog at https://blogs.sw.siemens.com/tessent/2020/08/13/using-critical-area-to-optimize-test-patterns/