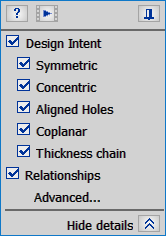 This question recently showed up in the forums, and without hijacking the thread, I thought the best way to respond to it was here. I’m guessing that it was intended as rhetorical snark, but in this case I’ll take the bait and answer it. It’s actually a legitimate question that we see sometimes in various forms.

It turns out that unintended change is one of the biggest fears of people who are curious about Synchronous Technology. If you remember back to when you were learning CAD, and history-based CAD in particular, I’ll bet you had the same fear then. Any time some automated system starts making decisions for you, it’s natural to feel like you’re losing control.

In history-based software, you learn to lock everything down because the model is constantly recalculating, and anything could move at a given time. Most of us became comfortable with that way of thinking. But why should we have to work so feverishly to prevent bad things from happening?

Synchronous works just the opposite. In Synchronous, the default is “I’m not gonna move unless you grab me and pull me or put a dimension on me and change it.” That’s what a model face would say if model faces could talk.

But then there are so many natural assumptions, like if you move a hole, and another hole is concentric with the first hole, what happens? Or what happens to coplanar faces? Well, this is all part of design intent, and so the people who developed Solid Edge figured out the basic instincts of what a CAD system needs to do, and these are the default Design Intent (Live Rules) settings. Design Intent doesn’t add relations to the model. I think a lot of people misunderstand this. Design Intent adds faces to the selection set. You see, in Synchronous, the only things that will change are the things you have selected. And the things Design Intent selects for you. But you can turn Design Intent off. See that little check mark right next to Design Intent? You can turn it off – turn it ALL off – with the flick of that switch. Or you can turn off just little bits and pieces of it, like deselect all the coplanar faces, or all the symmetric faces.

So in a way, it’s true. If you select a hole to move it, another hole or another cylindrical feature that is concentric with the first hole is also gonna move – so stuff is moving that you didn’t specifically tell to move. Most people who use it look at this as an advantage, because you don’t have to sit there and do a geometrical analysis of your part everytime you want to change a dimension or move a face.

But, if that kind of thing freaks you out, just turn off Design Intent, and just be explicit about selecting everything you want to change, with no assumptions based on the existing geometry of the part, and that’s the end of it.

When I demonstrate how to use Synchronous tools, I think back to the demonstration I saw that really made a lot of sense to me, where the light really turned on. That demo was done by Ilya Nazarenko at a regional summit near Boston several years back.

His demos reduce changes to the simplest elements and then builds to more complex ideas. These videos are a couple of years old (ST5), so the Design Intent window is not there, and it was called “Live Rules” at that point.

His demo starts with dimensions. I think that’s where a new Synchronous user needs to start learning. I also like that his demonstration shows a lot of “failure” meaning, he shows what happens when you don’t get what you want. I think that’s a real key to learning. Training where everything goes right is not realistic.

At about the 7 minute mark in the first demo, he turns off all the rules, and slowly turns them back on, demonstrating what each does.

If you have a question like “Where is the ‘never add any relation without my permission’ button”, you need to spend some time studying these videos.

This article first appeared on the Siemens Digital Industries Software blog at https://blogs.sw.siemens.com/solidedge/where-is-the-never-add-any-relation-without-my-permission-button/