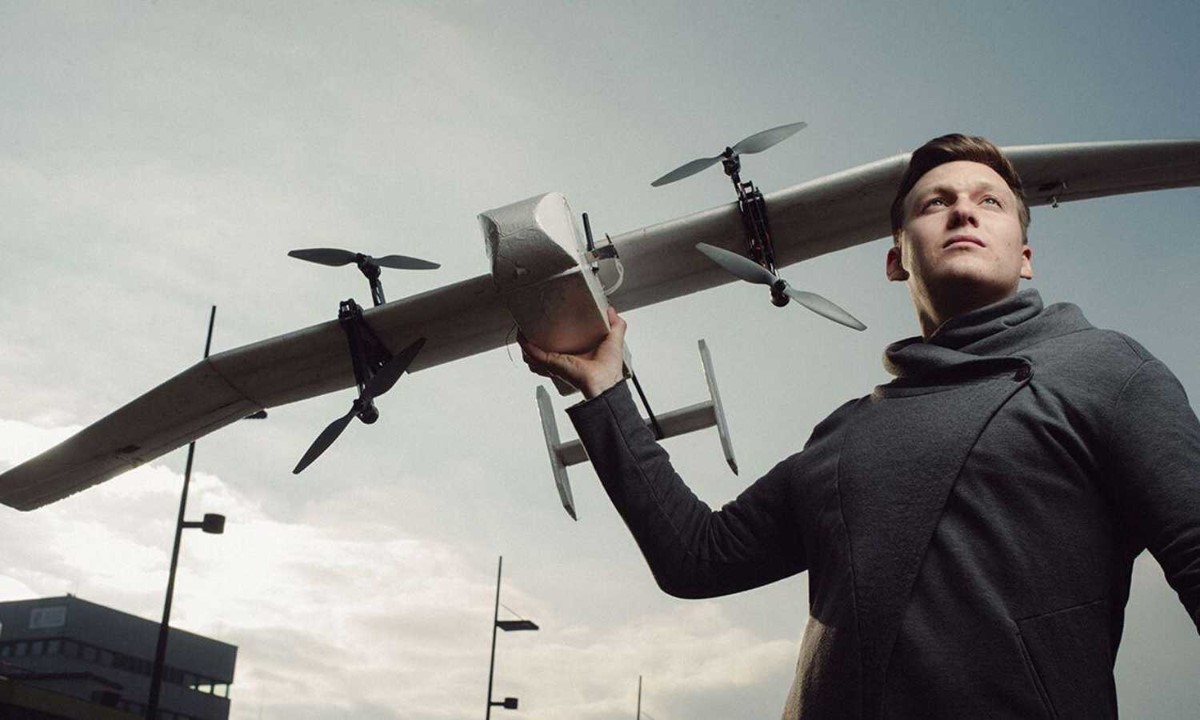 Tom Plümmer is the co-founder of Wingcopter, an aviation startup from Darmstadt that has dedicated itself to the subject of drones. Tom’s background is actually in the media sector, but via detours and an earlier startup he came across his current co-founder Jonathan, who heads the entire development department at Wingcopter. Together they have one goal: to use their technology to make the world good. This interview was recorded back May 2020, as part of the podcast series Startup Hacks from Bernhard Kalhammer.

Bernhard Kalhammer: Welcome to a new episode of Startup Hacks, today with a super exciting interview guest, Tom Plümmer from Wingcopter. He will explain to us what Wingcopter is and who Tom Plümmer is.

Tom Plümmer: Thank you for the invitation. I’m Tom, one of the founders of Wingcopter. To describe myself, I would say I’m not really an engineer. We have good people, who have taken over the whole engineering part, including my co-founder who works in this field. My background is in media – I studied Media Management with a focus on communication design and product design and filming.

I would say my time in Africa has probably shaped me the most.  I spent almost two years working with kids for an NGO in Ghana, which was very cool. During my studies, I went abroad again for one semester with the German Academic Exchange Service. Through the DAAD I was able to study for a year at the University of Accra, where I focused on film. I met many people there and had a very intense and good time. I love the continent, the positive energy of the people, the willingness to participate with great ideas.

Of course, the problems I experienced in Africa also shaped me. For example, if a health care system is not well built, supply and cooling chains are quite bad for medical goods. Those two factors resulted in chaos. I took my knowledge with me to Germany. Through my studies, I worked with technology. Unfortunately, I have never really developed any kind of technology or invented things myself.

Two things led the way to what we are doing today: Wingcopter. Starting in Africa and other countries, seeing a lot of development potential, especially in the areas of supply chain and healthcare. I needed drone technology to take aerial photos.

I started focusing more on drones and founded a small startup that offered drone services, while I was still in school. I worked with two partners who knew how to fly drones. My responsibilities included recording from the drones.

Filming can have a positive impact, but I wanted to use the drone technology for more than just filming, but it was underdeveloped at the time. The drones were not able to fly for a long time or far distance, but the visionary in me dreamed about using them for logistics. Having dinner with co-workers, we discussed the possibility of building new drones. This was not in any of our capabilities, the missing element was engineering abilities.

A co-worker recommended a smart talented engineer in Darmstadt, name of Jonathan Hesselbarth . He had built drones himself,  and has an engineering background, so thought maybe this would be an excellent contact.

I met Jonathan in 2015, and by that time Jonathan had been developing drones for five years. Jonathan studied engineering with a focus on aeronautics, lightweight construction and aerodynamics, and he was able to do exactly what I absolutely couldn’t. He wanted to create something big and been building prototypes since 2010. Basically, they were already the Wingcopter.

Bernhard Kalhammer: Crazy. What a stay in Africa. From the NGO to your first startup, which was already underway in the field of drones. You have to tell us what drones you used. And how you ended up with Wingcopter.

Tom Plümmer: The special thing about Wingcopter is the swivel rotor mechanism, which Jonathan invented to combine two drone types.

You have a multicopter that can take off and float in the smallest space, which simply flies upwards and does not need a runway. It creates the problem that you must generate buoyancy like a helicopter continuously to keep it in the air. Accordingly, the battery is empty quickly, which is the frustration that always comes with the drones.

Now people know more about this technology, because drones are gaining more and more popularity. At that time, it was so impressive. The drone takes off vertically, moves a little bit forward, and then out of the forest, out of a hole in the trees. It swings its rotors, and the thing shoots across the field and goes up in the air in big rounds, it flies like an airplane.

Drones always look more spider-like. What’s special is that our Wingcopter has a wing on the rotors that can swing 90 degrees. There are four rotors on the drone, the rear ones are going up, the other ones are going down. This technique gives very good stability during wind and makes the whole system extremely controlled. That means you have the same speed, flight time and range like a plane. There are also drones that are started with a catapult and captured again with nets.

All this is not necessary here, because the Wingcopter brakes in the air. It can fold the rotors back and just land and take off vertically. What’s special is that we have a platform that is simply efficient, that starts in the smallest of spaces, that can fly long and far and can carry a lot very quickly. The platform can be equipped with all possible sensors, for example with a delivery box.

We have a delivery box that can be dropped on a rope. After that the drone turns around and flies back to the landing point. The drone doesn’t even need to land in order to deliver.

A two-way delivery would be very valuable, if you deliver medicine and transport laboratory samples back. We also have multispectral cameras, which are good for agricultural smart farming, so you can create great mappings and measurements. We have installed lasers for laser scanners, as well as cameras with zoom and infrared. A huge range of solutions that are possible, thanks to Wingcopter. This allows us to serve a whole range of industries and customers, up to a maximum of 6 kilos. With the next version, it might be a lot more, so you will be able to put all kinds of stuff on it.

You would suddenly have a platform for 20 different solutions on 20 different markets. You can calculate what this would mean for the future of Wingcopter, it is important that we don’t lose focus.

Bernhard Kalhammer: I was just about to say that. Testing is always a good way to get a sense of what you’re focusing on. But you are absolutely right, if it is so multifunctional, it is difficult to keep an overview and not lose focus.

Tom Plümmer: Overall, we tested a lot. We tried a lot of different things, with many different customers on different markets, and then we figured out what worked the best. We are already part of this market and are already flying tests in several countries. In those countries, we also have permission to fly long distances. Those are delivery drones that deliver parcels.

We decided we were getting into logistics, and that was mainly my dream. I described earlier that it is my desire to improve the supply chains in developing countries and build health systems. With drones, we can skip the expansion of the highways, which would take a long time and would costs a lot. I see the possibilities.

We decided to focus on making deliveries by drone and perfect that. We have already gained experience in this area and delivered vaccines for children for UNICEF. With one flight we delivered 50 pieces, so a very large load.

Bernhard Kalhammer: You guys use a Siemens software, right? Solid Edge has also played an important part in prototype development in general, how did you use the Solid Edge software?

Tom Plümmer:We are very happy with the product. It’s our basic tool for development and adjustments. We can make optimizations, designs and adjustments according to customer requirements. All our engineers use Solid Edge.

I can’t say anything bad about it, it really helped us. How to start a startup is a good question. You must have certain licenses for programs, you have better conditions as a student, when you have a company, you have to pay for them. There are great programs out there. We’ve been sponsored for a while and the critical part is to create the final transformation. But we are well positioned in engineering now.

Bernhard Kalhammer: Like you said, Solid Edge has a start-up funding program.

In the beginning the cash is low and the motivation is high. We all want to start our own thing. If you are working with hardware like you, the investment is a completely different story. If you can save the costs for a great software for the first year, which contributes a significant part for the development of the product, that is amazing.

Tom Plümmer: Yeah, I put it a little fuzzy. Without this good offer for startup companies, it’s really hard to make the jump from student to company. If help is offered, please take it, that’s what helped us. Unfortunately, I cannot recall all the details of how long the grace period was. We had the chance to try the software and to decide that we wanted to work with this tool. Meanwhile, it helped us through the production and marketing process. I think that it could help many more startups.

Bernhard Kalhammer: Hey, it was a really cool interview. Thank you so much for your time. I truly enjoyed it. I wish you all the best for the future.

If you want to hear the complete episode in German, recorded on June 6th, 2020, visit https://startuphacks.de/startup-hacks-podcast-100-120km-reichweite-bis-zu-6kg-nutzlast-und-eine-partnerschaft-mit-ups-tom-pluemmer-von-wingcopter/

To apply for the Solid Edge Startup Program click here.

Startup Spotlight: Speedbird's new drone design takes… August 2, 2021 It’s a bird. It’s a plane. No, it’s a drone—possibly one of Speedbird Aero’s drones en route to deliver pizza or medicine.…
Solid Edge Startup Spotlight: Flying through virtual worlds… March 10, 2021 During his time at the MIT Media Lab, Patrik Künzler came up with the idea of developing a chair that…
Solid Edge Startup Spotlight: The energy storage system of… March 12, 2021 Martin Schichtel, co-founder of Kraftblock, has a mission: develop a storage-based, sustainable energy system. With this, Kraftblock wants to establish…

This article first appeared on the Siemens Digital Industries Software blog at https://blogs.sw.siemens.com/solidedge/solid-edge-startup-spotlight-120km-range-up-to-6kg-payload-and-a-partnership-with-ups-tom-plummer-from-wingcopter/