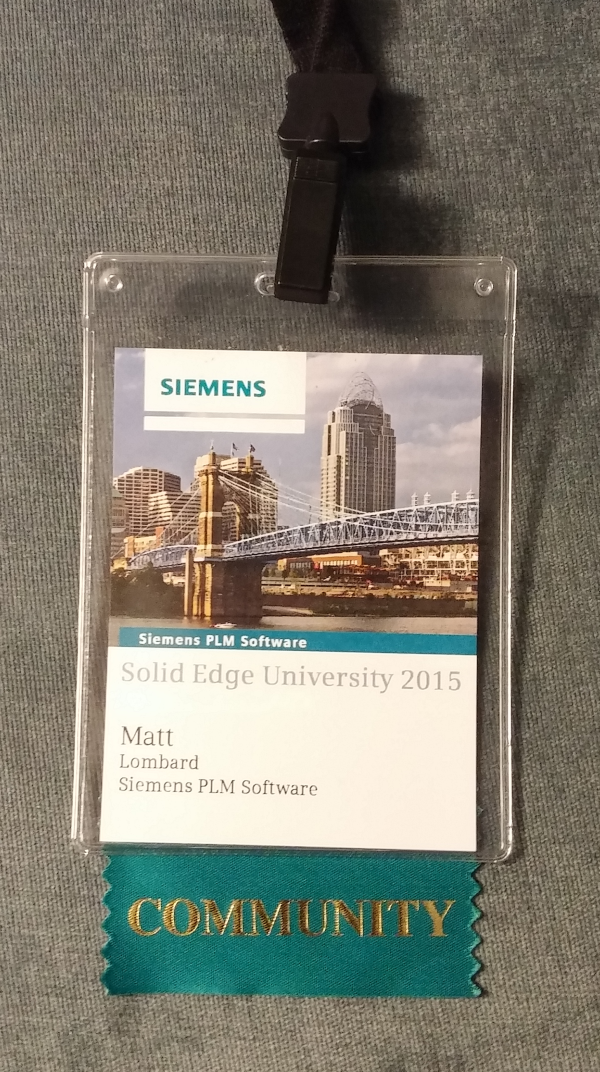 Wow, what a day. I started out at 8 AM by giving a presentation to an engaged audience on

Synchronous Technology. There were several Sync sessions in the same room, including one

from Craig Ruchti, and one from Melissa Schultz. Melissa’s presentation had maybe the best quote I’ve seen from a user using Synchronous. She took a big project through the process using Synchronous instead of Ordered Solid Edge. At the end of the project, one of the new Sync users had this to say:

Wow, so they actually wound up with a better product because they were able to get more done. Her study showed that the more complex the assembly, the more time was saved with Synchronous. Projects ranged from 7x to 2x faster in Synch.

Remember that we publish the presentations from SEU in the Knowledge Base area of the community. I’ll put out a notice when this year’s presentations go up. This afternoon I attended Richard Funnell’s presentations on Keyshot. I didn’t get to spend enough time in the What’s New for KS6, because I was running around getting community people lined up to receive prizes. Mr. Funnell is one of those guys who really knows his stuff, and can apply it to just about any situation. He does demos and training, He’s comfortable with the crazy high end rendering of professional computer graphics guys as well as the more utilitarian stuff that we engineers create.

In addition to the free product inside Solid Edge, Keyshot also offers a Pro (paid) version that has more advanced tools. I was really hoping to see the What’s New in KS6, but I’ll have to catch up with Funnell separately. And then of course was the Wrap Up session. I have to say that John Miller has earned his stripes. He was walking around, talking to users, and I saw him in some of the technical sessions. This was his first SEU, and some users may not have even been aware that there was a new guy at the helm. sneak peek of ST9. Unfortunately by the time the end of the day rolled around, my camera was dead, so I’m relying on Twitter for these images. Simon Floyd took the one below. Jeff showed the whole list of stuff in progress in ST9, with about 75% of it blacked out with marker. His dry sense of humor showing through. He was, however, able to talk about several areas, and these are all meat-and-potatoes CAD functions, or stuff directly related to day-to-day file management. Customization portability, Pack and Go, Rev Man 2, blocks in sketch, multibody enhancements, and more of course. The message was that while other CAD companies are boasting about changing their icons, Solid Edge continues to develop stuff that customers are asking for and want/need.

John Miller and I presented awards for the Design Better Challenge. First prize went to Craig Hall, who got some very nice 3D Connexion devices, I think a mouse, a spaceball, and a keyboard. And then they had Community awards. Again, I borrow an image, this time from the SEU15 Android app, and Russell Brook. The awards were given out in no particular order to Ken Grundey, Matt Johnson, Tushar Suradkar, Sean Cresswell, Bruce Shand, Imre Szucs, Bob Mileti, Jason Newell, and Craig Hall again. Overall, this was a very successful University, especially for the Community. We made a lot of noise, we had our own special badge banner, and we were always together having a good time. I’m grateful to Solid Edge for bringing over Tushar and Sean from half way around the world, trips that they might not have made on their own. They really added a lot to everything.

There was so much more news that will come out over time that came from SEU15, and one blog post would be too crammed with stuff to cover it all. I’ll be doing interviews with some of the presenters from SEU breakout sessions and have them go through the highlights, and I will also have to go through some of the announcements like Catchbook in more detail.

So until next year, thanks to Solid Edge for the great event, and thanks to all of you for supporting great CAD software!

This article first appeared on the Siemens Digital Industries Software blog at https://blogs.sw.siemens.com/solidedge/seu15-wrap-up/