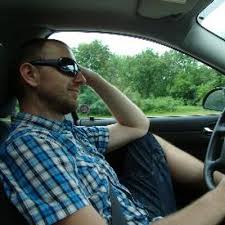 Imre Szucs is known by many names around the Solid Edge universe, but everyone knows him as an inexhaustable fountain of ideas and knowledge. I’ve met him at a couple of Solid Edge Universities, and he’s as animated in person as he is in the forum.

His native language is Hungarian, but he manages English remarkably well. If you follow him on-line you’ll see him not just here in the Solid Edge Community, but he also has a blog, and you’ll see him in social media, and pretty much anywhere there’s a discussion about Solid Edge where someone needs an answer, Imi shows up. He’s been responsible for countless answers from users around the world.

As a Solid Edge reseller Application Engineer, his generosity with his time and knowledge are boundless. Here in this interview, you can get a little insight into what makes a guy like this tick.

How did you get started with mechanical engineering and Solid Edge?

I’ve never wanted to be a lawyer or a doctor.

Okay, seriously, I think to be a mechanical engineer is really exciting. An engineer meets a lot of challenges every day and has to solve them. “Not a boring job” as I say. All engineers are artists a little bit. I was supported by my family, they always said to me: “Imi, you must be engineer!” – because of my technical sense.

I have a short story how I met Solid Edge at the University. The first 3D CAD software I studied was Pro/E 2000. At that time I met a beautiful girl (who is my bride today) who was studying Solid Edge V8. Once she asked me: “Why Pro/E?” My answer was simple: “This is the best software (this is the Pro/E ego).” She asked me: “Really? Don’t you know Solid Edge? It’s an easy to use 3D CAD software.” I said: “Thanks, Pro/E is more than enough for me.” She said: “Okay, let’s challenge. I’d like to design a bar chair. I’ll use Solid Edge and you Pro/E.” She was done twice as fast as me and that made me get interested in that software, which I hadn’t known before.

This all happened in 2000. That year was a milestone in my life because I got a nice girl and a great software. So now I’ve been using Solid Edge for 14 years. How did you come to work for a reseller?

During University years I was working as gambling machine designer at a company. I really enjoyed this job. This company was using Autocad but it wasn’t productive enough so I suggested implementing a Solid Edge seat instead of “digital drawing board”. The boss was spellbound by the capabilities of Solid Edge and we bought a seat from the Hungarian Solid Edge reseller. The salesman was a cool guy and it seemed he loved his job. This happened in the end of 2002.

There was an other guy in that team (an Application Engineer), who knew Solid Edge well. When I asked a technical question from them he always gave me the correct answer. I sent many comments and enhancement requests about Solid Edge. Once the sales guy asked me: “Imi would you like to join us? We need a new Application Engineer because of increasing customer numbers.” At that time this was one of my dreams and I accepted the invitation in 2007. This was a win to win situation for us. Since then I’ve been working for Solid Edge’s and users’ success.

What is it that motivates you to do all the things for Solid Edge users that aren’t your customers?

I’m glad to help Solid Edge users. This is a natural thing for me, I don’t expect thanks from Edgers. It’s nice to see that Solid Edge users do fantastic products and if they bump into a wall I can help to solve their issues. Sometimes I have no free time to read the community site, but I can see that Ken, Sean and other guys give nice answers for questions. My job is my hobby, so I’m lucky, but it’s not easy. I have to teach and support customers, make presentations, look for new partners as Quadrispace, write new articles on web and social media, etc… You can see I’m not bored on weekdays.

One of the big requirements for all Solid Edge materials is localization (translation). How would it affect adoption of Solid Edge in Hungary if materials such as Help and training were not available in your language?

It would be absolutely negative, because Hungarian customers aren’t really good at English and they prefer to use localized version of Solid Edge. When I do a demo at a prospect, the second question is the following: “Does Solid Edge have Hungarian UI and Help?” You can see customers are “sensitive” for localization in Hungary. Localizing a software is a hard job, you have to know the software deep otherwise the localized version won’t be professional… I think we are in a good position against competitors…

Can you identify some things that you are doing that you think other Solid Edge resellers could also do that would help the community of Solid Edge users as a whole?

It depends on countries, but I think that the most important thing is the business, however there are two others. First is Marketing, this is one of the key of success. “Good wine needs no bush” is not true nowadays. More technical marketing than ‘washing powder’ marketing. This is the sign of success in my country.

Second is Education. If students study Solid Edge in school/university years, they probably will use it in their work. I’d like to give an example. Some years ago we organized the first Hungarian Solid Edge Competition for secondary school students. I remember, only 14 students had entered for competition. In 2014, more than 40 students entered for competition. We invited 26 of them for the Final from 3 countries (Hungary, Slovakia, Serbia) and they had done great jobs. I see the (r)evolution. What benefits do you personally get from the Solid Edge Community site?

First of all I have made many friends in the Solid Edge community. Second, I always get a lot of info that I can use in my job. I think engineers should always learn. This Henry Ford quote is on my blog: “Anyone who stops learning is old, whether at twenty or eighty. Anyone who keeps learning stays young.” I believe in this. By the way I’ve already got lot of kudos…

I like to read Solid Edge Blog on the community site, because it ‘walks through’ interesting themes.

What are your favorite new features/functions in the new release of ST7?

Hungarian Solid Edge users commend ST7 and Dan’s team can be proud of it. I’m in a special situation, because I know other 3D softwares and regularly test them. If I meet a feature what can be useful in SE, I log it as an ER (many of them have been implemented in Solid Edge).

You have been to Solid Edge University how many times now? What do you like best about making that long trip?

You are right these were long trips, but have to say they are worth it. I’ve been to Solid Edge University twice, the first was in Cincinnati last year and the second was in Atlanta this year. My wife also participated in Cincinnati and after the three days of the University we took a nice journey to Niagara Falls and New York. We really enjoyed this 2 weeks. It’s hard to speak about SE University because everybody should feel its atmosphere. This is similar to a big family, yes, we can say ‘Solid Edge family’. I hope I could participate in 2015 too and hope it will be the largest I’ve ever been to.

Have you applied for Karsten Newbury’s old job? ;o)

Ohhh, nice joke. There is only One from Karsten, he has done great job at Solid Edge. I’m a technical guy with a ‘marketing vein’…

Thanks Matt for your questions, special thanks to Laura and Field Support guys for helping and Hungarian Solid Edge users for giving feedbacks.

This article first appeared on the Siemens Digital Industries Software blog at https://blogs.sw.siemens.com/solidedge/interview-with-hungarian-reseller-imre-szucs/