The power dissipated in a IC comprises two parts, a dynamic part (due to all the turning off and on of the transistors including frequency and capacitive affects) and a static, or leakage, part (that is the power that is drawn when the transistors are in an off state). The static proportion increases with smaller transistor sizes AND is temperature dependent. Temperature first affects functional performance then, as runaway thermal feedback is encountered, it quickly escalates to a full smoking thermal catastrophe. All of which is shown in this (albeit a bit old) video: 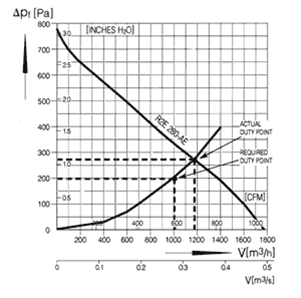 The key to determining the point at which runaway might occur is consideration of both the static power vs. temperature relationship AND the system performance in same terms, determining where they meet, and this is what the patent focusses on. This bears a striking and quite lovely similarity to fan sizing, where the fan P Q curve intersects with the system P Q behaviour is the operating point of the fan, and thus also of the system.

Be it fan sizing or specification of a temperature dependent power dissipation, FloTHERM can simulate it all. Quickly, early and easily.

This white paper on our chip-package solutions will hopefully provide some additional insights.

Thermal Influence on Maximum Current Carrying Capacity January 20, 2021 Superconductors aside, anything that conducts electricity will dissipate heat. The more current that flows, the more heat is dissipated, the…
Demystifying Electromagnetics, Part 9 - Skin Effect October 13, 2021 A conductor carrying an AC current will tend to have the current bunched up at its periphery. Why and why…
Demystifying Electromagnetics, Part 5 - Ferromagnetic Cores June 14, 2021 A coil of wire creates a magnetic field when a current passes through it. The magnetic field is strongest in…

This article first appeared on the Siemens Digital Industries Software blog at https://blogs.sw.siemens.com/simulating-the-real-world/2014/09/19/xilinx-patent-for-critical-tj-prediction/