FloVENT, FloTHERM’s sister product aimed at 3D CFD simulation of the built environment, has for many years been able to simulate the thermal behaviour of a data center. After all a data center is a built environment, albeit more for servers and the like than humans. We’ve not changed this capability of FloVENT but we have copied the relevant data centric features over to FloTHERM, extending the positioning to cover electronics thermal management from the chip to the room. 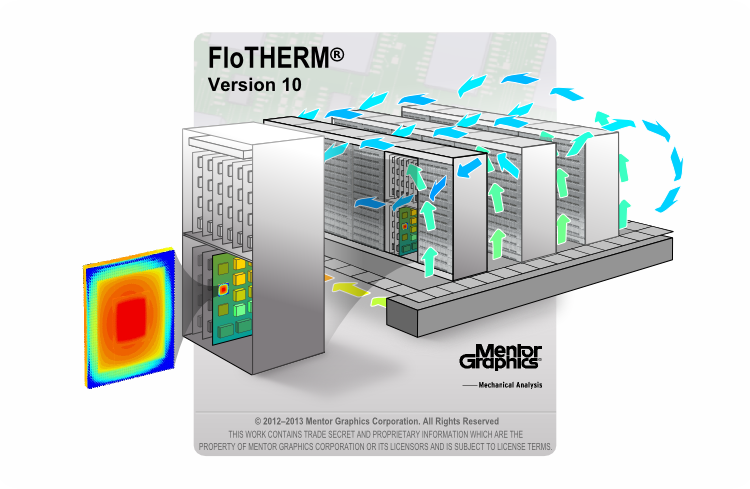 The electronics thermal supply chain is linked together with the desire on one side, and the obligation on the other, of assuring thermal compliance in the customer’s application. Thermal performance of the equipment in the data center is a function of density, layout, cooling architecture and operation. Now I don’t know exactly what % of all PCBs designed and manufactured end up in a data center, likely not that many. However I assume that nearly all of the bytes communicated in this IoT age are routed through such rooms.

Pushing bytes around the net needs energy. Bytes don’t have much kinetic energy themselves, which is why that energy ends up being dissipated as heat. Leave that heat lying around unattended and things will get too hot and stop working. Ever wondered what a world full of teenagers lamenting the loss of Facebook, Twitter and SnapChat might sound like? Ouch.

FloTHERM’s Rack and Cooler SmartParts allow for the quick and easy definition of these common data center items. That coupled, with FloTHERM’s renowned ease of use and rapid simulation performance, enables the thermal performance of a given data center configuration to be rapidly determined. Check out this video for a look at the typical output from such a simulation.

Thermal Influence on Maximum Current Carrying Capacity January 20, 2021 Superconductors aside, anything that conducts electricity will dissipate heat. The more current that flows, the more heat is dissipated, the…
Flow Visualization and the Beauty of the Vortex Dome January 14, 2021 Fluids tend to be transparent, which is problematic for flow visualization. Rheoscopic fluids get round this by seeding the flow…
Demystifying Electromagnetics, Part 5 - Ferromagnetic Cores June 14, 2021 A coil of wire creates a magnetic field when a current passes through it. The magnetic field is strongest in…

This article first appeared on the Siemens Digital Industries Software blog at https://blogs.sw.siemens.com/simulating-the-real-world/2014/09/04/top-10-flotherm-v10-features-9-data-center-simulation/