Arguably the most important (and often least well characterised) parameter controlling the temperature of electronic products is their power dissipation. Usually dissipated on the active layer of a die, this heat power seeps through the die, package, PCB, air, chassis all the way to the ambient in which the product sits. The less heat power the better, the lower the temperature rises that occur. The last thing the cooling requirements need is even more power being added to the product but that’s exactly what happens on any sun apparent face. Sun bathing was fashionable in the 70s, it never was for electronics**.

Our own star provides us with a maximum of about 1400 W/m2 of incident solar energy, most of the power coming in the visible spectrum range. This can have a marked effect on the resulting surface temperature of an outdoor pole mounted repeater or base station cabinet. Accurate accommodation of such a power input to a FloTHERM electronics cooling simulation model is often critical. 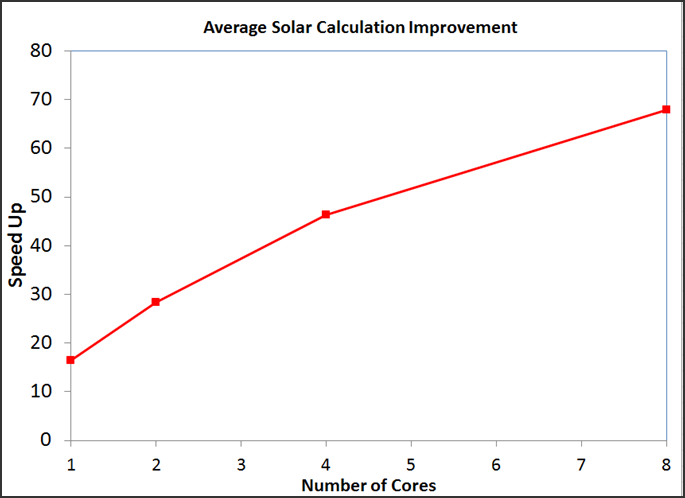 FloTHERM’s had the ability to specify the solar effects for a number of releases. The (annual) date and time of the simulation is specified together with the location and compass orientation of the model, FloTHERM does the rest, works out the sun apparent solid faces, the incident angles and imposes the correct resultant power on those faces.

This ‘pre-processing’ calculation used to take some time, days in some cases. It doesn’t any more. Speed improvements comparing V10 to V9 of up to x80 faster are now achieved though a rewrite and added parallel support for multiple processors. Yet another example of our strategy to reinforce the core functions in our software.

**Photovoltaics aside of course

Thermal Influence on Maximum Current Carrying Capacity January 20, 2021 Superconductors aside, anything that conducts electricity will dissipate heat. The more current that flows, the more heat is dissipated, the…
Demystifying Electromagnetics, Part 8 - Losses September 8, 2021
Demystifying Electromagnetics, Part 1 - Fields and Analogies March 2, 2021 This blog series will strive to demystify (low frequency) EM by way of pictures and analogies, with as few equations…

This article first appeared on the Siemens Digital Industries Software blog at https://blogs.sw.siemens.com/simulating-the-real-world/2014/09/04/top-10-flotherm-v10-features-10-improved-solar-calculator/