As with all good inventions, you quickly wonder how on earth you could have done without them before. Relieving thermal bottlenecks reduce temperatures; it’s so blindingly obvious. Now that we have the ability to visualise with FloTHERM exactly where the thermal bottlenecks are in a design, the job of the (overworked/underpaid) thermal design engineer just got that more productive.

Electronic parts are often reduced down to single characteristic metrics to quantify their behaviour and performance. From a thermal perspective parts are often described in terms of DegC/W; a temperature rise for a given power dissipation. This single value covers the entire part, giving no indication as to what it is about the part that results in such a single number, nor was it defined to. The bottleneck number field calculated by FloTHERM, formulated as the dot product of heat flux and temperature gradient vectors at all points, goes further to indicate where exactly are the main contributors to this overall thermal resistance. An insight into the physics of the behaviour of the part that can be capitalised on by said thermal design engineer. 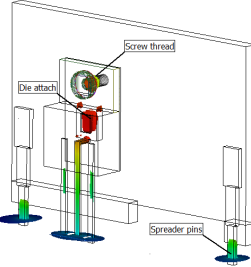 Let’s go back to the distribution of the high thermal bottlenecks when the TIM between the TO and heat spreader had failed. What might have been done to the design so as to mitigate the thermal effects of the TIM failing? Knowing that thermal bottlenecks occur where the spreader pins neck down, let’s see what happens if we reduce that bottleneck by increasing the cross sectional area of those pins, literally analogous to widening the width of the neck of the bottle. 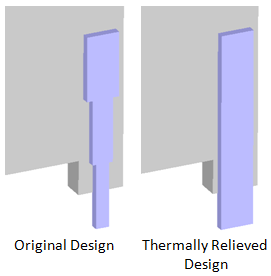 About an extra 0.1g of metal was employed in the widening of the spreader pins. And sure, for now we’ll ignore the issues of how to create such a rectangular hole in the PCB to accept the widened pin…

So, what effect did this pin pointed addition of 2 x 0.1g of metal have? The point being that relieving the bottleneck will reduce the temperature rises upstream all the way back to the source. Much like breaking a dam on a river and watching the upstream water levels fall. In this case the source, junction, temperature rise decreased by 9.1% from 101 degC (over ambient temp of 35 degC) to 95.5 degC. 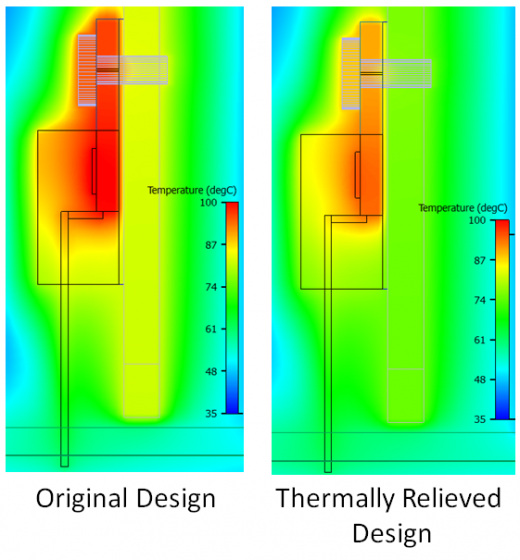 Many people talk about ‘intelligent design’ but this is a sound example of how it might be in reality. People are clever when they can be seen to do little but achieve so much. Imagine the kudos the thermal design engineer would have got if such a minor modification was shown to reduce warranty costs despite the purchasing  decision to buy a such a cheap and unreliable TIM. It might also have kept my friend and colleague John Parry able to watch DVDs for that bit longer!

This article first appeared on the Siemens Digital Industries Software blog at https://blogs.sw.siemens.com/simulating-the-real-world/2012/02/10/bottlenecks-and-interface-materials-part-3-relieving-thermal-bottlenecks-reduce-temperatures/