Joseph Fourier led a full and interesting life. Apart from his obvious legacy of Fourier’s Law that relates the temperature difference across a solid to the steady state heat flow through it he was also once governor of lower Egypt and Permanent Secretary of the French Academy of Sciences. It was with a little more than a passing sense of irony that his belief in wrapping the body up in blankets to keep it healthy led to his death in 1830 as he fell down a flight of stairs at his home whilst dressed in such an attire. There must be a lower scale point it which Fourier’s law breaks down, likely down at the atomic scale where the resolution of free electrons and their effectiveness of transferring energy would be a more appropriate model. I was asked recently (not for the first time) how small a scale could FloTHERM model. Instead of just saying the usual “1 micron but you might experience strange software behaviour due to dealing with such small numbers” I decided to do some tests to provide a more definitive and validatable answer.

Leaving aside radiative heat transfer there are two mechanisms by which heat can travel; conduction and convection. For convection the scale at which the continuum assumption on which the Navier-Stokes equations are based begins to break down can be determined by looking at the Knudson number for the convective flow geometry and fluid [the reader is advised to nod their heads and take this on face value or go on an intellectual fishing trip here]. To determine how FloTHERM fares for conduction modelling at scales so as to resolve the cellular structure on, say, the active layer of an IC, I decided to start as simply as possible and model 1D rod conduction but in a 3D model. O, and make that rod 1 micron long and 0.1 micron wide: 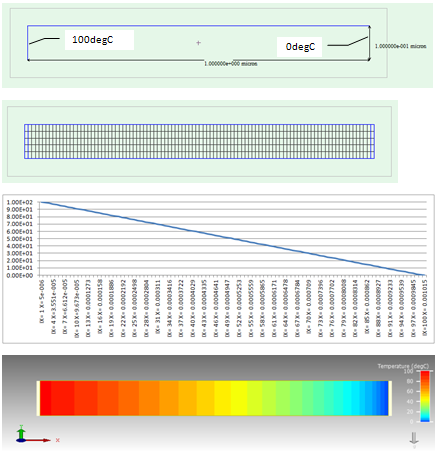 The results look as they would if that rod was 1m or 1km long. Fourier’s law involves terms that define the aspect ration of the geometry but not absolute lengths. If I was a mathematician I would think about using phrases such as scale invariance, but I’m not so I won’t. Q(W) = k A dT / d, where k is the thermal conductivity, A is the cross sectional area of the rod, d is is length and dT is the temperature difference across is. From a geometry perspective it’s A/d that is important.

So far no big deal really. Well that’s what I thought until I tried to consider how ‘big’ the above model was. 1 micron is 1/1000 of a mm. The rod thickness is a tenth of that. As humans were not too good at getting our head round such scales. We haven’t had to to survive so we haven’t evolved the ability to do so. Maybe some cascade images of human hair would help: 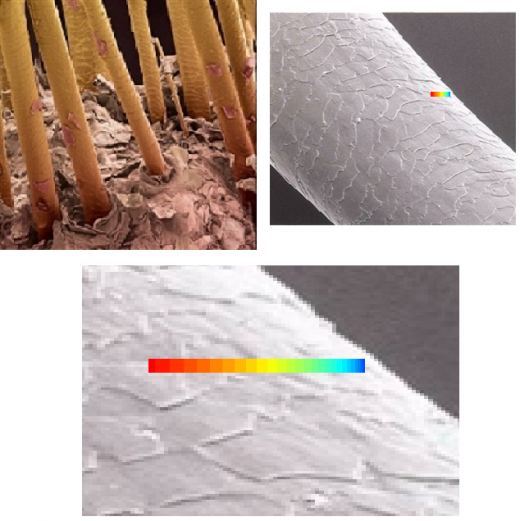 Nope, it’s no use, I can still can’t intuitively feel such scales. Similar to the financial deficit numbers banded around nowadays. Suffice to say FloTHERM can handle these scales. Sure, the double precision solver needs to be used to resolve the small dTs and heat flows and sometimes massive heat fluxes! I’ve also proved that beyond the expected linear variation in a 1D rod, temperature distribution in a 3D substrate with a point source of heat is also accurately resolved: 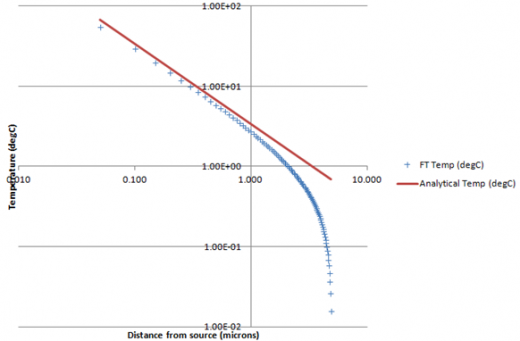 As an adjunct to a previous blog about the resolution of multiple scales in a single simulation, this one I hope indicates the range of possibilities in applying simulation at silicon geometry scales to the ever present need to ensure thermal compliance within and throughout electronic equipment.

Happy Christmas one and all!

This article first appeared on the Siemens Digital Industries Software blog at https://blogs.sw.siemens.com/simulating-the-real-world/2011/12/23/from-megawatts-down-to-milliwatts-sub-micron-scale-thermal-modelling-with-flotherm/