From what little I’ve learnt about the wonderful world of overclocking the use of sub-zero methods of cooling (e.g. liquid nitrogen or dry ice (‘dice’) cooled CPU/GPU mounted pots) are great party or demo pieces but not often employed on a day to day basis. The use of heatsinking and closed loop liquid cooling systems is more common. Either way, overclocking involves the ramping up of processor speeds that results in an increase is component power dissipation that would result in excessive component temperatures (and resulting operational failure) if the extra heat were not to be removed effectively enough. I’m personally not that au fait with the relationship between processor speed and power dissipation. One relationship I am aware of is that CPU power consumption = Capacitance x Voltage squared x Frequency. But that doesn’t include leakage current losses. Short of having access to electrical engineers doing full processor system simulations your thermal engineer will normally just be given a maximum assumed power dissipation, or a TDP (thermal design power). Resulting simulations may therefore tend to overestimate the resulting junction or case temperatures.

Back to overclocking. Using this fixed temperature approach (where I set the CPU Tj = Tj_max = 90degC) I simulated 4 different cooling configurations; no heatsink, a passive heatsink, an active heatsink (+fan) and a LN2 cooled pot. There’s quite a bit of activity in LN2 or dice pot design. The use of holes drilled into the base or rods on the base surface both increase the cooling area, turning them more into liquid cooled heatsinks. The following images all have the same colour temperature range going from 20degC to 90degC. Anything blue is at or below 20degC. Nothing will be above 90degC as that is an input. 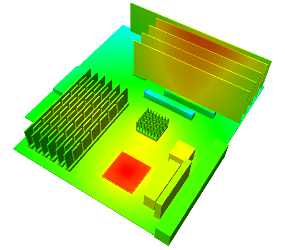 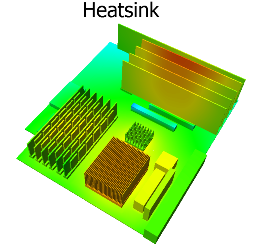 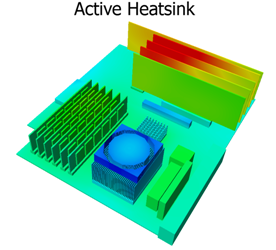 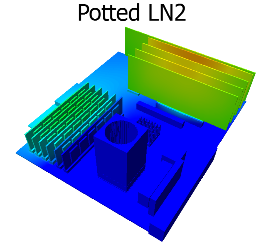 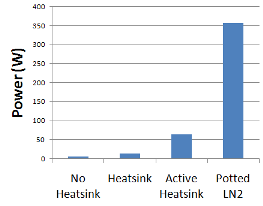 Here’s a chart showing the resulting power dissipations that are achievable under those cooling conditions. The LN2 sub-zero cooling allows for a power dissipation about 6 times that of the (standard) active heatsink cooling approach. Assuming that the CPU voltage has not been altered that would equate to an x6 increase in clock speed as a theoretical maximum. It’s at this stage where I have to admit to some deficiencies in this entire approach when trying to emulate ‘reality’…  A steady state assumption is made where the CPUs operation is such that the entire die reaches a steady and uniform temperature, is this possible to achieve in reality? I doubt it. It’s also not just absolute temperatures that result in failure. Temperature gradients drive thermo-mechanical stresses that result in package damaging strains. The gradients when going from a fixed die temp of 90degC to an LN2 temperature of -196degC are massive, the system would likely fail long before that state was reached. Maybe an overclocker would like to comment on what maximum junction temperatures can usually be reached under sub-zero cooling conditions. Also, how accurate actually is the on-die temperature monitoring system under such conditions? Anyway, if asked the question ‘how much better is LN2 cooling compared to normal active heatsink cooling’ maybe the answer could be ‘about 6 times better, max, maybe’.

I love examining predicted heat fluxes to get a feel as to where the heat is flowing, is it getting out of the system quickly and easily, is it encountering any specific thermal bottlenecks that could be relieved? Using the new ‘heat flux particle animation’ feature in the latest release of FloTHERM, V9.2, you can animate these heat flow paths. Here are what they look like for the 4 cooling configurations.

With no heatsink the heat has to flow down into the PCB, encountering all the thermal resistances the PCB has to offer, or trickle out of the package top. You can’t shove much heat that way without going above Tj_max, in fact you can onyl shove about 6W. With a heatsink the heat conducts up into the fins and then out through the air that moves slowly only due buoyancy. A bit better, but not much. Place a fan on the heatsink and the heat is positively sucked up the fins then blown back down through the fin channels. Put a sub-zero copper pot on top and the heat is has no option but to rush up towards the LN2 at the upper face of the pot base, the Formula 1 of cooling systems.

Thermal Influence on Maximum Current Carrying Capacity January 20, 2021 Superconductors aside, anything that conducts electricity will dissipate heat. The more current that flows, the more heat is dissipated, the…
Flow Visualization and the Beauty of the Vortex Dome January 14, 2021 Fluids tend to be transparent, which is problematic for flow visualization. Rheoscopic fluids get round this by seeding the flow…
Demystifying Electromagnetics, Part 1 - Fields and Analogies March 2, 2021 This blog series will strive to demystify (low frequency) EM by way of pictures and analogies, with as few equations…

This article first appeared on the Siemens Digital Industries Software blog at https://blogs.sw.siemens.com/simulating-the-real-world/2011/06/12/pc-overclocking-and-aftermarket-modding-part-iii/