Automotive aftermarket modification has both mass appeal and a multi-million dollar turnover. Neon underbody lighting, enhanced radiator systems, aero-dynamic side skirts and hood scoops are but some of the ways in which you can part with your hard earned cash for that unbeatable feeling of looking sideways at the person in the car next to you as you narrow your eyes and nod your head slowly, marvelling at the beauty of your own carriage compared to that of your hapless neighbour. “Awwwwwwwwww yeehhhhhhh”. “O dear” was the most I could muster when my eldest got excited about the colour of the lights inside a aftermarket desktop PC chassis he had his eye on.

I took my two eldest boys to the NEC in Birmingham for ‘Gadget Show Live’ recently where there were halls and halls of vendors showing all types of electronic gizmos. From an audio shower (you stood under an innovative metal square plate acting as a speaker, where it played the sound of a shower?!) to a kettle with a simple hand pump so that you could control exactly how much water you needed to boil (bought as a present for the wife; note to other men: maybe you could do better than buy women kitchen appliances as presents, apparently I could have). Most fun though were the PC and gaming areas.

Thermal design of PCs have come on a long way since the days of figuring out where to put the vents in the chassis. FloTHERM’s thermal simulation capability has come a long way as well, keeping track of the ever changing ways in which heat can be removed effectively from an electronics system so as to control temperature rises within it. From TECs and fan sinks to closed loop liquid cooling systems, the insides of home desktop PC systems now look like the illicit offspring of a car engine bay and Optimus Prime. 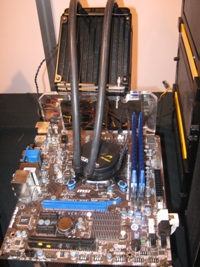 Classical methods of enhanced heat removal from a powerful CPU or GPU involve the use of a heatsink, rather an ‘area extender’, placed on the offending package to transfer the dissipated heat to an enlarged surface area for air to whisk the heat quickly away thus incurring an acceptably small temperature rise ‘upstream’ (as far as the heat flow in concerned) at the heat source, i.e. the die(s) within the package. The more you increase the power dissipation in the package, the larger the surface area of the heatsink has to be to remove the heat and incur the same temperature rise of the package (given a constant air flow through the heatsink). The required surface area nowadays is so large, and the available space so small, that liquid looped systems to remove the heat from the package and pipe it to a more remote air cooled heat exchange where there is more available space, are becoming ever more commonplace. Automotive cooling systems evolved that way about 70 years  ago.

However, it wasn’t the subtleties of the liquid pumped cooling system that caught my sons’ eyes, it was the colour of the heatinks. “Blue, how cool is that?!” Very. After all, who in their right minds would want to buy a system with red(hot) heatsinks? Suffice to say that there is little relationship between surface colour and infra-red radiative loss, that and the fact that under forced convection cooling situations there is even less radiative heat loss compared to convective heat loss. 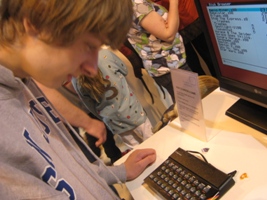 Things have come a long way since the days of the ZX Spectrum. My childhood wonder at that computer has now been replaced with baffled puzzlement by the youth of today. How much scorn will how the youth of tomorrow pour over the PCs of today? Lots, probably, but I’m sure they’ll still want something colourful.

Why does so much effort go into the cooling of such systems? To ensure it doesn’t get too hot and thus fail is the obvious reason. The flip side of that is that you can ramp up the performance (and thus the power dissipation) more if you can remove the heat effectively enough. Welcome to the wonderful world of overclocking, more of that in part II.

Flow Visualization and the Beauty of the Vortex Dome January 14, 2021 Fluids tend to be transparent, which is problematic for flow visualization. Rheoscopic fluids get round this by seeding the flow…
Thermal Influence on Maximum Current Carrying Capacity January 20, 2021 Superconductors aside, anything that conducts electricity will dissipate heat. The more current that flows, the more heat is dissipated, the…
Demystifying Electromagnetics, Part 1 - Fields and Analogies March 2, 2021 This blog series will strive to demystify (low frequency) EM by way of pictures and analogies, with as few equations…

This article first appeared on the Siemens Digital Industries Software blog at https://blogs.sw.siemens.com/simulating-the-real-world/2011/05/24/pc-overclocking-and-aftermarket-modding-part-1/