FloTHERM, and its sister product FloVENT, have been going since 1989. Many in the Mechanical Analysis Division in Mentor have been working on these products for that time, personally I’m up to 15 years. It’s testament to the products and their success that our passion for them continues unabated. V9.2 was released this week, the ~20th release in these product lines. Many vendors will stand up and say that, yep, they’ve listened to their customer base and have responded accordingly with the raft of features in the latest release. That’s all well and good. We however can say that – and prove it. 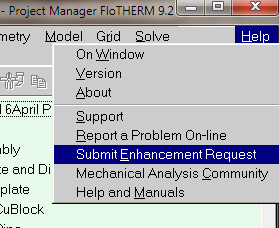 The Mentor IDEAS for Mechanical site (for users with SupportNet access only)  allows users to post software enhancement requests and to vote on other people’s requests. Since its launch 2 1/2 years ago it has accrued 315 product ideas, 154 comments and 1,633 votes. To make it even easier to access the site we even put a link to if from within the products.

If you consider any one area of a software product you can figure out how it could be further improved. Something I’m sure users of Office 2007 can appreciate. It’s not so much the ideas for software change than the priorities that matter. The voting system on the IDEAS site provides a clear indication of issues and areas of the software that the userbase is saying need attention. For V9.2 we have implemented 5 of the top 10 voted requests and 16 features in all from that site. In fact the majority of work on V9.2 was driven by that site. The ‘status’ of each request on that site is changed to reflect what we are considering and, come release, what has been implemented. Users who have posted the request get email notified automatically on the change of status.

The top voted request for this release was the display of ‘bad quality grid cells’ in the Drawing Board application window. We did that. We also extended it to show which objects were responsible for causing those cells allowing users to more easily go on and rectify the problem.

More undo levels. Yep, did that.

Ability to see the cumulative power summary for assemblies and sub-assemblies. Yep, did that.

Rotate the view by defined increments in the Visual Editor, Yep, did that as well.

Derivation of a smoke visibility length scale in FloVENT for determination of egress times during transient fire situations. Did that, that was a nice one.

From a strategic point of view there were some things we wanted to achieve ourselves. An interface between T3Ster and FloTHERM for the experimental derivation of transient CTMs now possible as a consequence of the newly published JESD51-14. An interface between HyperLynxPI and FloTHERM to import Joule heated PCB power nets into a complete 3D thermal simulation for net and FR4 temperature prediction. As well as some things that are just plain as cool as they are useful; animated heat flux particles. Here’s an example of a TO263 on a 4 layer test board in a windtunnel, the heat flux particles are coloured by bottleneck, BN, number:

The heat zooms across the signal and power planes but only slowly burtsts through the dielectric layers. That’s what you get if you don’t model your vias appropriately 🙂

If, like us, you need an outlet to express your love of FloTHERM then feel free to join our ‘just for fun’ Facebook group “We love FloTHERM”. See you there!

6 thoughts about “We Love FloTHERM V9.2”

This article first appeared on the Siemens Digital Industries Software blog at https://blogs.sw.siemens.com/simulating-the-real-world/2011/04/07/we-love-flotherm-v92/