The convergence of technology platforms continues apace, especially in the mobile telephony world. The world of overclockers and case modders isn’t standing still either. For the bargain price of $29.99 you can bag yourself a 5.25 inch bay toaster from CrazyPC.com. The wonderful dichotomy of having a system that requires both electronics thermal cooling and benefits from electronics thermal heating was one that I couldn’t resist bringing FloTHERM to bear on.

The word toaster has its etymological roots in the late Latin verb torrere, to parch or scorch. Torreo, torres, torret, torremus, torretis, torrent; there is nothing quite like the rhythmic calm coming from conjugating ones Latin verbs. No? O well, each to their own eh. Passing electrical current through relatively resistive wire will elevate its temperature, get it glow red hot, hot enough that it’s quite effective in browning up your toast via radiative heat transfer. Nichrome is commonly used, a Nickel and Chromium alloy. Its electrical resistivity is about 100 times greater than copper and does not vary as much with temperature. That coupled with the fact that it’s thermal conductivity is about 40 times lower makes it an ideal heating element material. 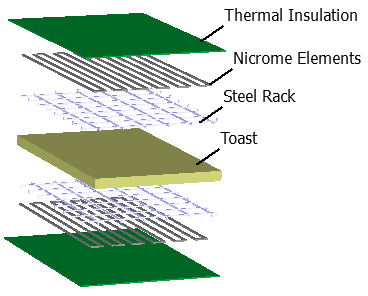 FloTHERM can model the coupled effect of the temperature of the Nichrome heating elements and it’s (albeit weak) relationship to its resistivity. The model simply requires definition of the material properties and the current, the solver does the rest. For the toaster unit itself I’ve not gone so far as to model the controlling electronics, just the main mechanical parts including the Nichrome elements, the insulating plates on which they rest, the steel toast rack and of course the toast itself. It’s not everyday that you ask yourself the question “I wonder what the thermal conductivity of bread is?” Even less frequent is the poser “What on earth is the density and specific heat of bread?”. Any ‘steady state ‘ simulation only requires the thermal conductivity. It’s when you want to start modelling the rate at which things heat up in time do you need the density of specific heat. If you’re interested I’ve gone for k=0.5 W/mK, Cp=2000 J/KgK and rho=200 kg/m3 (the internet, it’s a wonderful thing).

FloTHERM comes installed with a number of ATX chassis template projects. I’ve taken one and replaced one of the bay drives with the toaster assembly. Solve the entire PC unit with no toast in and the elements off to steady state. Then used that model as the initial conditions for when the toast is inserted and the elements turned on. The resulting toast heating is then captured.

The environment in which the toaster is operating is thermally sensitive to say the least. You aren’t going to drive the same number of Amperes through the elements as you would in your typical kitchen based toaster. Toast times will be longer but such is the price to pay for technology platform convergence. This is the temperature map of an English piece of toast after having spent a few minutes in the bay: 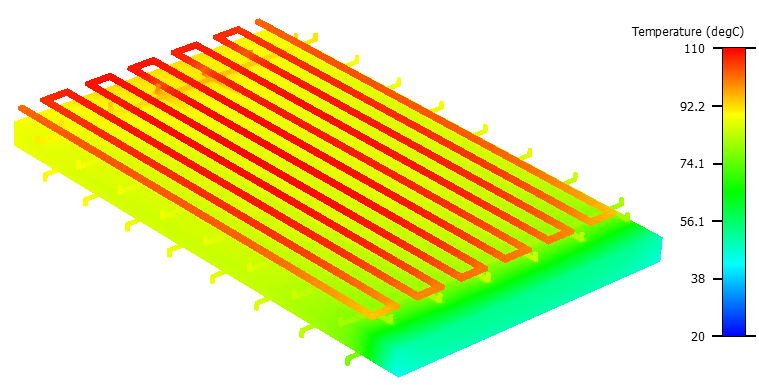 And here is the American bread equivalent: 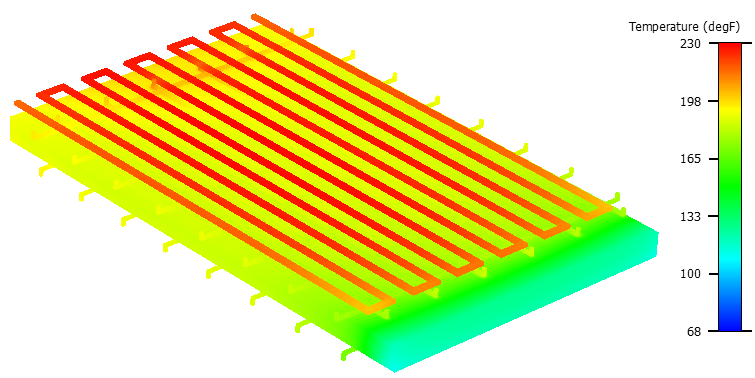 Such ATX chassis operate under negative pressurisation conditions, with the fans sucking air through the system. Any ambient air will be induced in through the grilles and any openings that might exist. My rather simplistic model of the heater does not account for any holes or venting in its casing. The air that is heated convects gently out of the front only for it to be induced back into the chassis through a slot around the bays above it. I can’t see that doing any good for the thermal performance of the rest of electronics inside. But hey, I’m no designer of toasters.

Thermal Influence on Maximum Current Carrying Capacity January 20, 2021 Superconductors aside, anything that conducts electricity will dissipate heat. The more current that flows, the more heat is dissipated, the…
Demystifying Electromagnetics, Part 8 - Losses September 8, 2021
Demystifying Electromagnetics, Part 3 - Magnets April 7, 2021 Why do magnets attract or repel and what's that got to do with conducting loops of wire? Peter and Petronella…
This article first appeared on the Siemens Digital Industries Software blog at https://blogs.sw.siemens.com/simulating-the-real-world/2011/04/01/desktop-pc-with-integrated-toaster-the-future-is-now/