As the ancient proverb goes; a beer fridge without beer is like X Factor, utterly pointless. You’d have thought that by clogging up the insides of the fridge with pesky cans of beer you’d cripple it’s thermal performance. As someone once said of Simon Cowell …”O, how wrong you are”.

When modelling a can of beer in FloTHERM, in fact when modelling any part or object, you have some options when it comes to how to represent it. Would you worry about including a definition of the printing on the side of the can? No, even my pet cat would realise that what’s shown on the side of the can would have no effect on it’s thermal behaviour. Would you explicitly model the inside of liquid inside the can? In theory yes you could but let’s be a bit pragmatic. As already covered when the fridge is upright the temperature variation inside the fridge is such that everything is quite stable, cold on the bottom, hot at the top, stably stratified. The same is going to be true of the temperature variation within each can, the result being that the liquid inside is just going to sit there, more like a solid than a liquid, and somewhat easier to simulate. So, let’s model each can as a solid cylinder with a thermal conductivity representative of the (stationary) liquid surrounded by a thin sheet of metal. With little thought and less attention I came up with a value of 5 W/mK.

Texture mapping is a neat feature of FloTHERM’s post processing window, the Visual Editor (and it’s free and freely available stand alone counterpart, FloVIZ). It’s quite straight forward to create this image and map it to the FloTHERM cylinder object and hey presto, you have a can of FloBEER! The picture is of Hampton Court, seat of the great kings of England most notoriously Henry VIII and just down the road from the office… 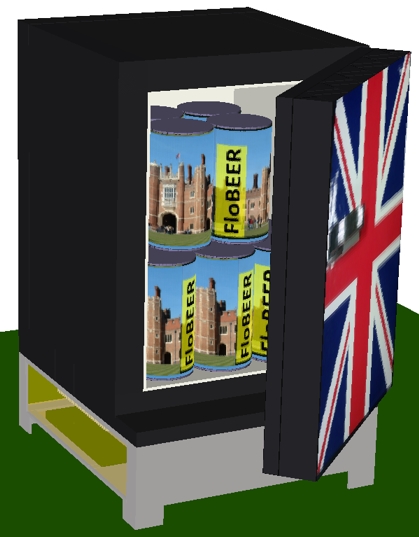 Let’s stock 13 of these cans in the fridge, close the door and see what happens… 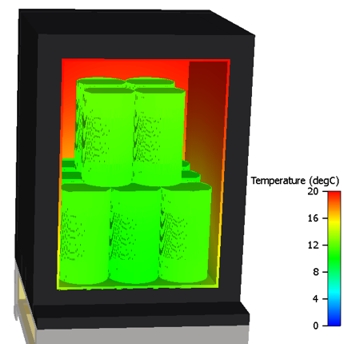 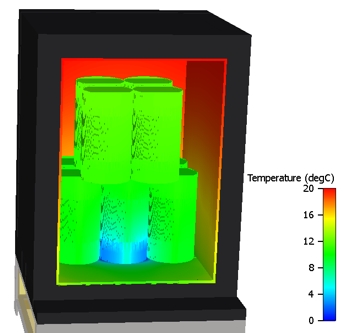 Getting the cold to conduct up into and spread through the cans is a far more effective method of getting the cold from the TEC up, into and around the fridge. Even moving air is no match for the conductive ability of the FloBEER.

Demystifying Electromagnetics, Part 1 - Fields and Analogies March 2, 2021 This blog series will strive to demystify (low frequency) EM by way of pictures and analogies, with as few equations…
Thermal Influence on Maximum Current Carrying Capacity January 20, 2021 Superconductors aside, anything that conducts electricity will dissipate heat. The more current that flows, the more heat is dissipated, the…
Chaotic Fluid Dynamics Part 1 - Rabbits December 8, 2020 A person walks into a bar and asks the bartender "what's the difference between period doubling routes to turbulence and…

This article first appeared on the Siemens Digital Industries Software blog at https://blogs.sw.siemens.com/simulating-the-real-world/2011/01/07/beer-fridge-a-case-study-in-thermal-design-part-4-flobeer/