Beer drinkers are notoriously quiet people and as such would not want to be disturbed by the continuous hissing and whirring of a classic compression/expansion refrigeration cycle type beer fridge. They would argue that’s why both kids and kitchens were invented. Kitchens to put the noisy fridge in, kids to go get the next beer. Electric coolers, fridges that utilise thermoelectric coolers (TECs) to pump the heat from inside the fridge thus keeping it cool, should therefore be more widespread as they are notoriously quiet(er). Unfortunately they are also about 6 times less efficient, requiring much more power to keep the fridge at what is known in the trade (the beer drinking trade) at beerdegreesC.But if you’re just trying to cool a small space that doesn’t require that much cooling work then what’s a factor of 6 amongst friends. A TEC based fridge is much more portable than its hissing shuddering bigger brother. Why, you could even plug such a small fridge into a car cigarette lighter to cool your beer for the long journey.

A TEC works by having an electrical current passed through a chain of semiconductor PN pairs that result in an imposed temperature difference between the two ceramic sandwiched  ‘sides’ of TEC which thus results in a net flow of heat that is pumped through it. It’s like the conductive equivalent of an air moving fan that takes electrical power, spins a motor with blades on it which then induces air flow through it. For a TEC if you supply too little operational current it doesn’t pump enough heat, if you supply too much then it’s pumping performance degrades due to the increased Joule (self) heating that occurs within it. (At least that’s how I visualise these novel little chaps, am sure a TEC expert would correct me on one or more of the points above…). 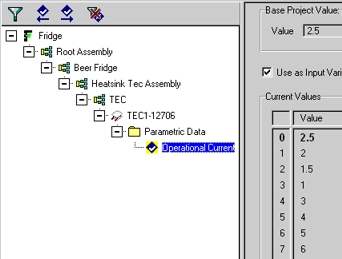 Let’s use FloTHERM, the #1 CFD based electronics cooling simulation tool, to investigate the relationship between the TEC’s operational current and the resulting air temperature distribution within the fridge. FloTHERM has an application window called the Command Center. This window allows for just about any parameter of a FloTHERM model to be varied and for the results of the subsequent scenario of variations to be presented back to the user. In this case I’m going to vary the TEC operational current between 1 and 6 Amps. Here’s what that set-up looks like in the software:

One click of the GO button will have FloTHERM solve all these variants and present the results back. One of the simplest ways to inspect the results is to note ‘monitor point’ temperatures, temperatures at defined points in the model, in this case inside the fridge right at the bottom, in the middle and at the top: 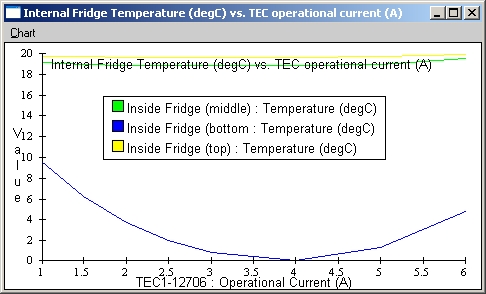 (OK, agreed, not the most visually compelling of graph styles, like many other CAE vendors we realised a long time ago not to attempt to compete with the graphing style and formatting power of Excel, better to focus on the export of simulation data to it).

At about 4 Amps the TEC performs best, the temperature at the bottom of the fridge is lowest. Currents below or above that result in a degradation of performance. Interesting that the middle and top of the fridge are always warm, too warm. Let’s dive down and look at the temperature distributions for the two extremes and the optimal points:

So, how would you get the cold to better spread around the inside of the fridge? How about stocking it full of beer so that the cold can conduct up through it all, or maybe turn the fridge upside down to get the cool air to dump down and spin the air inside the fridge around? All great ideas and ones that will be investigated next time!

This article first appeared on the Siemens Digital Industries Software blog at https://blogs.sw.siemens.com/simulating-the-real-world/2010/12/21/beer-fridge-a-case-study-in-thermal-design-part-2-tec-effect/