Electronics are small and getting smaller. The world in which we live is tending to stay at the same size. The one thing that typifies electronic thermal simulation models is the disparity of length scale that has to be accommodated. FloTHERM has been evolved to handle this disparity for over 20 years.  I, my fellow FloTHERM apostles and hopefully the FloTHERM userbase appreciate this. To prove this point I thought I’d push FloTHERM to the limit by creating … “The Most Extreme CFD Model Ever Ever”.

This previous blog post discussed the issue of boundary conditions, the interface between the 3D space that you actually model, and the outside and beyond that you don’t. An experienced modeller will know where best to make this interface and how to prescribe the conditions there. Experience takes time and in the mean time you’ll likely model too much space so as to push further away potentially erroneous BCs from the thing you’re actually interested in.

For this  >>## “The Most Extreme CFD Model Ever Ever” ##<< I’m going to model a city just to obtain the maximum junction temperature of a die packaged in a PLCC sitting on a PCB in a settop box in an office room in a building in said city. Why? Because as it’s all very well going on and on and on about how great FloTHERM is (which product manager wouldn’t?), the proof of the pudding is in the eating. Rather in this case, the modelling.

The city is called Walkensville in honour of the worlds best actor. A river runs through it, there’s a single main road skirted by a collection of buildings big and small. The city occupies about a square kilometre (250 acres, 10million square foot, it’s a big model). It’s quite a windy day in Walkensville…

O look, there on the river, a boat happily chugs its way to the docks to offload the containers full of scripts that mayor Walken has been asked to read:

Tucked away on the 15th floor of Deer Towers, in a poky little office, Mr. Tumnus, an undersecretary to the mayor is lambasted by his supervisor for both installing a non-standard screen saver and also for taking his desk top modem lid off…. 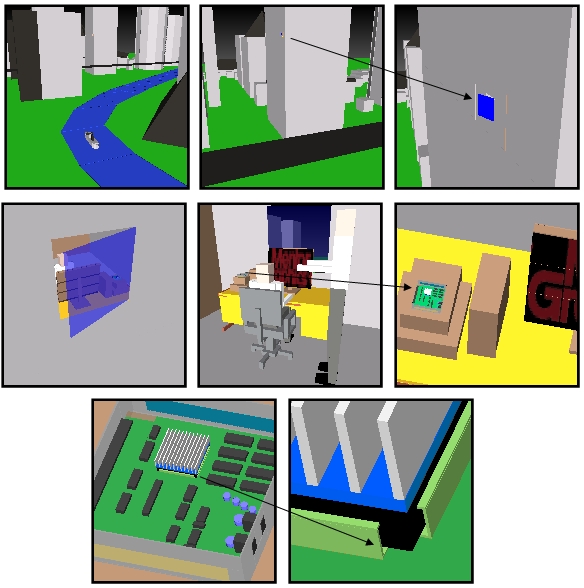 Luckily for Mr. Tumnus, in the simulation world he lives in air flow and heat transfer can be easily observed (bet you couldn’t do that in the back of the wardrobe eh Tumnus): 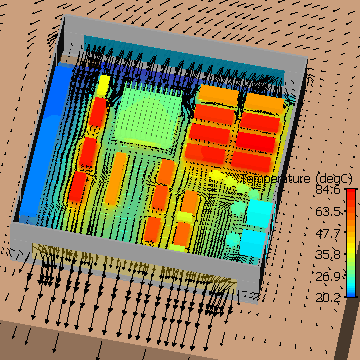 Ahhh… local die hot spot temperatures are on the up: 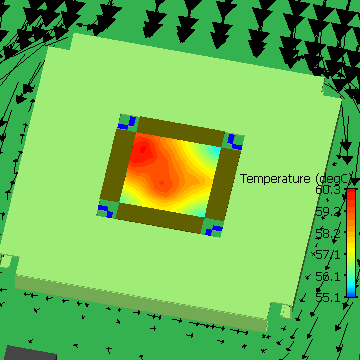 Mr Tumnus in all his fauny wisdom decides to rectify the coming thermal problem by opening the window some more and they all lived happily ever after.

Leaving the fairy tales aside, the ability to model geometry down to the micron length scale in a model 1000m big is a major challenge for any CFD tool.  OK, a length scale ratio of a billion:1 will not be often encountered, the model would be truncated much closer to the electronics. FloTHERM solved this 1 million cell model in 2 hours though. If it can do that then little wonder it is the market leader in its field.

6 thoughts about “The Most Extreme CFD Model Ever Ever”

This article first appeared on the Siemens Digital Industries Software blog at https://blogs.sw.siemens.com/simulating-the-real-world/2010/01/08/the-most-extreme-cfd-model-ever-ever/