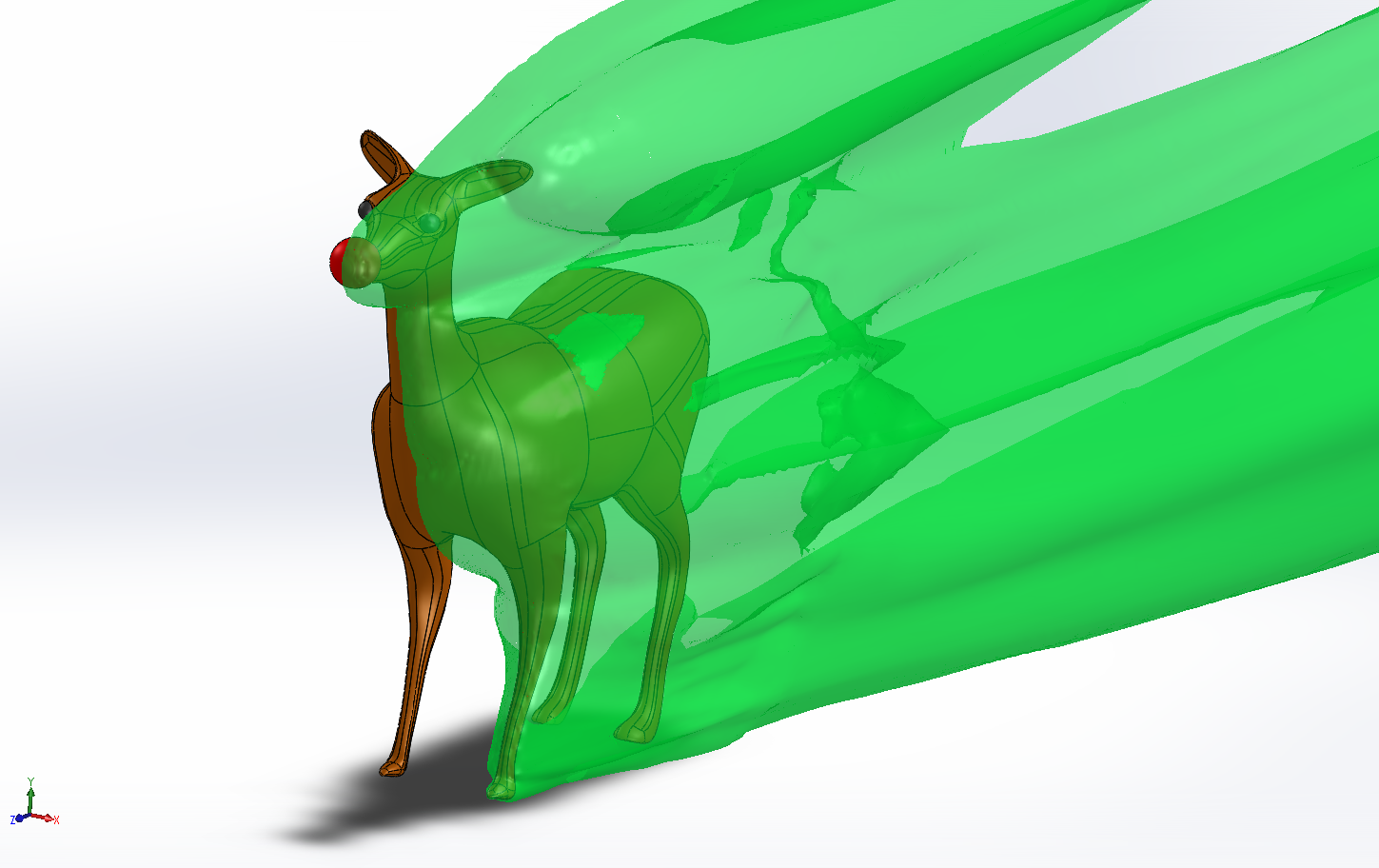 You can believe or you can disbelieve, but is your belief based on evidence?  As children many of us grew up with a tradition of mysterious gifts arriving and were able to suspend disbelief and await the magic of Santa Claus / St Nicholas / Father Christmas.  As we get older and more cynical we question more and believe less…and so sadly, the magic fades.  But what if you could find scientific backing for some of the magic of Christmas, would you believe?

We know an awful lot, but we still don’t know what we don’t know!  A friend of mine is a keen astronomer and he told me that in 2014 872 new exoplanets were discovered.  Fast forward to 2021 and we (mostly NASA) have discovered a further 2,790 exoplanets.  We are living in a modern world where science shapes our thinking and way of life from day-to-day. So who’s to say that Santa is from Earth, and therefore limited to our current scientific knowledge?

Folklore says he might look like an old white bearded man, but can we be certain? And you might also have heard of the Grinch, a green (possibly furry) creature that hates Christmas. Could he be an alien?

And with the typical human reaction that an alien is evil (thanks in part to Hollywood and the Alien series), the natural reaction would be to make the Grinch evil. He might have been spotted by someone in front of the Christmas tree with a gift in his hand and the person thought, “this evil alien wants to steal the wonderful gifts someone wanted to give to me.”  And this rumor spreads making him the evil one, what if instead he was the one that placed it there?   I suspect I am going down a worm hole….

Let’s take a look at some major points that are used to prove that Santa does not exist, I have heard them all since I live in a house with teenagers who love proving adults wrong:

1. There is no known reindeer species on Earth that can fly!

Assuming “Santa” crash landed somewhere near the North Pole with his space ship, far away from any civilization. After the crash his ship was a wreck, he could only salvage some parts of its propulsion system, alloys and navigation system. Too little to get back home (possibly light-years way) but enough to get around our tiny planet. We all know in Star Trek there are inertia dampeners for any shocks and vibrations, something that counteracts the rapid acceleration of an object and makes it possible to survive the acceleration to warp speed. This technology, along with generation of the gravity on board of the space ship (most likely based on a flexible gravity generator, reducing or increasing the gravity in the ship) enables Santa to use that technology on the only thing locally available: reindeer. Perhaps he created a gravity field around his reindeer and newly built sled. At the moment this is technology we don’t fully understand but we know that superconductors can levitate over a magnetic field which the Earth basically has already.  Still with me?

2. There are approximately 378 million children (there are 2.2bn children in total but for some religious / cultural reasons many are not expecting a visit from Santa) expecting gifts within a 31 hour window. This equates to 822.6 visits per second considering an average of 3.5 children per household. This would result in flying speed of Mach 3,000 for an average house to house distance of 1.3km and an overall distance of 120.8 million km.

Now, considering the distance Santa travelled from his home planet to Earth in a reasonable time, these kind of distances should be easy for him. Need a little more evidence?

The closest star system with an unconfirmed exoplanet is Alpha Centauri Bb with 4.36 light years distance and the closest with a confirmed exoplanet is 15.29 light years with four exoplanets orbiting the star named Gliese 876. Now according to Wikipedia, at Warp 9 he would be able to reach Earth in less than a day from Alpha Centauri and about three days from Gliese 876, which is a reasonable travelling time.

Legend has it that he descends each chimney himself to deliver the presents. With technology showcased in Star Trek he could easily beam the presents into a group of houses, maybe an entire town, within the range of the transporter (ever wondered why your Lego was missing a piece?). This makes cleaning up the soot in the house from sliding through the chimney redundant.

Consider other technologies, such as those used by Doctor Who, travelling through time or at least freezing time for a short period would be possible. As we know the time-space continuum is fragile so freezing it for too long or going back in time preventing him from being stranded on Earth would possibly cause catastrophic effects on our universe. But we could safely consider that he flies from village to village or city to city with full impulse, freezes time to have sufficient minutes to beam several presents at once into the houses of the families and then head to another location.

3. The weight of the presents for all the children would be 378,000 metric tonnes considering a 1kg present per child. An average reindeer cannot pull more than 175kg, so this load would require 216,000 reindeers.

We are back to Star Trek technology, they have demonstrated the use of replicators where the device can replicate any usual object such as a toy with ease. The advent of 3D printing also enables the production of toys ‘on the fly’. So a huge storage in his sled is not necessary, and so the standard nine reindeer should be sufficient.

Now, I must confess that I am not an engineer but worked with a colleague who is, to explode some of these myths around Santa. I thought it was going quite well and then he hit me with this:

4. With the huge amount and weight of the presents at 3,000 times the speed of sound the drag force of the sled is enormous and will cause a massive heat load just like the re-entry into the atmosphere. Rudolph, the reindeer in the very front will have to absorb something around 15 trillion joule of energy per second. She would immediately burst into flames and be incinerated and the following reindeer will suffer the same, it will also create an enormous sonic boom. All nine reindeer will be vaporized, Santa would be pinned to the back of his sled by the 17,500 g-forces acting on him and with an approximate body weight of 120 kg he would be squished by his own body forces of 20.6 million Newton.

How do we possibly come back from that?

We have already reduced the weight of the sleigh considerably (see point three), installed inertia dampers (see point one) and used much inspiration from Star Trek where G-force doesn’t appear to be an issue.  We know that technology can ensure modern space craft can withstand the re-entry temperatures. Santa may be so far advanced it might be something as simple as spray-on sun block for his reindeer protecting them from the heat generated by the friction and the ionization effects appearing at such velocities.

So my last question to my engineer colleague, can you tell me with confidence that Santa absolutely could exist?

(And I’m not talking about magic or the force of god, but science we might have not yet reached to understand.)

Here’s a little simulation my engineering colleague did with a reindeer model in Simcenter FLOEFD, a red nose was added so you know which one was Rudolph, the leading reindeer. With a velocity of Mach 25 you can see the temperatures reached at her nose. The iso-surface shows the shock front at Mach 9 velocity. Simcenter FLOEFD considers friction heating and velocities up to Mach 30 for re-entry vehicles such as space shuttles into the atmosphere and is used by Siemens customers for such re-entry calculations.  See the surface temperature on Rudolph and tell me your nose would not get red in such conditions!

Now assuming she is wearing sun block on his fur and nose, with the nose being very sensitive and in this case, as the leading reindeer’s nose is the part that creates the shock cone to break the sound barrier.  This might be the real reason Rudolph has a red nose, it may have been brown at take-off!

Thanks to my colleague Boris Marovic for helping keep my belief in Santa alive, and now I have the evidence to convince my teenage children!

How the robot reindeers and the elves helped Santa save… December 17, 2021 Read about the trials Santa has been through this year and how he solved them using Simcenter software and digital…
4 Myths about AI in CFD April 6, 2021 As Artificial Intelligence (AI) has become more ubiquitous in our everyday lives, so too has confusion about what it is…
Surfboard CFD - Riding the Digital Wave July 29, 2022 The flip-flop engineering symposium Monday, December 9, 2019, 7 pm. Sunset Beach Elementary School Cafeteria, Oahu's North Shore, Hawaii. Two…
This article first appeared on the Siemens Digital Industries Software blog at https://blogs.sw.siemens.com/simcenter/santa_believe/