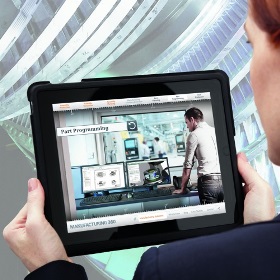 Siemens PLM Software recently participated in the Seoul International Manufacturing Technology Show, Korea’s biggest and one of the world’s four major manufacturing technology shows, with Siemens Digital Factory and Process Industries and Drives divisions to showcase our solutions for the digitalization of machine tool manufacturing.

We enjoyed speaking to approximately 1,380 booth visitors!  Our presence at the show was the perfect opportunity to deliver our digitalization message to the machine tool industry through demonstrating connected solutions between software and hardware.

‘Digitalization in Machine Tool Manufacturing’ was the theme of Siemens booth which highlighted that Siemens is offering seamless solutions starting from the shop-floor and machine tools up to the enterprise level for the future world of digital factories.  Siemens PLM Software demonstrated the following at the booth:


In addition, Siemens PLM Software representative, JaeHyun Lee, shared the PLM focused message about ‘Digitalization in Machine Tool Manufacturing’ during a well-attended seminar during the tradeshow.

Seoul International Manufacturing Technology Show (SIMTOS) 2016 was a huge success because it allowed visits to engage and network with more than 1,130 exhibitors from 35 countries, showcasing their competing technologies and sharing the current and future trends of the manufacturing industry.

Which conferences are you attending this year?  Let us know in the comments section below. Download the FREE Manufacturing 360 app from Google Play or the Apple Store.

What's New in NX for Manufacturing (December 2021) December 10, 2021 The holiday season is upon us, and this year we’re gifting a new release of NX for Manufacturing! With the…
Realize Live + U2U 2021: Digital Manufacturing Experience |… April 28, 2021 Join Us at Realize Live + U2U For the first time, the Realize LIVE and User2User (U2U) events are becoming…
Moving into Metal: CNC Programming of the Quadcopter’s Molds June 21, 2021 In this post, we’ll continue our tour through the Digital Machine Shop as the mold for the plastic top of…

This article first appeared on the Siemens Digital Industries Software blog at https://blogs.sw.siemens.com/nx-manufacturing/siemens-puts-digitalization-in-machine-tool-manufacturing-in-the-spotlight-at-simtos-2016/