There are aspects of life that we just take for granted. Things work in a particular way and obey certain rules and that is the way it is. Sometimes a shock occurs when you suddenly gain a deeper understanding of something. In other cases the shock is when you realize that in other places or at other times different rules applied. I have encountered an interesting of example of such “mind-shift” recently …

A few weeks ago we took a trip into London. Under circumstances too complicated to explain, we met this young student, Archie, who tagged along with us. He had only been away from home [a town in the north of England] for a few weeks. It was interesting to spend time with someone so young, who was quite naïve in many ways, but very knowledgeable in others. Late in the day we decided that it was time to head home. We needed to cross town and were feeling a little too tired for walking, so we planned to take the underground [the “Tube”].

Archie came along with us and admitted that he had never been on an underground train before, but was happy to be guided. We got to the station and he was very interested in the app we used to figure out the route. I stopped at a map and showed him that it was actually quite easy to figure out “the old way”, but the app avoided any possible delays. We instructed him on the ticketing arrangements [which are really simple and straightforward – Transport for London have it nailed] and we were on our way.

At one point, we needed to change trains/lines, so we got off the train and followed all the signs to the other line, descending some distance using stairs and an escalator. We hopped on another train and a few stops later we were at our destination. I was pleased that the Tube had behaved well for Archie’s first experience.

He was looking a little mystified and asked me a question. He wanted to know why we had needed to change levels when we changed trains/lines. I realized that his mental map of the underground system had a slight flaw. He had seen the diagrammatic map and assumed, in the absence of other information, that all the lines were in the same plane – all the same distance below the surface. He thought that, when two lines crossed on the map, that is what they actually did. This was entirely logical and I guess an underground system could be built that way; that is just not the way it is done [anywhere, to my knowledge]. Archie learned something new – he hand a mind-shift in his knowledge of underground systems. 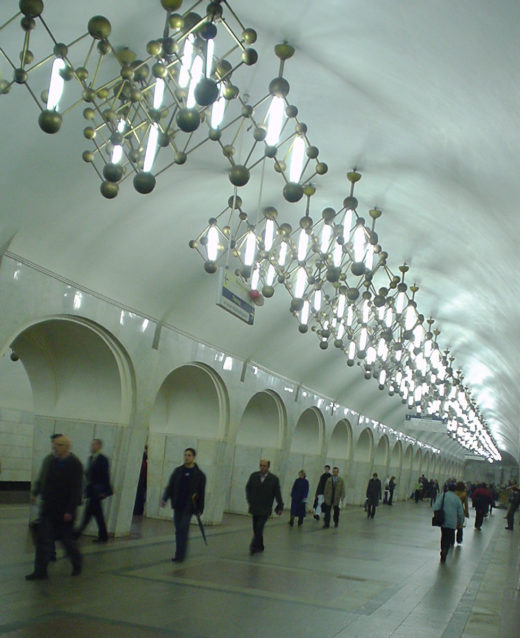 I had a similar experience a few years ago. I visited Moscow on business. I was only there very briefly, but had some free time to explore. I figured that the underground was the best way to get around and I was keen to see the famous stations, which are well known for their decoration and grandeur [they were constructed in Soviet times to double as fall-out shelters and it was decided that it would be good to make them pleasant]. I was quite challenged with tickets, but soon learned what to do. Finding stations was quite hard, as they are signified by a big black “M” on a grey building, which, on a dull day, hardly advertises its presence. The station names were hard to grasp, as the Russian language uses a different alphabet, which was impossible for me to internalize. They make it harder still in a subtle way … 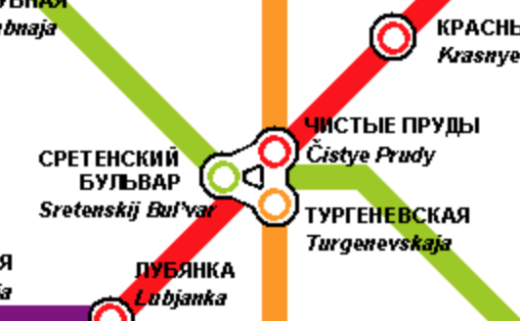 There is a way that I expect underground railway stations to be organized. In London, for example, Oxford Circus station is the crossing of 3 lines: Victoria, Central and Bakerloo. As Archie now knows, these are all on different levels, but the whole structure is called Oxford Circus station. The designers of the Moscow Metro had their own idea: each line has its own stations. Where lines cross the stations are, in effect, stacked on top of one another. To me, it appeared that stations might have two or more different names. This is shown on the map, as this extract illustrates, but it is far from obvious until you have the appropriate mind-shift.

Medical Devices MUST Be Secure September 24, 2021  I recently had the opportunity to present in a Webinar focusing on security needs of medical devices along with Patrick…
OFF-TOPIC: Musing on handedness January 28, 2021 I have always be fascinated by the concept of being right- or left-handed. Almost all of us have this asymmetry…
Quality Considerations of Open-Source Software for Medical… January 17, 2022 Traditionally, software intended to run on a medical device was expected to be written by companies well versed in writing…

This article first appeared on the Siemens Digital Industries Software blog at https://blogs.sw.siemens.com/embedded-software/2019/11/21/the-underground-mind-shift/