I have concluded that perhaps I am not the easiest person to live with. There are a selection of reasons for this, but one is that I do not always know what I want. My brain is in conflict [with itself]. The thing is, I like nice clear rules and guidelines – boundaries, if you like. However, I will often question a rule, if I cannot understand the reason for it or the logic of its implementation. This questioning has, I think, resulted in my being somewhat resistant to being told what to do …

As I wrote about on a previous occasion, there are broadly two kinds of legal system:

I guess there are more countries with (1) and the UK is an example. This results in instructions [rules, laws …] that tell you not to do things, which seems a little negative, but is ultimately quite freeing.

I was in Germany recently and commented to a colleague that I did not see too many instructions telling me not to do things. He said that, first, I should look again and, second, that I should remember my very limited German language knowledge. So, I started making some observations.

I visited the health suite in the hotel, as I wanted to have a sauna to relax at the end of the day. Outside of the sauna were some instructions, which were helpfully in English as well as German. There was quite a long list, most of which was standard stuff about people with heart conditions etc., but 3 rules stood out:

Elsewhere, prohibitions were expressed in other ways. For example, I saw a door [to a small museum] with some instructions on it: 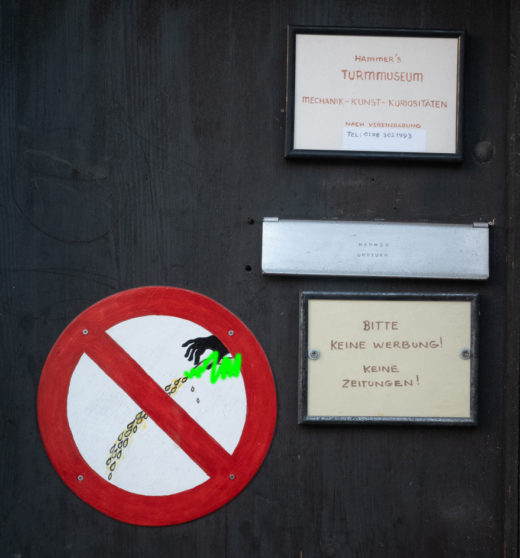 The textual instructions stretched my German somewhat, but I figured out that they said “no newspapers” and “no adverts” – basically “no junk mail”. The graphical instruction was very clear about what they did not want done in their doorway! [Public restrooms are scarce in this part of the city.] The green squiggle is my censorship. If you would really like to see the original for your own amusement, please email me.

I have probably given the impression that Germany is a country where, actually, you are always being told what [not] to do. Maybe that is true, but I smile when I think back to the time we spent New Year in Berlin. On every street corner there was someone setting off rockets from bottles. There were no signs warning about the health and safety issues!

OFF-TOPIC: Musing on handedness January 28, 2021 I have always be fascinated by the concept of being right- or left-handed. Almost all of us have this asymmetry…
OFF-TOPIC: 12 things done or not December 17, 2020 Each year I make a list of “things” that I plan to do. You might call them “goals”, but I…
OFF-TOPIC: The history of today March 18, 2021 When I was at school [a long, long time ago!], I really could not see the use, or more specifically…

2 thoughts about “Telling me what to do”

This article first appeared on the Siemens Digital Industries Software blog at https://blogs.sw.siemens.com/embedded-software/2019/03/07/telling-me-what-to-do/