What makes you describe something as “scary”? I guess there are many things. Possibilities include events that are unexpected, sudden, unexplained and spectacular in some way. Although ultimately a minor event, which resulted in no injury and very little damage, something scary happened to me recently …

A couple of days ago, I came into my home office and sat down at my desk. I keep my desk fairly clear – though not quite as clear as I would like – and what happened next may be an incentive to do a better job. There was a cable on my desk; a micro-USB cable, plugged into a hub [connected to my iMac]; I use it to download pictures from my camera. I moved this cable to one side out of my way to start work. There was suddenly a bang and a flash and the whole house went quiet and the iMac screen went dark. All the power had tripped.

When I recovered from my immediate shock, I switched off a couple of things and headed downstairs to restore the power. I found that the upstairs power outlet circuit had tripped and somehow this triggered the RCD that took out the whole house. I switched the circuits back on and various bleeps told me that the house was rebooting. I went back to my office to survey the damage. 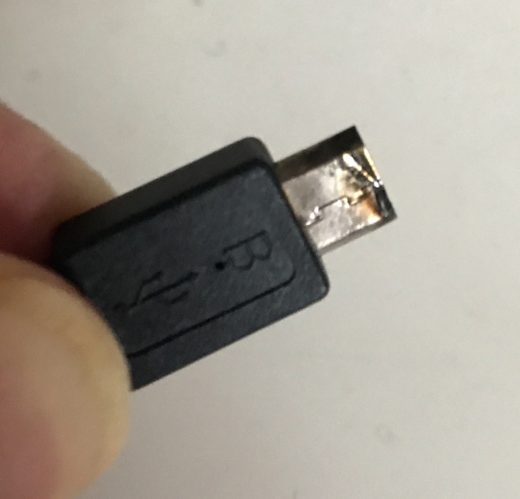 First off, I switched on the iMac, with fingers crossed. It started up just fine. It seems to be quite resilient to power outages and appeared none the worse for the experience. I plugged in the USB hub. It lit up as usual, but when I tried to use a printer, that was plugged into it, the device showed up as “offline”. Plugging it into the computer directly showed that the printer was OK. The hub was clearly a casualty. I nervously checked the USB power outlet [with a Lightening cable] and it appears to be fine. I inspected both micro-USB plugs and the metal outer part of both [where they came into contact] has a part missing and was charred.

What actually happened? As yet, I am not 100% certain. Clearly there was a voltage difference – and, from the amount of damage, I would guess that it was the full 240v mains – between the shells of the two plugs. This is obviously not the way it should be! I suspect the USB power outlet. This is a switched mode power supply [SMPS]. As a humble software engineer, I only [think that I] understand the basics. Instead of using a step-down transformer, as we did in the Good Old Days, an SMPS monitors the input AC voltage and taps off some power for a moment each time it reaches the required output voltage. It seems to me that this has lots of potential [sorry, no pun intended!] for things to go wrong. A knowledgeable friend suggested that whoever installed the socket [that was me ?] may have swapped Live and Neutral; this would often not matter, until it does.

What lessons have I learned? Several, I guess:

And with this cautionary tale, may I take the opportunity to offer you the season’s greetings. If you celebrate Christmas, have a good one. And may all of us have a peaceful and prosperous New Year! See you in 2019.

This article first appeared on the Siemens Digital Industries Software blog at https://blogs.sw.siemens.com/embedded-software/2018/12/20/a-scary-moment/