One thing that I enjoy about writing [mostly] is reading stuff that I have written many years before. Sometimes I wonder what I was thinking of! Other times, I am pleased to see that my views and tastes are either unchanged or have just gently evolved. I wrote about my views on live music about a decade ago. Reading that now, I stand by everything I said, though I wear jeans less often now and no longer use an iPod. Live music still has an important place in my life…

When I go to see musicians perform, I like to be close enough to actually see what they are doing. If I hear a sound, I want to know who made it and how. So, I strongly favor smaller, intimate venues. If I go to a larger concert hall, I make sure that I get good seats, which is generally a matter of getting in quick and paying the price. It was thus yesterday evening. We were at the Birmingham Symphony Hall. This is an amazing venue in the middle of the city [but it only took me 45 minutes to drive home]. It is 30 years old, so it was constructed using modern design techniques and has excellent visibility and acoustics throughout. It has a large stalls area [this is where I always choose to sit – we were 5 rows back] and 4 layers of circles above. The place can seat over 2000 people, but somehow never feels that big. Birmingham is England’s second city and the Symphony Hall is a great example of what it has to offer, yet so many people really think that a trek to London is always necessary. 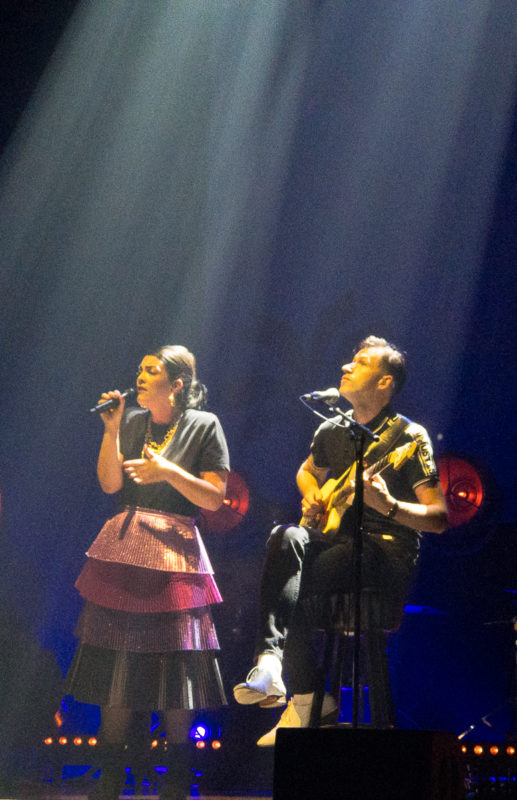 The concert we went to see was by Caro Emerald. She is a Dutch singer with a great band. They are hard to characterize – think 1930’s swing meets 1980s funk, with a bit of jazz thrown in. Very listenable and [I am told] danceable. This is the third time that we have seen her/them at this venue. Caro’s style of performance is very professional and the band are slick, but not mechanical – their characters show through. Recordings of their music are enjoyable, but they really are at their best live. Yesterday evening was somewhat emotional. When she started performing, Caro did not look so happy. She soon explained that her voice was giving out; it had been OK earlier in the day, but now she was suffering. She said that she would do her best for us. And she did. She is a consummate professional and gave a great performance, even if she was challenged by some of the high notes. The audience were right behind her. And so were the band, who performed slightly longer instrumental parts than I might have expected, but they were so good, putting in tons of energy, that everyone thoroughly enjoyed this change of slant to the show. Caro made it through the set and even did a cheerful encore.

Next time Caro Emerald is in Birmingham, we will be there.

Real books vs e-books July 30, 2020 I recently saw a Facebook posting by a friend: “Share this if you love real books.” My initial [and enduring]…
OFF-TOPIC: Musing on handedness January 28, 2021 I have always be fascinated by the concept of being right- or left-handed. Almost all of us have this asymmetry…
OFF-TOPIC: Taming the Bear November 26, 2020 I like to be organized and generally in control of my life, both at work and the rest. This means…

This article first appeared on the Siemens Digital Industries Software blog at https://blogs.sw.siemens.com/embedded-software/2018/11/01/getting-it-live/