Most people seem to agree that having laws – indeed, a legal system within government – is a Good Idea. There will be the odd anarchist who disagrees, but I have found that they usually have anger issues, so I will not poke them with a stick today. It seems strange [to me] that there really is no clear consensus on how laws are implemented, how they are enforced, whether they are obeyed or what they are really for …

There are broadly two ways to approach the implementation of a legal system. The simplest [and, IMHO, easily the best] is to accept that anyone can do anything, unless there is a law that forbids something. The alternative [that I would think results in a larger, more complex legal system] is to allow anyone to do anything, so long as there is a law that permits it. The former applies in my home country and I am happy with that.

I would say that, in England, we have just about enough law to keep reasonable order. Most laws make sense. Some, I feel, are rather “nanny state” – they protect us from ourselves. For example, there is a law requiring car passengers to wear a seatbelt. This law is almost impossible to enforce widely. I feel that this is an unnecessary law; it should be an advisory. The government should “educate” the people – explain that wearing a seatbelt reduces the likelihood of an accident being fatal. This is just treating adults as adults. If someone is stupid enough to ignore the advice and/or sees their future as being a kidney donor, so be it. It should be their prerogative. Oddly, smoking is legal, even though it kills more people than car crashes. However, smoking in public places is illegal, as it may harm others. This gives a few clues as to what law is all about. At other times, we seem to get by with common sense. For example, today it is very hot here and I just went down the street to take a photo [below]. I was wearing shorts and T-shirt. This clothing serves no physical function – it is not keeping me warm/cool or dry or anything. I would not consider not wearing these unnecessary clothes, as it would offend someone’s sensitivities, even though the law would be on my side [i.e. there is no law that forbids this behavior].

The attitude of people to actually obeying laws varies. It varies from one country to another and from one person to another. Overall, I feel that laws should be obeyed, but may still be questioned [that is how they get changed]. A good example is speeding in a car. On more than one occasion someone has asked me why I am driving so slowly. I answered that I am at the speed limit. The response is: “There is nothing to worry about here – there are no speed traps on this road.” To my mind, that is like saying that it is OK to steal from a store if there is no closed-circuit television [CCTV] system. Speeding is speeding; theft is theft. 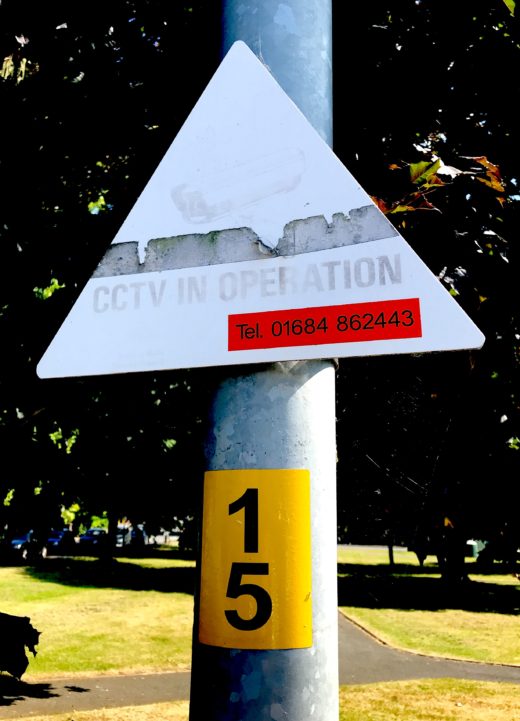 It is common to hear complaints about surveillance – CCTV etc. The same people complain when they are victims of a crime and there was no CCTV. I have a feeling that anyone, who is uncomfortable with CCTV etc., should, perhaps, be arrested, as they clearly intend to commit a crime. I do not care about the cameras, as I have nothing to hide. I took this photo very close to my house. I cannot see any CCTV kit anywhere nearby. Maybe they are spying on my garden. That is OK. I am not planning to do anything illegal.

A very surprising discovery recently was that some people do not know what the law is for. I was in a discussion with a woman, who said that someone else’s behavior should be forbidden by law. This particular behavior may have been sub-optimal parenting, but it was not directly affecting her in any way. She felt that the law existed to implement a system to separate right from wrong. Or, rather, her idea of right from her idea of wrong. That is not the purpose of law. Law exists [or should exist] for the single purpose of protecting one citizen from the actions of others. End of.

The implications of this definition of law are interesting. An example is that it implies that the activities of consenting adults [where the definition of “consent” and “adult” need scrutiny], that does not affect a third party, is their business and not the concern of the law. This would, for example, liberalize marriage laws in most countries; gay marriage and polygamy would be fine …

Join Siemens at Arm DevSummit October 13, 2021 Siemens is once again proud to be exhibiting at Arm DevSummit, a completely virtual event that takes place live October…
OFF-TOPIC: Noisy electric cars October 15, 2020 I am clear that electric cars are the future and I have passed some comments on the matter a while…
Security of Medical Devices – A Changing Regulatory… March 2, 2022 Over the past two decades, medical devices have been increasingly likely to be connected to the outside world using Wi-Fi,…

This article first appeared on the Siemens Digital Industries Software blog at https://blogs.sw.siemens.com/embedded-software/2018/06/28/the-long-arm-of-the-law/