At the end of last week, I was struggling to return home from a short visit to Germany. As I was unable to get a direct flight, I needed to return through Amsterdam. Although airport departure lounges [Why are they called “lounges”? “Holding pens” would be a better term.], I became very well acquainted with the facilities on offer at Amsterdam Schiphol. This resulted in my reflecting on the whole air travel experience …

My first impression of Schiphol is how vast the site is. I guess that, being such a flat country, the Netherlands have the luxury of being able to spread out. This was particularly evident when visiting “airport hotels” which are a considerable distance from the terminals. The shuttle buses may be free of charge, but I am not sure that this is justification for them being so uncomfortable.

In my experience, the range of facilities – shops, restaurants, seating etc. – at airports varies drastically, as does the balance between what is offered landslide and airside. Some airports have minimal facilities landslide, to discourage anyone from hanging around. Most airports have plenty of opportunities for passengers to part with their money on the airside; I am sure that the vendors relish having a captive, bored potential customer base. At the extremes, many US airports have very minimal facilities, whereas elsewhere, the terminals seem to resemble small, thriving towns. Schiphol falls into the latter category.

The first thing a traveler encounters, when going airside, is Security. I have no problem with these facilities being there and I know the staff are just doing their job, so I endeavor to be polite and civil towards them. I am frustrated by delays caused by travelers who are unprepared, maybe buying a bag [at a rip-off £1/€1/$1] for their liquids at the last minute. However, I am somewhat sympathetic, as, even though I know the rules, I can be caught out by changes or inconsistencies. At some airports all shoes come off; at others, it is only boots; at others it is random. Laptops out or not? What about iPads, Kindles, cameras etc.? I have suggested that life would be much simpler [and entertaining], if everyone were simply required to strip naked and drop everything into a big plastic bin, but I am not sure that this would be accepted as an efficiency benefit. 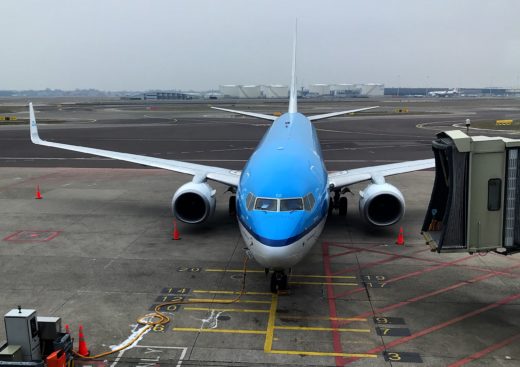 The most significant feature of any terminal is all the people. It is rare that there are not lots of people, who are either squirming on the uncomfortable seating or wandering around – mostly aimlessly. By my perception, most people move too slowly – they amble along, seemingly determined to get in my way. Families seems to stroll 4 or 5 abreast, filling an entire walkway. Large crowds of Japanese people behave much the same, but half of them will be wearing masks. [Why do they do that? Are they afraid of catching something? Or concerned about infecting other people? Or do they just not want to be recognized on CCTV?] Young people often seem to do the reverse: they run recklessly, with a “near miss” on every corner. One of the biggest banes of my life are small “wheelies”. I have no problem with the 4-wheeled type, as they tend to go along with the passenger under good control. The 2-wheeled ones are a menace, as they follow people around like a small dog at heal. The problem is that they are so inconspicuous that tripping over one is just too easy. The worst case is short people who extend the handle to the full length, thus training the case a long way behind them; have they not noticed that they are short and the handle has an appropriate adjustment? 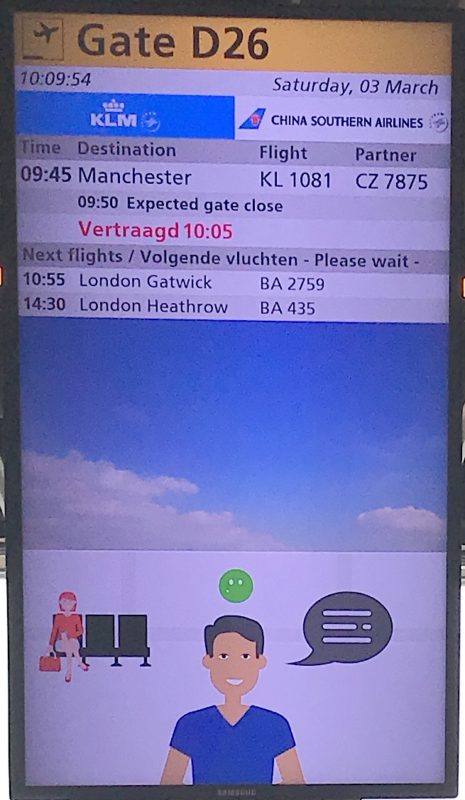 My usual goal is to hole up somewhere quiet to read, work or contemplate. Although I travel quite a lot, I do not use a particular airline often enough to get any useful status, so airline lounges are not an option. So I am stuck in the departure area. I can normally find somewhere that is not too hectic – perhaps an unused gate. The discomfort of seating and availability of a work surface, power and usable WiFi is an annoyance. But this is nothing like as annoying as the continuous announcements. The flight calls just go on and on. Instead of just saying the time, destination and gate, they insist on listing all the airlines that are code-sharing the flight. Then, in Europe, it is often repeated in one or two more languages. The PA is either too loud or distorted to a point of being unintelligible. Why are these announcements needed? There are usually plenty of information screens and it would be easy, using wireless technology, to add more. They could even by interactive touch screens, enabling passengers to check on a particular flight in their own language. This is the 21st Century, after all. This cacophony is often augmented by ear-piercing screeches when someone opens a security door, which happens just a little too often.

So, if I can’t concentrate to read or work, what are my options? The best answers are eating, drinking and shopping. As I said before, terminals often offer a wide choice in these areas. But why are the prices so astronomic? The answer is that they can charge what they like, as the passengers cannot escape. It is blatant opportunism.

All in all, I find myself surprised when people have the impression that business travel is in any way glamorous. If it ever was glamorous, then that was before my time and I have been a frequent business traveler for nearly 40 years.

BTW, why did I say “non-traveler” in the title? Well, I spent a lot more time not going anywhere during my stay at Schiphol. Traveling seemed to be something that other people did. ?

OFF-TOPIC: 12 things done or not December 17, 2020 Each year I make a list of “things” that I plan to do. You might call them “goals”, but I…
OFF-TOPIC: Musing on handedness January 28, 2021 I have always be fascinated by the concept of being right- or left-handed. Almost all of us have this asymmetry…
OFF-TOPIC: 9/11 trivia October 8, 2020 I recently read a book that I found fascinating: The Only Plane in the Sky: The Oral History of 9/11…

2 thoughts about “Reflections of a non-traveler”

This article first appeared on the Siemens Digital Industries Software blog at https://blogs.sw.siemens.com/embedded-software/2018/03/08/reflections-of-a-non-traveler/