I like a simple life. At least, that is what I tell myself. However, working with modern technology, even though it is supposed to “simplify” our lives, commonly introduces just more complexity. I have spent a large part of my life looking at a computer screen. Even though the immediate technology has come a long way – from the fuzzy VT100 terminal of the late 1970s to the 27” 5K retina screen that I use now – I have always been endeavoring to optimize the way that I work. And I am on the lookout for good ideas …

For my everyday computer activity, I like to keep a number of apps running so that they are immediately to hand. At this moment, I have a couple of email clients, WhatsApp, a couple of browser windows, Evernote and MS Word with three documents loaded. This is not a particularly heavy load for the computer, though it was Windows’ apparent inability to do more than the most basic multi-tasking that drove me to use a Mac [and I do not want to go back!]. Having all of these things running and set up so that I can move between them comfortably takes a little organization.

I recently read an account by someone who had just acquired a second screen. She loved the extra space that it provided and went on to get a third. She would have ordered #4, but she had run out of desk space. It seems that the ability to have lots of apps/windows open and be able to move between them was the motivation and perceived benefit. This made me think again as to whether I might need another screen. My conclusion was that I did not need one. 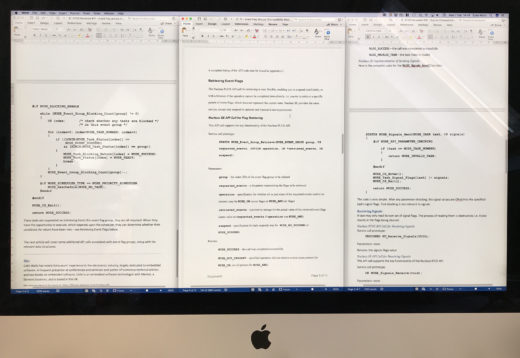 I organize my activity by using virtual screens – Apple calls them “spaces”. Swapping from one space to another can be done various ways, but is generally a keystroke of a trackpad gesture. My usual setup [on my iMac with the 5K 27” screen] is 5 spaces, which I use thus:

If I were to use actual screens, then I would need 4 to use the same organization scheme. Of course, everything would then be visible simultaneously, but is that an advantage? I think not. More likely, I would find it a distraction. On the odd occasion that I require 2 windows, which are in different spaces, side by side, moving one is extremely quick and easy.

I know quite a few photographers who like to have a big, high-quality, calibrated screen on which to display photos, while the Photoshop [or whatever] tools reside on another screen. This makes sense. I can also envisage certain types of work where having a lot of information visible all the time – perhaps financial traders? – requires multiple screens. However, I would conjecture that, for the average user, spaces [or their equivalent on Windows] would be a better, cheaper and easier solution. Am I missing something?

OFF-TOPIC: The history of today March 18, 2021 When I was at school [a long, long time ago!], I really could not see the use, or more specifically…
OFF-TOPIC: The focus on food December 10, 2020 In this extraordinary year, many people have been thinking about food. Some do not have enough - which, in rich…
Security of Medical Devices – A Changing Regulatory… March 2, 2022 Over the past two decades, medical devices have been increasingly likely to be connected to the outside world using Wi-Fi,…

This article first appeared on the Siemens Digital Industries Software blog at https://blogs.sw.siemens.com/embedded-software/2018/02/08/how-many-screens-do-you-need/