From time to time, I like to review my favorite things in some specific category. I have looked at quite a few favorites in the past, including foods, beers, fiction books and OS X features. Today, I am going to talk about my favorite tools. In my experience, most men like to have the right tools [and this is, I observe, a largely male trait, but I am sure that there are many women who like tools or who have similar tendencies]. It is hard to resist browsing in tool shops or looking at market stalls. I have heard certain catalogs and websites referred to as “tool porn”…

I think that most tool aficionados have a clear idea of what a good tool is. It does a single job and does it really well, or it is incredibly flexible and versatile. I guess purists would go for the former definition. I have chosen my favorite six: 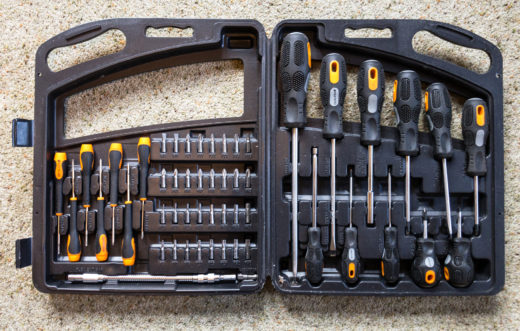 I acquired this first favorite – which is not strictly a tool, but a set – almost by accident. I had long been a keen user of screwdrivers with interchangeable heads, which are, of course, very versatile. But there are times, when a simple, fixed head is ideal. I was taking a microwave into a store to be repaired and I saw this screwdriver kit on the counter and thought that it looked very useful. I asked the guy whether they sold them. He said no, but he could get me one and told me the price. On impulse, I asked him to go ahead and the set has received heavy use ever since.

I have owned various ratchet screwdrivers over the years and they are very useful for one-handed operation. However, when I saw a review of this one, I immediately wanted to get my hands on one. The problem was that they were only available in the US, so I found an eBay supplier that would ship to the UK and placed my order, receiving it in a couple of weeks. They are now readily available in the UK. My enthusiasm was piqued by the unique operation. With an ordinary ratchet screwdriver, you turn one way to insert/remove the screw, but turning back just clicks against the ratchet. This device has a special gearbox that enables the head to turn in the selected direction, regardless of which way you turn the handle. So you twist to insert the screw and get a further insertion turn as you rotate the handle back.

Nearly 40 years ago, I bought an electric drill and I was always very happy with it. However, there were two problems: using the hammer action made a terrible noise, but that is mainly physics; the long flex was always annoying – either getting in the way or not quite long enough. I resisted getting a cordless, rechargeable one, as my experience with rechargeable tools was not very positive – they never had a charge when I needed to use them. When I read about a good brand of drill with Lithium ion batteries, I decided that this was for me. It is, indeed, ideal. I can leave it in its case for months, but, when I need it, it is ready for action. It also has a second battery, so there is enough power for even quite big jobs. The hammer action is also quieter – bonus!

A favorite feature of our house is the wood burner in the kitchen. It is easy to use and provides much welcome warmth from this time of year onwards. The downside is that it needs fuel. Many people that I know purchase bags of pre-cut, ready-dried wood and they are all set. I have done this, but such fuel is not inexpensive. So, I am always on the look out for free wood, which may be logs, palettes or construction off-cuts – if it is free, I will have it. The problem is that much of the wood I get needs cutting to a suitable size. I was always reluctant to get a chainsaw as they are heavy, noisy, smelly and dangerous. Then I found that I could buy a modest sized, electric chainsaw for a very reasonable price. It has a cord, but that is no problem as I have an outdoor power outlet in just the right place. I use it with great care, even though it has some good safety features like a double interlock to start it and an instant chain stop when the power is removed. An hour of sawing can get through a remarkable amount of timber.

I do not know the correct name for this tool, but it does appear to do magic. In the past, I always had a neon screwdriver to check whether an electrical circuit was live. It was just a matter of putting my thumb on one end [to provide an earth connection] and poking the metal end at the cable that might be live. This worked OK and, for decades, was the only option. It was a little awkward and unreliable to use and could even be dangerous. A “magic wand” does the same job, but better. Just point the [non-metallic] tip in the close vicinity of the live circuit and a red glow tells you that it is live. Very simple to use and no contact necessary, so very safe. There are also models that make a noise so that they can be used out of sight. Mine has a built-in flashlight, which is handy. I observe that all professional electricians seem to have a magic wand, which is recommendation enough IMHO.

This is another tool, the correct name of which eludes me. It is just a spike with a rounded handle. I mostly use it to start a hole, which may then be drilled or used to center a self-tapping screw. It can also be used to score a line. It is simple, low-tech and unsophisticated, but I would be lost without it.

Security of Medical Devices – A Changing Regulatory… March 2, 2022 Over the past two decades, medical devices have been increasingly likely to be connected to the outside world using Wi-Fi,…
OFF-TOPIC: Musing on handedness January 28, 2021 I have always be fascinated by the concept of being right- or left-handed. Almost all of us have this asymmetry…
OFF-TOPIC: The history of today March 18, 2021 When I was at school [a long, long time ago!], I really could not see the use, or more specifically…

2 thoughts about “Six of the best – tools”

This article first appeared on the Siemens Digital Industries Software blog at https://blogs.sw.siemens.com/embedded-software/2017/10/05/six-of-the-best-tools/