Last week we went to Stockholm, Sweden to attend a family wedding. We traveled a few days early in order to take a mini-vacation and see some friends who live in the city. Although I have been to Sweden many times on business, I have not really had a lot of recreational time in the city and this was my chance. We got a good deal on flights and accommodation and actually stayed in a hotel that I have commonly used on business trips, which felt slightly odd, but was familiar and convenient.

On Thursday, we set out for the day to do a little exploring, with a plan to end up at a particular museum. We were using public transportation and had the necessary passes to just get on and off as we needed. By the end of the day we had used overground and underground trains, a tram, a bus and a boat! Although the transportation system is integrated and mostly well designed, we inevitably went astray and became a little lost. But we were OK with that, as we had no particular schedule. Eventually, we stepped off the tram outside the museum that we planned to visit. As we prepared to cross the street, I had a shock …

I normally take care with where I keep my phone and other valuables and aim to have zipped pockets. On this day, my phone was living in a pocket against my right thigh. My shock was that the phone was not at home. My thoughts raced. Had I left it somewhere? When had I last used it? I concluded that I was using it for GPS just before getting on the tram. It is possible that I failed to re-zip the pocket. In any case, it was clear that I had been the victim of a pick-pocket.

I sat down, feeling rather nauseous. I was unable to think straight. I realized that I would have felt less bad if my wallet had been stolen, as it contained one credit card [which I could have cancelled immediately] and a tiny bit of cash. The inconvenience of losing my phone was much, much greater. We were just considering what to do to report the theft. Libby got out her phone and suddenly had an idea: “Let’s see whether Find My iPhone can help”.

This is a service and app that does exactly what its name implies – it lets you locate other Apple devices. We knew that it worked, as Libby commonly checks my whereabouts if I am out late in the evening. She fired up the app and the display was very clear: Libby’s iPad was in our hotel room, my iPad and both Macs were offline and my iPhone was about 200 meters away across a park by the edge of a lake. We set off to investigate.

When we arrived within a few meters of the phone, we could see various people near the water’s edge: a group of girls having a picnic, a guy sitting on a bench messing with a phone and another guy sitting on the grass engrossed in something. I quickly walked past the first guy. It was not my phone he was fiddling with, as mine is an iPhone 7 Plus in a very distinctive red color – I could have spotted it from a long way off. We turned our attention to the other guy. Libby had noticed him tuck something under his thigh and, when we got closer, we could see that he was sorting through his wallet – looking at receipts etc. [Later we concluded that it probably wasn’t his own wallet at all!] The app indicated that he must be the thief.

We considered what to do: call the Police [but chances are he would have gone by the time they arrived], attack him [although he was not big, we did not know whether he had a knife or whatever], or simply accost him. We took the last option. I told him that I had seen him on the tram [I was fairly sure that I recognized him], that I had lost my phone and had he seen it? He jumped up and in broken English [he was not Swedish] he said that he had no iPhone and turned out his pockets, showing his [someone’s] wallet and a passport. He looked a picture of innocence. He could have had the phone elsewhere, but I was not inclined to frisk him. 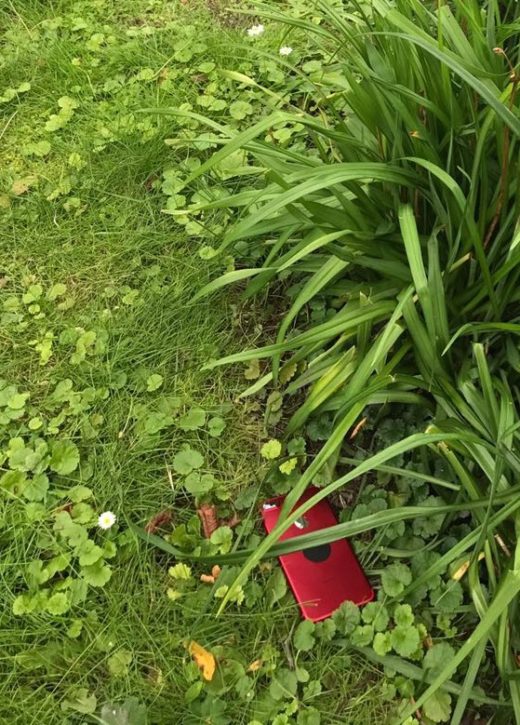 We told him that the phone was nearby and he wanted to help us find it. We realized later that he was trying to distract us from the spot here he had been sitting. In due course, we walked [very calmly] away and I wondered if I was watching my phone disappearing. The app now told us that the phone was offline [i.e. switched off]. We decided to search around where he had been sitting and there it was in the grass! We must have caught him unawares. If he had been smarter [or had more time] he would have thrown it in the bushes. We would never have found it and he could have retrieved it later.

I was very pleased to have my phone back and switched it back on. I then had another shock: the language had been changed to Spanish! I was mystified as to how he could have done this, particularly with so little time. I checked that he had not done any harm – no calls, emails etc. I changed the passcode – this time using the 6-digit option; I had always thought that 4 was enough.

I have since done some research and the consensus seems to be that there is no straightforward way to get past the passcode on an iPhone using the latest iOS with Siri switched off. So how did he do it? I would very much like to know. This is not because I actually want to hack iPhones, but I would like to know what I could do to protect myself. Is a 6-digit passcode better? Should I use the alphanumeric option?

Having spent some time thinking and talking about this incident, I have various thoughts:

A final thought: In the past, phones and other small electronic devices all had a small loop – a point to which a lanyard [i.e. a tethering string] could be attached. This facility would prevent many “quiet” thefts, such as pick-pocketing. Clearly a blatant “grab and run” is still possible, but is that very common? A lanyard of the right length might also prevent a dropped phone hitting the ground. I am pondering the idea of SuperGlueing a loop on to my phone …

Security of Medical Devices – A Changing Regulatory… March 2, 2022 Over the past two decades, medical devices have been increasingly likely to be connected to the outside world using Wi-Fi,…
OFF-TOPIC: Lost and found February 18, 2021 When I come into the house, I hang my keys on the hook. If I want my keys and they…
Real books vs e-books July 30, 2020 I recently saw a Facebook posting by a friend: “Share this if you love real books.” My initial [and enduring]…

2 thoughts about “My iPhone goes walkabout [and then comes home]”