I am not an aviation geek, but, as I travel on planes quite a lot [and I am an engineer], I do take an interest in the features and operation of aircraft. As I have a daughter who works for an airline, my wife often rolls her eyes when listening to our aviation-oriented conversations. [She also takes exception with the first few words of this post – she was reading over my shoulder. 🙂 ]

Last week I had a new experience: I got to ride on an Airbus A380 …

In case you are unfamiliar with these amazing machines, an A380 is the enormous, double-decker plane with four engines. I used to think that a 747 was so big that it should not be able to fly, but the A380 is even more colossal. And they do seem to fly just fine, though their climb to cruising altitude is painfully slow.

I was on the plane for about 6 hours – not too long a flight, but enough time to get a feel for the plane. I could write at length about my experiences, but I thought that I would share just a few novel experiences … 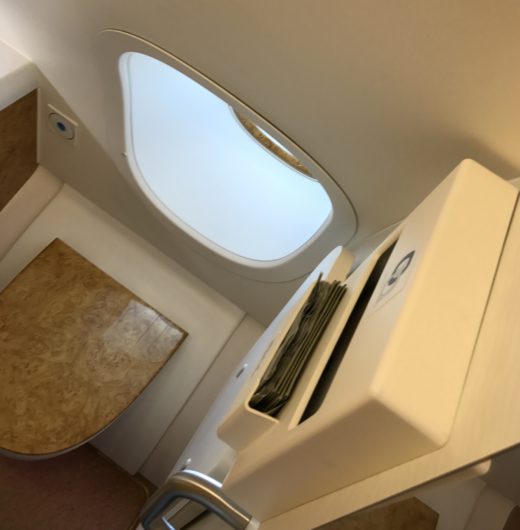 First off: the toilet. On a longer flight, the odd visit to the “washroom” is an uncomfortable, unexciting, but inevitable activity. I cannot really say that the A380 really changes that, but I was surprised to find that the facility, that I chose, had a window. This was something I had never seen on an aircraft before. It contributed to making the “smallest room” a little less claustrophobic. There is, of course, little to worry about being observed using the facilities. If anyone could see you, privacy would probably be the least of your concerns.

I had made my visit to the toilet after lunch, so, when I had finished, I headed to the galley and asked a Flight Attendant for an espresso. He said: “Certainly sir. Shall I bring it to your seat or would you like to sit in the bar?” I elected for the latter. 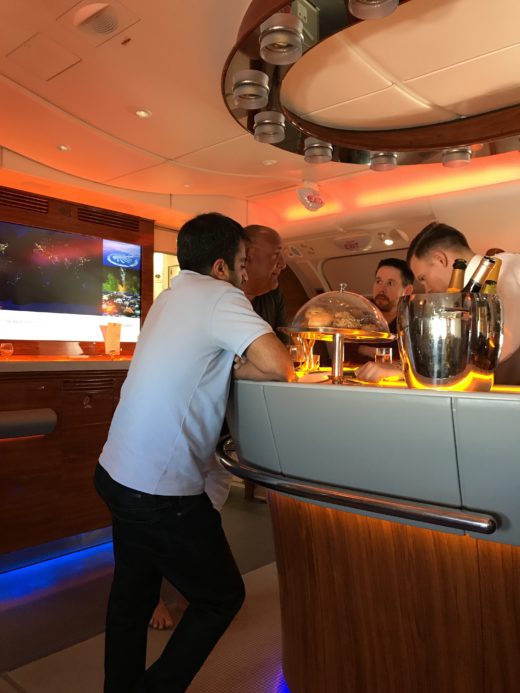 The bar is a circular structure in the middle of the plane and there is nice, padded seating around the outside. I sat there, sipping my caffeine injection, watching a bunch of guys, who were consuming copious quantities of up-market brandy at the bar. [BTW, I was traveling Business, which is not normally an option for me, but these were special circumstances.]

Returning to my seat, I continued my exploration of the inflight entertainment system. I usually like to read, write or work on planes and rarely watch movies. However, there were hundreds to choose from and, with a 19” screen and full-size headphones, it is quite an immersive experience. The movie I chose was Passengers, which I had wanted to see. At one point the spacecraft in the movie was shaking about at the same time as the plane was passing through a little turbulence – this was almost like Virtual Reality!

I enjoy the information facilities of these systems and like to know our speed, altitude, ETA and location. But this aircraft had a [for me] novel feature: external cameras. 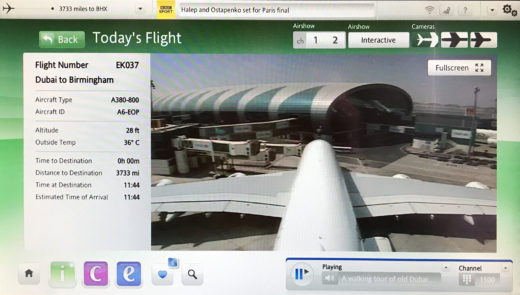 Some years ago – before all this terrorism nonsense – I was lucky enough to spend some time on the flight deck of a 747. The view from up there was awesome. Ordinary windows on aircraft have been a disappointment ever since – the view is never that exciting. But these cameras are something else. On the A380 there was one in the nose looking forward, one below the cockpit looking straight down and another at the top of the tail fin looking forward along the plane. At various times, each one gives an interesting perspective on the plane’s motion. The last one was my favorite.

The engineer in me was curious/upset about a small detail. The video from these cameras were not too great, given what we expect of digital imaging nowadays. The pictures were too bright and washed out. I started wondering why, on such a high-tech plane, this system was sub-optimal. I then realized what is happening [I think]. Unlike all the control systems of the plane, these cameras are just a “nice to have”. They are not at all mission critical. As a result, they will not have been built to the same high specification that would be applied to the aircrafts main avionics. My plane was cruising at 43,000 feet. That is just about as high as any civilian air craft go. At that altitude the radiation is significantly greater than on Earth. This is not a big problem to passengers and crew, as the inside of the plane is quite well protected. All the primary avionics will have necessary shielding. But not these cameras. I am sure that the sensors are exhibiting steady radiation degradation.

Any experts out there? Do let me know if my hunch is correct via email or social media.

OFF-TOPIC: Musing on handedness January 28, 2021 I have always be fascinated by the concept of being right- or left-handed. Almost all of us have this asymmetry…
OFF-TOPIC: The joy of reading November 19, 2020 For as long as I can remember I have liked books and reading. As a child, I was a keen…
OFF-TOPIC: 9/11 trivia October 8, 2020 I recently read a book that I found fascinating: The Only Plane in the Sky: The Oral History of 9/11…

4 thoughts about “The A380 experience”

This article first appeared on the Siemens Digital Industries Software blog at https://blogs.sw.siemens.com/embedded-software/2017/06/15/the-a380-experience/