There has been much discussion in recent years, in most Western countries at least, about marriage – what it means and how it might be reformed. Gay marriage has been discussed endlessly. Very recently, the topical discussion in the UK has been about whether a heterosexual couple might enter into a civil union; a court concluded that they could not. As I see it, all the discussion has been taking place amid great, heart-felt emotions and has been held back by long-standing traditions. All of this has resulted in the muddled thinking that leads to headlines in the less reputable parts of the media.

IMHO, a simple analysis of what a marriage is all about yields logical answers and the possibility for all parties to be reconciled [though this last bit is a long shot] …

So, what is a marriage? In just about every culture [tell me about any exceptions], there are 3 possible elements: 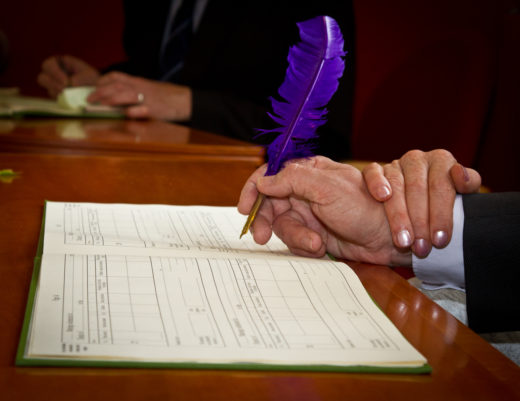 Many people incorporate all 3 parts. Others, who are not religious, skip #1. I will consider each part in turn:

To me, it is the clear separation of #3 that is the crux of the issue. This does occur commonly anyway – I have just attended such a marriage – and I believe that it is common practice in France, for example. Terminology also matters. I feel that #3 by itself might be called a “Civil Union”. However, when combined with any combination of #1 and #2, it might be called a “Marriage”.

There are other factors worth discussing, like: where should a marriage ceremony take place? I addressed this recently.

Most people regard stable relationships to be A Good Thing and a benefit to an ordered society. A civil union or marriage is a good way to parameterize that stability. It is also widely felt that the raising of children in such stable circumstances is in their best interest.

Given that the only part of marriage, that concerns the state, is #3, a number of implications result. First, any two individuals might enter into a civil partnership, as it is just a legal relationship. Gay marriage arguments do not arise. Maybe siblings might wish to bind their lives together in this way. That would not be condoning incest – it is just a legal arrangement. Why should this kind of partnership be limited to just 2 people? Perhaps a small group of friends might wish to commit to one another. Once again, no consideration of any sexual relationships comes into the matter.

Sadly, some relationships founder and may come to an end. Divorce happens and that is usually sad, but often the best option. Again, the parties have the 3 parts to consider and the state should only concern itself with #3, which could be triggered on the formal request of one or more of the participating parties, and contracts may be dissolved in the same way as they might be in other legal contexts.

I am sure that my views are controversial, but I believe the logic is sound. Comments welcome.

Medical Devices MUST Be Secure September 24, 2021  I recently had the opportunity to present in a Webinar focusing on security needs of medical devices along with Patrick…
Security of Medical Devices – A Changing Regulatory… March 2, 2022 Over the past two decades, medical devices have been increasingly likely to be connected to the outside world using Wi-Fi,…
OFF-TOPIC: Musing on handedness January 28, 2021 I have always be fascinated by the concept of being right- or left-handed. Almost all of us have this asymmetry…

0 thoughts about “What is a marriage all about?”

This article first appeared on the Siemens Digital Industries Software blog at https://blogs.sw.siemens.com/embedded-software/2017/02/23/what-is-a-marriage-all-about/