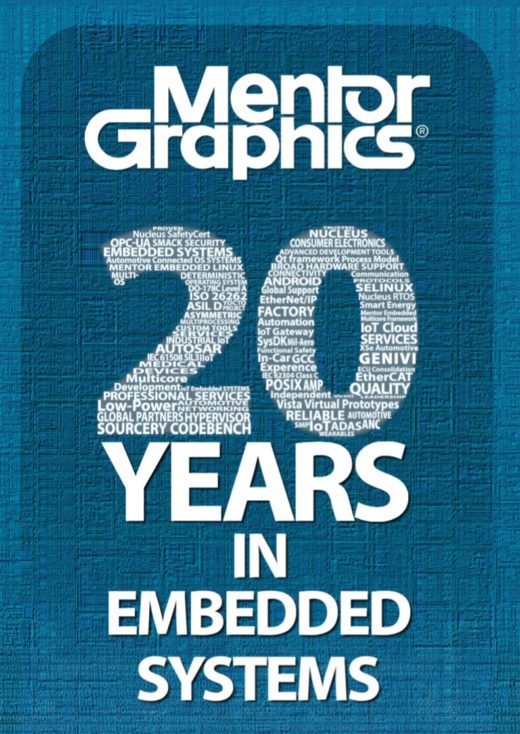 Working at Mentor Graphics, as a specialist in embedded software, has always been interesting, but I am often surprised when I meet people at conferences etc. who have no awareness of the company’s involvement in this technology. This ignorance is surprising for two reasons. Firstly, almost all modern electronic systems are embedded systems; hardwired logic is still developed, of course, but that is a minority activity. The second reason for my surprise is that this year Mentor is celebrating 20 years of offering embedded software products and solutions …

As I have been around a long time, I have often been asked about the history of Mentor’s Embedded Systems Division. Its origins are farther back in time than you might expect – right back in the early days of microprocessors. Here are some key dates:

1974 – Microtec Research is founded. A classic Silicon Valley start-up, started by a couple of guys [sadly not in a garage], one of whom, Jerry Kirk, would continue to be CEO for over 20 years. This was the very early days of microprocessors and developers had little in the way of choice when it came to development tools. Their only real option was an expensive development system from the chip vendor. Microtec was founded to provide another option: embedded software tools that ran on a general purpose computers [though the word “embedded” would not be coined until quite a few years later]. Initially there was a range of assemblers. These were written in Fortran and shipped in source form so that the customer could build them on whatever computer they had available. This seems an odd choice of language, but, at that time, it was the one for which every computer would have a compiler.

1986 – By this time the company had grown and now had around 30 staff in California and one office overseas. That office was here in the UK and I was hired as the #3 employee and the first techie. In due course, this office would become the first development site outside of the US. The range of products had expanded to include a range of instruction set simulators and compilers – C and Pascal, but also Fortran and PL/M were available. The shipping of source code was now rare, as the products were mostly sold as pre-configured binaries for standard host computers: VAX, Sun, Apollo and PC. The big excitement was the impending launch of the XRAY Debugger – the first source code debugger for embedded development. 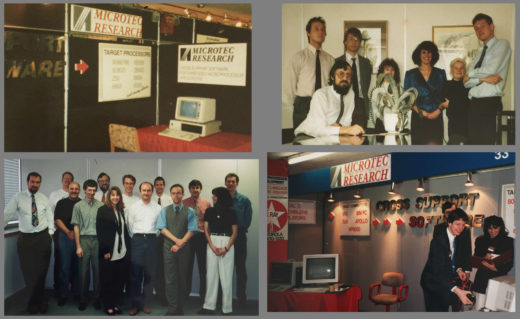 1992 – Microtec acquired Ready Systems [previously Hunter & Ready], who were pioneers in the real time operating systems business. VRTX was probably the first commercial RTOS for embedded developers. Integrating the two product lines would result in the most complete single-source software development solution available at the time. By this time, the company had expanded and there were a number of US offices, along with UK, France, Germany, Sweden, Japan and South Korea and a distributor network worldwide.

1994 – The company had grown to around 350 employees and executed an IPO, becoming a public company, listed on Nasdaq.

1996 – Microtec was acquired by Mentor Graphics – as I recall, it was the largest acquisition the company had made to date. For those of us working at Microtec, it was a bit of a shock. Suddenly we worked for a company with several thousand employees. I recall attending a sales meeting where, in one large theatre, there was the Mentor sales team, who numbered nearly three times as many as the complete Microtec staff. Initially, the division was branded “Microtec – A Mentor Graphics Company”, but, over time, we became the Embedded Systems Division. The years that followed were quite an adventure, with lots of integration, moving offices and reorganizing staff.

2002 – Mentor Acquired Accelerated Technology and, thus, the popular and well established RTOS, Nucleus. This was another time of great change, as the company was integrated. For some years the headquarters of the Embedded Systems Division moved to Mobile, Alabama and this is a key development and support site for the division to this day. Since then, Nucleus has continued to be widely adopted and the technology developed for the needs of recent years, addressing issues like multicore and IoT.

Another dozen years of product development and acquisitions has seen the division move forward and gain strength in a variety of market segments: automotive systems, secure and safety critical systems, medical devices, industrial control and SCADA … You can take a look at all the latest news and what is on offer here.

For me, working with embedded software over the last 30+ years has never been boring. I have worked with some great people, made good friends and been inspired. As I approach the end of my career, I foresee that young engineers, who are just starting out in the world of embedded software, will have some amazing challenges ahead of them. Who knows what they will create?

I am sure that I have misremembered dates or omitted key facts in this short history lesson. If you wish to contribute or correct, please contact me by commenting, email or via social media.

Quality Considerations of Open-Source Software for Medical… January 17, 2022 Traditionally, software intended to run on a medical device was expected to be written by companies well versed in writing…
Safety Certification of Software Modules – What and Why is… July 14, 2022 Standards apply to products, services, and everything in between. Products, processes, services and even people can be certified. According to…
OFF-TOPIC: Musing on handedness January 28, 2021 I have always be fascinated by the concept of being right- or left-handed. Almost all of us have this asymmetry…