It is my opinion that the Internet is the single most important human invention, at least since the wheel. In just a few years, it has transformed the world of business and numerous aspects of our everyday lives. I feel rather lost when its resources are not to hand. However, there are those who eschew the Internet and do not wish to use it at all – I do know a few of these people. They regard the entire system as being mired in pornography and general nastiness. They are right that there is lots of “bad” stuff out there, but, it seems to me, that this just reflects some sad aspects of human society and the good things win out.

We are all conscious of cyber-crime and are told to be vigilant. The Internet has been a godsend to numerous types of criminals, who no longer need to go out at night, wearing a stripy shirt and a mask, carrying a bag labelled “swag”. Some forms of cyber-crime are highly sophisticated – hacking and malware, for example. I can only admire their technical prowess, while detesting their motivations. But other types of online crime rely far more on ingenuity and a knowledge of human psychology and they interest me most of all …

We were recently subject to an interesting scam. Luckily, as a result of our vigilance and the excellent service from my bank, we have not lost any money. But, it could easily have been very different!

Although I do not own the property, I am involved in the management of bookings for a holiday home on Dartmoor in the West of England. My job is to receive, process and progress the bookings and look after the finances. It is a family place, which is not heavily marketed. We always hope to get enough paid bookings to cover the running costs of the house. 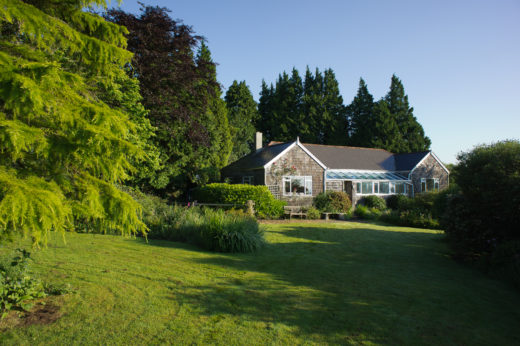 I recently received an email from “Jim”, who wanted to rent the place for a month, starting in about 3 weeks time. As the house was not let for that time, we were delighted at the prospect of a late-season boost to the income. He explained that he was a professional man in the US and his wife was currently in Germany. They have been significant investors in the UK and wanted to come over to assess the situation after the referendum vote to leave the EU. I thought that this was an odd thing to do, but the customer is always right and I quoted him for the rental. He also mentioned that his father was very sick and he might need to come and go during the rental period.

In due course, he asked for bank details and said his wife would send the money [in Euros – fine with me]. After a few days, an envelope arrived in the mail, containing a check [or a cheque, as we would have it] for just about the right amount of money, drawn on a German bank. The odd thing was that it had been mailed in the UK, but many German financial institutions have offices here. I sent the check off to my bank’s Foreign Department.

There were a few things about the booking that troubled me – all of which might have had an explanation:

The bank called me. They were fairly sure that the check was fraudulent and would not be cashed. They asked me how I came to receive it and I explained. They said that their normal procedure would be to credit my account with the money now, but if the check failed to clear [which could take 8 weeks], they would want their money back. They suspected the scammer would ask for some kind of refund before the check had actually cleared. I told them to trash the check and I would ask for an electronic transfer, which is by far the fastest and most common and secure way to move money around Europe.

We did a little research – Google is my friend, as always. It seems that this kind of scam is not uncommon. Normally the scammer sends a cheque for more money than required and asks for a refund in cash or whatever. The check we received was about $400 too much. At this point, it was clear that we were dealing with a scam. At this point, my first thought was to write to Jim and tell him what I thought of him wasting my time and trying to steal from me. But, then, I thought that it might be interesting to string him along just a bit.

Jim anxiously enquired about the money a few times. Eventually, I said the money was in the bank and sat back wondering how he might go about requesting his $400 refund. It then occurred to me that he might be greedier than that. I guessed that his [mythical] father might die, resulting in a cancellation of the trip and a request for a complete refund.

I was right. I have never predicted someone’s demise so accurately before. ? He emailed me saying his father had received his surgery, but there had been complications resulting in his death and Jim and his wife would no longer need the house for the September period. He said that he would tell me how I might make the refund, but he would expect me to retain 10% as an administration charge. Generous eh? I can be generous too …

First off, I replied, offering my condolences on his loss, but saying that I was sorry, but a late cancellation did not qualify for a refund. I commented that his travel insurance should cover it. My expectation was that this would make him very annoyed. I left it a short time and wrote again. I said that I was sorry. My wife had said that I was very mean and should be sympathetic. I said that, if he could send me the necessary information, I would effect the refund.

I did not seriously expect to hear from him again – I only kept him on a string for my own entertainment. But, would he be stupid enough [after riding the emotional roller-coaster that I set going] to send me some bank details? It seems that he is, as he has just sent me the details of a UK bank! I have now been in touch with the online fraud team of the UK Police…

This article first appeared on the Siemens Digital Industries Software blog at https://blogs.sw.siemens.com/embedded-software/2016/08/11/an-interesting-scam/