Maybe it is because I am a photographer, or perhaps it is my aging vision, but light – the quantity and quality – matters to me. I was, therefore, dismayed when, a few years back, the law was changed in Europe to make the sale of traditional incandescent lightbulbs illegal. We were condemned to the awful compact fluorescent bulbs, which were never bright enough and needed time to even reach their feeble maximum brightness. Like many other people, I laid in a stock of traditional bulbs and hoped that technology would improve matters.

In due course, technology delivered. LED bulbs became viable, but initially seemed expensive. So I procrastinated. Then events took an interesting turn …

Not long after I moved into my current house, we had a series of electrical problems. The electrical power would trip at seemingly random times. The electrician found an initial fault and made a correction. Now, only one of the lighting circuits would trip. One day, I switched on the kitchen lights and the circuit tripped, but, just as the lights went out, I heard a tiny crackling noise from one of the fittings. Such a noise from something electrical is never good news. The electrician removed the fitting. All the wiring behind it was black and charred.

In the kitchen there were 14 halogen down-lighters. Each one was 50w, which means that cumulatively they consumed 700w just to light one room! I used to joke that the rest of the town went a little dim each time I turned on our lights. These lights got very hot and the person installing them had neglected to fit the required heat shield behind them [as there is only a small cavity in the ceiling space]. This resulted in the burn-out and, of course, they were an ongoing fire risk. The electrician replaced the fitting and then delivered 14 new LED bulbs. As they run very cool, there was no overheating issues and I now burned just 70w to light the kitchen. Although these bulbs were quite an expensive outlay, they work out cheaper on lifetime alone, compared with the halogen ones, and this is before considering the power saving.

I was pleased with this outcome. When I had finished cursing the guy who installed the dangerous lights [and I do know who it was!], I started to consider the rest of the house. There were many more halogen down-lighters, so they were the priority. But there were also a wide selection of other light fittings. It is quite a large house and I had, in effect, to consider the needs of 14 rooms. I made notes as I went along, doing the upgrade over a period of a couple of months. I learned that there are some key factors, some more obvious than others: 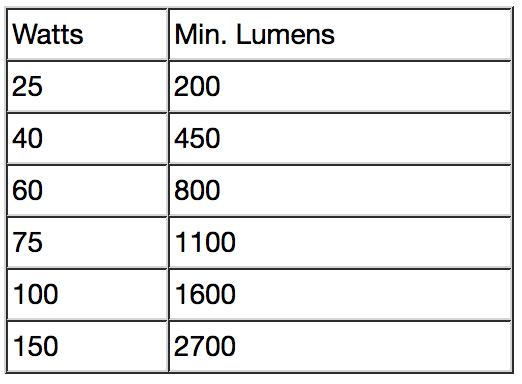 Although I could calculate what I spent on new LED bulbs [and it was quite a lot], I have no real idea of the payback time. I suspect that the savings in power costs and replacement bulbs means that it will not be all that long. I did do an interesting calculation though. I worked out that, if I switched on every light in the house [and it is quite big – there are around 75 bulbs in total], which you would never normally do, of course, we would be using just 600w.

Quality Considerations of Open-Source Software for Medical… January 17, 2022 Traditionally, software intended to run on a medical device was expected to be written by companies well versed in writing…
Security of Medical Devices – A Changing Regulatory… March 2, 2022 Over the past two decades, medical devices have been increasingly likely to be connected to the outside world using Wi-Fi,…
OFF-TOPIC: 12 things done or not December 17, 2020 Each year I make a list of “things” that I plan to do. You might call them “goals”, but I…

This article first appeared on the Siemens Digital Industries Software blog at https://blogs.sw.siemens.com/embedded-software/2016/06/02/let-there-be-light-installing-leds-in-my-house/