A while back, I wrote about a topic that had been preying on my mind. I was concerned about choice and suggested that we, in the Western world generally, have too much of it. I was mainly thinking about the situation in a large supermarket, where I am presented with a dizzying number of options, which I find stressful. My reaction to this is to use smaller shops.

First off, I was recommended a book and very much enjoyed reading it: “The Paradox of Choice: Why More Is Less” by Barry Schwartz. This book covers the same issues as I discussed in my previous blog post, but goes into much more depth. The author is a qualified psychologist and cites extensive research in support of his views. The book covers every aspect of our lives and how we are presented with and make choices. Some more comments on and information about the book may be found here.

The other notable event was the closure of our local greengrocer’s shop. This guy had been running the shop for over 30 years and was having increasing difficulty making a profit, as his main competition was the large supermarkets. I was sad about this and reacted in two ways. Firstly, I resolved to make even more use of the nearby butcher’s shop, as I do not want him to throw in the towel too. The second thing I did was ponder where my vegetables might come from in the future, as there is no other small greengrocer’s nearby. So, I started looking at veg boxes. 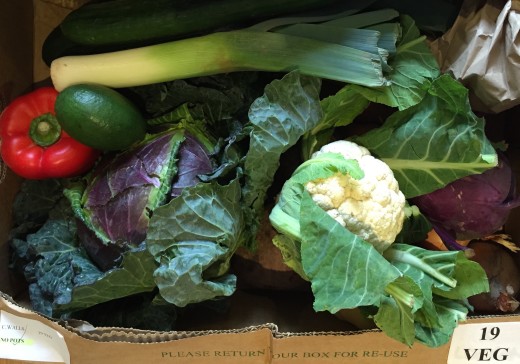 The idea of a veg box is simple enough: a box full of different vegetables is delivered to the customer’s home at a specified interval. Boxes come in different sizes. They are delivered at various intervals – commonly each week. And the customer has varying degrees of control over their contents. I chose the weekly delivery of a “large family” box, allowing the suppliers almost total freedom in what they select. We are not a “large family”, but quite a few people eat at our house in the course of a week. In selecting a supplier, I was concerned that they should be quite local – I did not want my box to be trucked right across the country.

The arrival of the box is still quite exciting. What will be in it this week? It changes the dynamic, when planning of meals is driven by the availability of vegetables. I may still want/need to buy the odd items elsewhere, but I have found that the quantity is about right. What I have succeeded in doing is enriching my life, by eliminating a choice. Instead of wearily selecting veg in the shop and often going for the old favorites, I am presented with a selection. Of course, from a health perspective, a wide range of different veg is ideal.

Other people have told me that they got bored with some of the selections that arrived after many months. Maybe I will – only time will tell.

Medical Devices and the FDA, a History of Change August 26, 2022 As you probably know, devices of all types continue to get more complex, more interconnected, and in the world of…
OFF-TOPIC: Expectations vs reality January 14, 2021 I am of the opinion that disappointment is an underrated emotion. Many people do not see to take it seriously.…
OFF-TOPIC: Lost and found February 18, 2021 When I come into the house, I hang my keys on the hook. If I want my keys and they…

This article first appeared on the Siemens Digital Industries Software blog at https://blogs.sw.siemens.com/embedded-software/2015/11/26/choosing-my-vegetables/