There is an old cliché, which says that the point of traveling is not to reach a destination, but to experience the journey. And I think there may be a lot of truth in that. This is the reason why driving a car is my least favorite way of getting around. When driving, almost all one’s attention is needed to control the car, so there is little opportunity to look around. Public transportation [bus, train, airplane or even taxi] is better because someone else is doing the driving. The best way to fully appreciate an environment is to walk – and I do a lot of that. However, there are limits to the distance one can cover in a limited time. So, the ideal compromise, IMHO, is a bicycle …

I have a bike at home, but I rarely use it. My usual excuses are that the roads around here are not very bicycle friendly [traffic and hills] and my bike is a bit old and clunky – only some of the gears work. For some time, I have been promising myself that I’ll get an new bike, which will motivate me to get out on it.

When we are on vacation, renting bicycles is something we have done in a number of places. I believe the first time was in San Francisco. I have walked over the Golden Gate Bridge lots of times – but cycling was a great new experience. On another occasion we were on Formentera [a small island off of Ibiza] and the rep told us that a bike was a great way to go anywhere on the island, except “up there” – she pointed towards La Mola, the one hill at the end of the island. I took this as a challenge, instead of a warning, and decided to give it a go. My wife was very supportive and took the bus to meet me at the top. I made it. Halfway up I thought that I was going to die, but, after a rest, I was fine. The highlight was coming down again, when I met a group of much younger cyclists pushing their bikes up the hill.

Another vacation was a cycling tour of Syria – sadly not an option any more. That country made sense for bikes, as there were not too many hills. Touring in cities, like Berlin, is also great if they have cycle lanes etc. and are reasonably flat. Last week we were in Boston [which is quite level]. I was there for work, but I had some free time. My wife looked at bike availability and suitability and made a great discovery …

It seems that, some years ago, Boston was cited as the least bike-friendly city in North America [or something along those lines]. The mayor decided to fix that. Lots of cycle lanes and routes were set up and an automated, short-term bicycle renting system installed, called Hubway. [Many other cities have similar systems, with varying success.]

The system is based around a great number of bike parking stations, each of which accommodates around 10-20 bikes. Although they are not immediately noticeable, wherever you are in Boston, it appears, you are not far from a Hubway station. The easiest way to work with the system is to get the free smartphone app. This shows a map, indicating your location as a blue blob in the center of the screen. 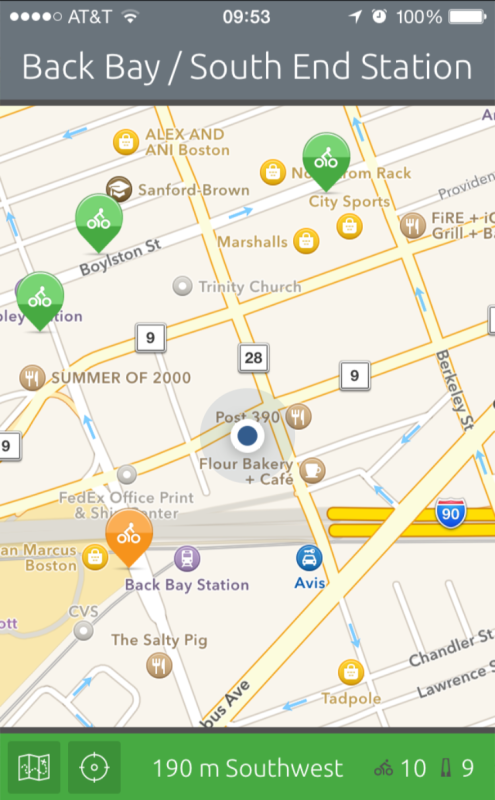 Nearby Hubway stations are shown by little markers. Initially, the nearest one is colored orange. At the bottom of the screen it shows how far away this station is and in what direction. It also indicates how many bikes are parked there and how many empty slots are available. Touching one of the other [green] stations makes it turn orange and its information is displayed. 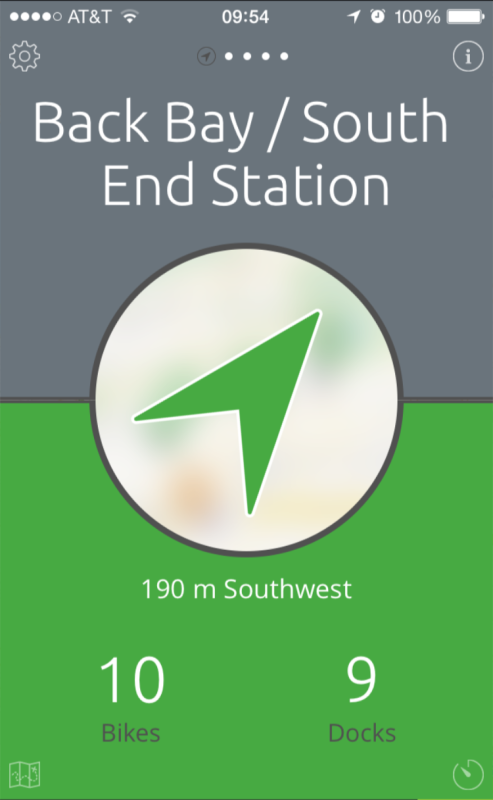 An alternative display gives you a simple pointer to guide you to the nearest station. This would work well if you could clip the phone to the handlebars and follow its guidance. [It would be rather handy if the bikes had a little dynamo with a USB power outlet …]

To rent a bike, you just need to go to a station and buy a pass for, say, 24 hours. This costs $6 – longer durations are cheaper pro rata. You do not actually get a pass – the system simply uses the credit card as ID thereafter. Incidentally, it requests a phone number and ZIP code, which we did not have; I found that any numbers entered would keep it happy. When you are ready to take a bike, you swipe the card and receive a 5-digit code. You select a bike, enter the code and the bike is released. Just adjust the saddle height and you are off.

The loan period is up to 30 minutes, which is fine for hopping from one station to another, even at quite long distances across the city. If you exceed the time, an extra $2 is charged, but this is not very likely to occur. When you arrive at the station, returning the bike is just a question of pushing it firmly into the stand. You can take and return bikes as many times as you like over the term of your pass.

We really enjoyed using this facility and would recommend it, if you are visiting Boston at an appropriate time of year. Although people said that the traffic was unfriendly, I had no problems at all. We were staying in the center of the city, which is a $12 cab ride from the Convention Center, where I was working. One morning, I realized that I still had some time on my bike pass, so I cycled there [only 2.5 miles] – there is a station right outside the entrance. I hope that my employers appreciate my money saving activity!

BTW, I just checked the app on my phone from the comfort of my desk. It tells me that the nearest Hubway station is 3200 miles West …

OFF-TOPIC: Musing on handedness January 28, 2021 I have always be fascinated by the concept of being right- or left-handed. Almost all of us have this asymmetry…
OFF-TOPIC: Expectations vs reality January 14, 2021 I am of the opinion that disappointment is an underrated emotion. Many people do not see to take it seriously.…
OFF-TOPIC: Lost and found February 18, 2021 When I come into the house, I hang my keys on the hook. If I want my keys and they…

This article first appeared on the Siemens Digital Industries Software blog at https://blogs.sw.siemens.com/embedded-software/2015/05/14/go-bike/