This is another posting in my occasional series, where I look at my 6 favorite things in a particular category. A while ago I had a shot at discussing my 6 favorite foods, which is a topic that I will probably return to, as I really have a lot more than just 6 favorites! But today I want to think about food’s complement, drink …

Many people who know me socially may assume that when I say “drink”, I mean “alcoholic beverage”, but actually I do drink other things too!

We are all supposed to drink several pints of water every day – I cannot remember how many. I certainly do not make the target, but I try to get some down me. Actually, when I am really thirsty, I cannot think of anything that quite touches the spot like a pint of cool, fresh water.

Nowadays, I almost never drink bottled water [at home, anyway], but I used to be a keen consumer of Badoit. That all changed in the summer of 2007. The UK, at that time, experienced some severe flooding in many areas. I was lucky as my family were largely unaffected. However, others were less fortunate. This included the two large towns near to us, Cheltenham and Gloucester, both of which lost their mains water supplies for a couple of weeks because the pumping station that served them both was put out of action by the floods. Kind of ironic really that we had more water around than we needed, but they had none that they could use. I saw many people from these towns collecting the emergency supplies of bottled water from shops near to me and heard of lots of people enquiring with friends about the availability of showers and clothes washing etc. It suddenly dawned on me that I was so lucky. I had good, clean water on tap 24/7. Why was I buying bottles?

A couple of additional comments. First off, what is it with fizzy water? Some people seem to prefer it, which I find odd. I can only drink about two mouthfuls of any fizzy drink before I feel full and uncomfortable. I certainly cannot quench my thirst. Second, I learned a neat trick. If I find myself a little hungry between meals, it is easy to grab a snack, which is not a good idea really, but I often do it anyway. However, sometimes I just drink a pint of water and my [apparent] hunger just goes away.

Like many people in my home country, I love tea. Interestingly, I am not so sure that I like the taste of tea, but it is uniquely comforting and refreshing under many circumstances. Unlike the majority of Brits, I take my tea with no milk, so I use glass cups to avoid staining.

Although I start the day with a cup of plain brown tea, normally with breakfast, most of the time I drink Earl Grey tea or Lady Grey, if it is available. A while back, in Finland as it happens, I found some tea called Russian Earl Grey, which was particularly tangy. When I returned home, I did some research, but found that it was unavailable in the UK. Last year, I stumbled across it in a supermarket in France. It seems to be widely available there, so I brought home a small stock.

In warm weather, I like iced tea, though it is not widely drunk in the UK. In the US, that is a common choice for me, as long as I remember to specify “unsweet” in some states. Like with many drinks and foodstuffs in the US, failure to choose this variant results in my getting an almost undrinkably sweet product.

I do enjoy coffee in modest quantities – normally I have a single [generous] cup in the middle of the morning. As I do not do quantity, I focus on quality. So, I have a very nice coffee machine, which takes beans in at one end and delivers espresso at the other. It can do all the milk frothing etc. too, if required. The machine is quite smart [smarter than me some mornings!] and often seems rather demanding – more water, more beans, empty dregs … Of course, it is an embedded system, so perhaps this blog is not so far off topic.

Some years ago, as an experiment, I resolved to give up caffeine for a short time. I was quite surprised to find how physiologically addicted I was to the stuff and decided to reduce my consumption. Hence, my current one cup per day. I looked into how the caffeine content of drinks – coffee in particular – might vary. What I learned was it is broadly a balance between caffeine content and flavor. Essentially, to extract caffeine from ground coffee you need water and time; hence the best processes are filter or French press [cafetiere]. To get flavor, heat and pressure are best; so espresso based coffee [including cappuccino, latte etc.] has the best flavor.

I have always enjoyed wine and, when I was much younger, I aspired to having a house with a cellar and I thought that I might develop some expertise in the matter. However, over the years, having owned several houses, I have never ended up with a cellar. More importantly, the only level of expertise that I have developed is enough knowledge to select from a wine list or supermarket shelf without too many surprises. I am OK with this, as I realized a few things. Firstly, many people with so-called expertize actually just have a good line in b******t. Second, I had a friend who did develop a good palate to the extent that any wine costing less than, say, $100 a bottle was undrinkable for him. I cannot afford to have that kind of sophistication!

I tend to favor red wine, but, in recent years, I am learning to appreciate whites and will explore further. I have always had a geographical dilemma. I have issues from an ecological standpoint with bottles of wine being shipped vast distances, when Europe can produce just about any kind of wine that I might imagine. But, having said that, I guess 75% of the wine I drink is New World [Americas, Australia/NZ, South Africa]. This is partly to do with price, but mainly to do with information. Historically, to figure out what is in a bottle of French wine requires a good knowledge of the châteaux. However, New World wines are mostly varietal – the grape type is clearly indicated and this gives some idea, at least, of what the wine may be like. My current interest is exploring Spanish wine, which has had a less good reputation in the past, but I believe that they have upped their game. 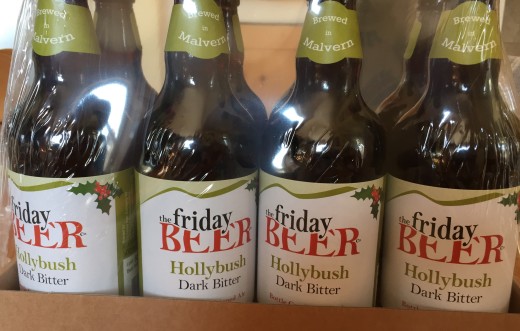 Although I do not go to pubs very often, when I do, I like a pint of good English ale. Such beer has to be kept well, as it is cask-conditioned, which means that it is still “live” and can go off and be most unpleasant without care. I have many favorite beers, but I am quite fond of a new brewery, which started up about half a mile from my house a couple of years back. The Friday Beer Company have the strap-line “Official sponsors of the weekend” – I like that. I usually have bottles of one or other of their products in stock.

Beer should be served cool, but not cold. Anything that is chilled too much loses its flavor [which is perhaps a good thing with some beers I could mention]. There are often jokes about British beer being served “warm”. It is not. It is cool enough to be refreshing, but the flavor is still there. Many years ago I was in a restaurant in Milwaukee [I think it was there] and saw that they sold a very dark beer. When my glass arrived it was served in a frozen glass and was like drinking liquid nitrogen. However, I detected the hint of possible flavor. I asked the server to get me one in a warmer glass and, indeed, it was quite good. I learned that, by ordering one glass ahead of my immediate needs, I could always have one “warmed up” when I needed it.

Commonly my first drink of the day is a glass of chilled orange juice. I like the sharpness at that time of the morning. On a hot day, if I want a refreshing drink with something more than plain water, I have half and half, juice and tap water.

When I am traveling, I commonly end up eating breakfast at my local airport. I am frequently quite shocked by how many people are supping beer or wine at 07:00 – the very idea makes me feel rather unwell. My treat is a very large fresh orange juice. They have a machine that squeezes the oranges right there. I notice that it costs more than beer …

Medical Devices and the FDA, a History of Change August 26, 2022 As you probably know, devices of all types continue to get more complex, more interconnected, and in the world of…
OFF-TOPIC: The focus on food December 10, 2020 In this extraordinary year, many people have been thinking about food. Some do not have enough - which, in rich…
Safety Certification of Software Modules – What and Why is… July 14, 2022 Standards apply to products, services, and everything in between. Products, processes, services and even people can be certified. According to…

This article first appeared on the Siemens Digital Industries Software blog at https://blogs.sw.siemens.com/embedded-software/2015/04/09/six-of-the-best-drinks/